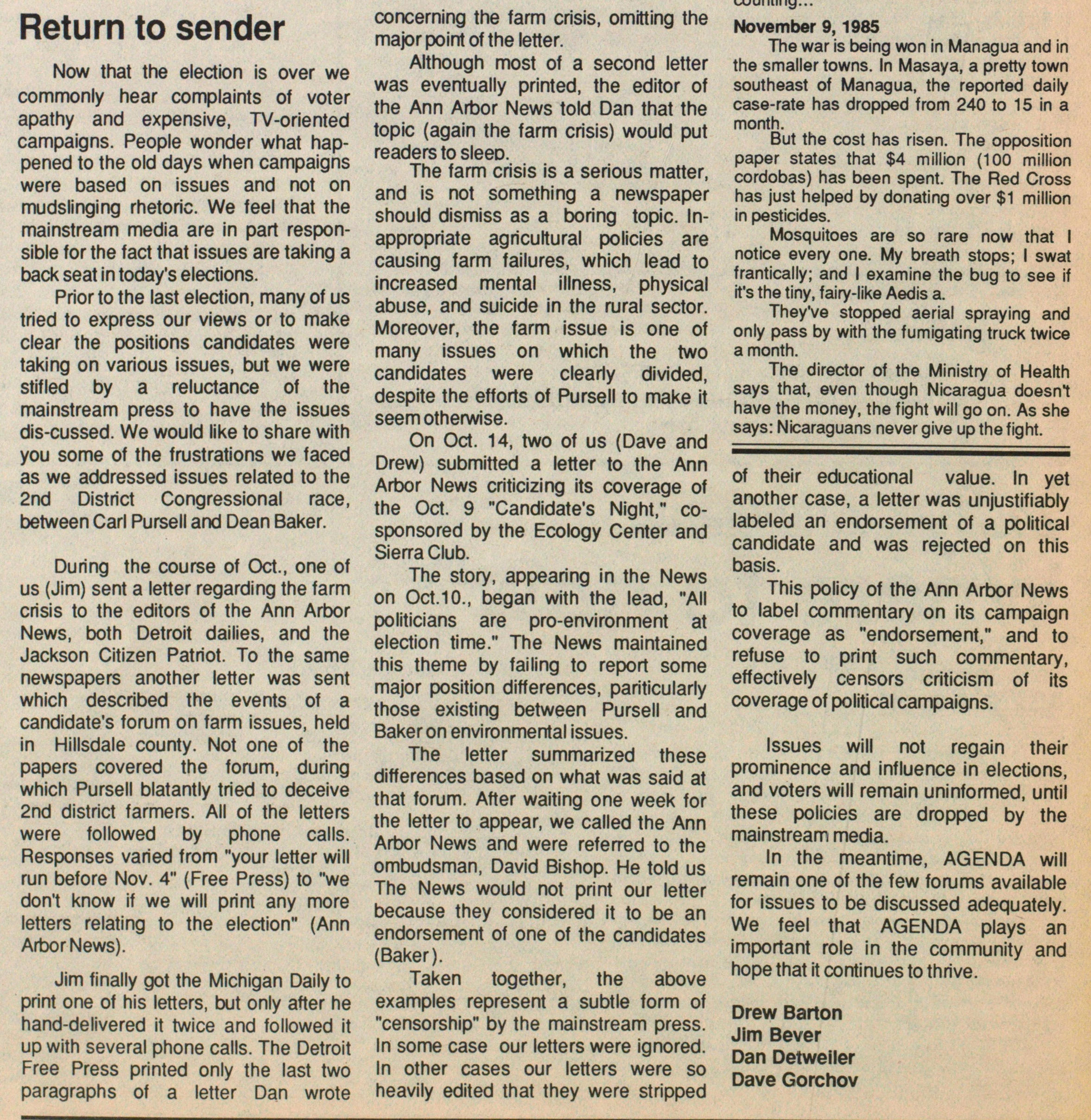 Now that the election is over we commonly hear complaints of voter apathy and expensive, TV-oriented campaigns. People wonder what happened to the old days when campaigns were based on issues and not on mudslinging rhetoric. We feel that the mainstream media are in part responsible for the fact that issues are taking a back seat in today's elections. Prior to the last election, many of us tried to express our views or to make clear the positions candidates were taking on various issues, but we were stifled by a reluctance of the mainstream press to have the issues dis-cussed. We would like to share with you some of the frustrations we faced as we addressed issues related to the 2nd District Congressional race, between Cari Pursell and Dean Baker. During the course of Oct., one of us (Jim) sent a letter regarding the farm crisis to the editors of the Ann Arbor News, both Detroit dailies, and the Jackson Citizen Patriot. To the same newspapers another letter was sent which described the events of a candidate's forum on farm issues, held in Hillsdale county. Not one of the papers covered the forum, during which Pursell blatantly tried to deceive 2nd district farmers. All of the letters were followed by phone calis. Responses varied from "your letter will run before Nov. 4" (Free Press) to "we don't know if we will print any more letters relating to the election" (Ann Arbor News). Jim finally got the Michigan Daily to print one of his letters, but only after he hand-delivered it twice and followed it up with several phone calis. The Detroit Free Press printed only the last two paragraphs of a letter Dan wrote conceming the farm crisis, omitting the major point of the letter. Although most of a second letter was eventually printed, the editor of the Ann Arbor News told Dan that the topic (again the farm crisis) would put readers to sleeD. The farm crisis is a serious matter, and is not something a newspaper should dismiss as a boring topic. Inappropriate agricultural policies are causing farm failures, which lead to increased mental illness, physical abuse, and suicide in the rural sector. Moreover, the farm issue is one of many issues on which the two candidates were clearly divided, despite the efforts of Pursell to make it seem otherwise. On Oct. 14, two of us (Dave and Drew) submitted a letter to the Ann Arbor News criticizing its coverage of the Oct. 9 "Candidate's Night," cosponsored by the Ecology Center and Sierra Club. The story, appearing in the News on Oct.10., began with the lead, "All politicians are pro-environment at election time." The News maintained this theme by failing to report some major position differences, pariticularly those existing between Pursell and Baker on environmental issues. The letter summarized these differences based on what was said at that forum. After waiting one week for the letter to appear, we called the Ann Arbor News and were referred to the ombudsman, David Bishop. He told us The News would not print our letter because they considered it to be an endorsement of one of the candidates (Baker). Taken together, the above examples represent a subtle form of "censorship" by the mainstream press. In some case our letters were ignored. In other cases our letters were so heavily edited that they were stripped of their educational value. In yet another case, a letter was unjustifiably labeled an endorsement of a political candidate and was rejected on this basis. This policy of the Ann Arbor News to label commentary on its campaign coverage as "endorsement," and to refuse to print such commentary, effectively censors criticism of its coverage of political campaigns. Issues will not regain their prominence and influence in elections, and voters will remain uninformed, until these policies are dropped by the mainstream media. In the meantime, AGENDA will remain one of the few forums available for issues to be discussed adequately. We feel that AGENDA plays an important role in the community and hope that it continúes to thrive.