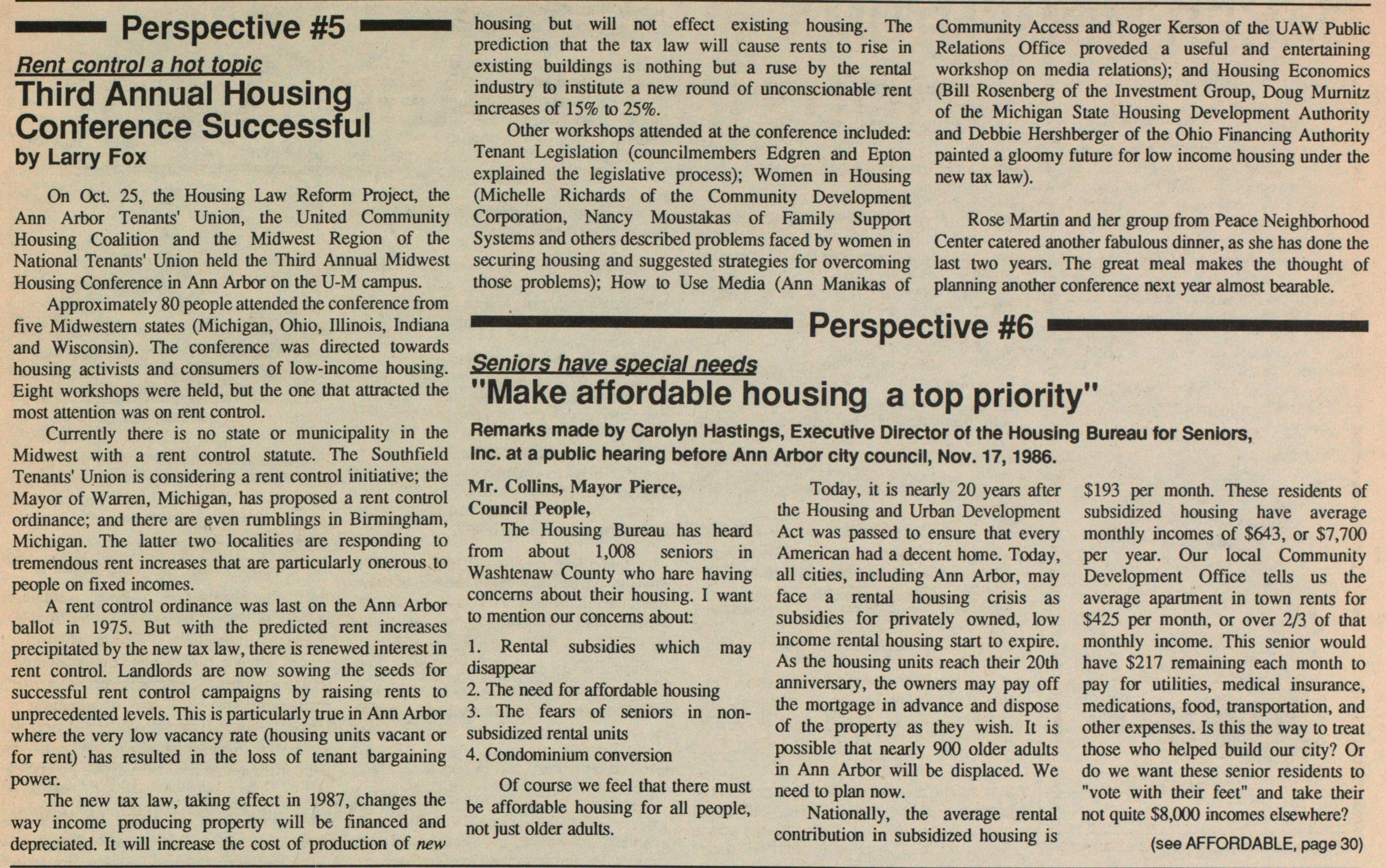 Perspective #5 ■ On OcL 25, the Housing Law Reform Project, the Ann Arbor Tenants' Union, the United Community Housing Coalition and the Midwest Región of the National Tenants1 Union held the Third Annual Midwest Housing Conference in Ann Arbor on the U-M campus. Approximately 80 people attended the conference from five Midwestern states (Michigan, Ohio, Illinois, Indiana and Wisconsin). The conference was directed towards housing activists and consumers of low-income housing. Eight workshops were held, but the one that attracted the most attention was on rent control. Currently there is no state or municipality in the Midwest with a rent control statute. The Southfield Tenants' Union is considering a rent control initiative; the Mayor of Warren, Michigan, has proposed a rent control ordinance; and there are even rumblings in Birmingham, Michigan. The latter two localities are responding to tremendous rent increases that are particularly onerous to people on fixed incomes. A rent control ordinance was last on the Ann Arbor ballot in 1975. But with the predicted rent increases precipitated by the new tax law, there is renewed interest in rent control. Landlords are now sowing the seeds for successful rent control campaigns by raising rents to unprecedented levéis. This is particularly true in Ann Arbor where the very low vacancy rate (housing units vacant or for rent) has resulted in the loss of tenant bargaining power. The new tax law, taking effect in 1987, changes the way income producing property will be financed and depreciated. It will increase the cost of production of new housing but will not effect existing housing. The prediction that the tax law will cause rents to rise in existing buildings is nothing but a ruse by the rental industry to institute a new round of unconscionable rent increases of 15% to 25%. Other workshops attendcd at the conference included: Tenant Legislation (councilmembers Edgren and Epton explained the legislative process); Women in Housing (Michelle Richards of the Community Development Corporation, Nancy Moustakas of Family Support Systems and others described problems faced by women in securing housing and suggested strategies for overcoming those problems); How to Use Media (Ann Manikas of Community Access and Roger Kerson of the UAW Public Relations Office proveded a useful and entertaining workshop on media relations); and Housing Economics (Bill Rosenberg of the Investment Group, Doug Murnitz of the Michigan State Housing Development Authority and Debbie Hershberger of the Ohio Financing Authority painted a gloomy future for low incomc housing under the new tax law). Rose Martin and her group from Peace Neighborhood Center catered another fabulous dinner, as she has done the last two years. The great meal makes the thought of planning another conference next year almost bearable.