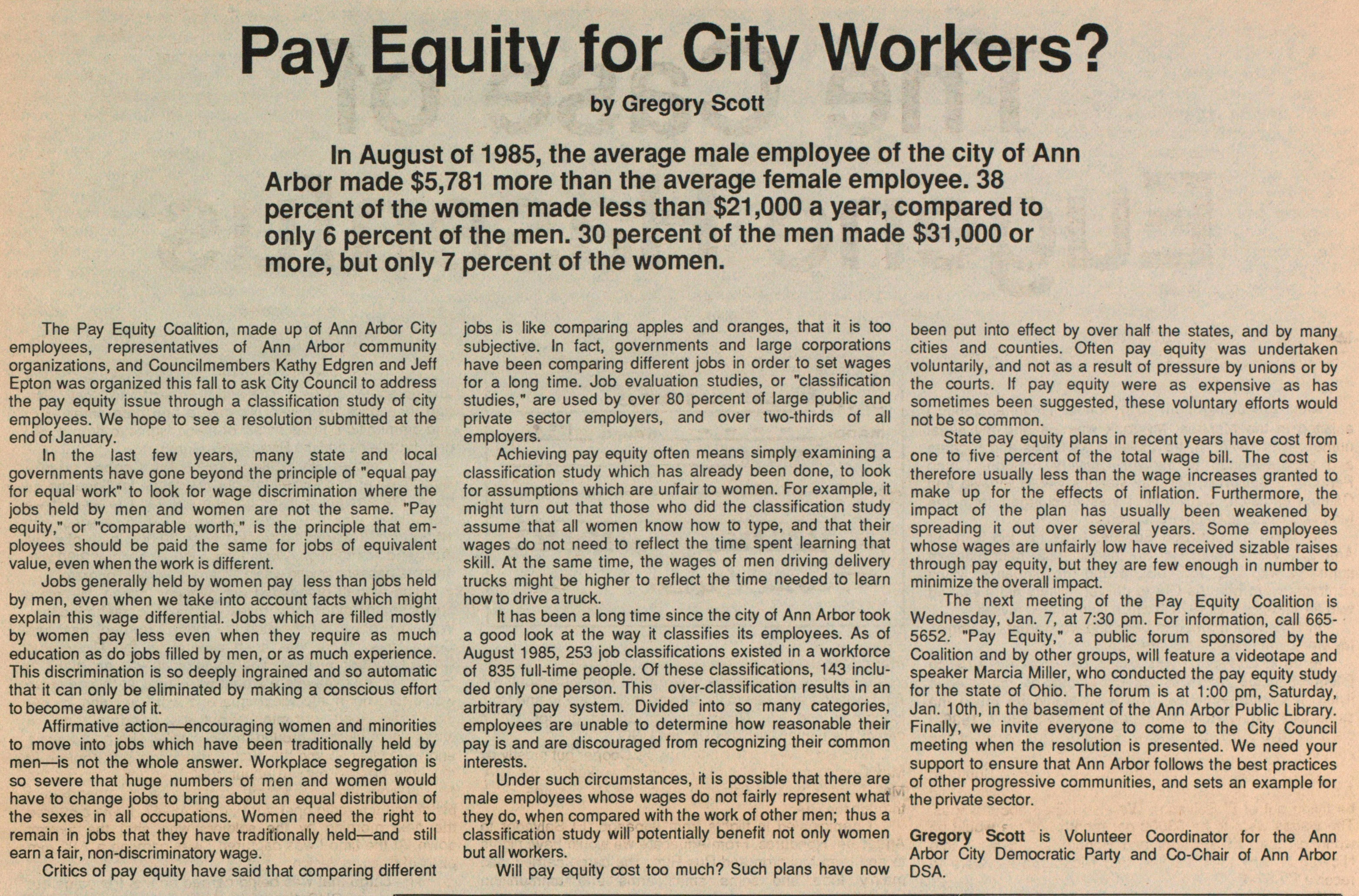 In August of 1985, the average male employee of the city of Ann Arbor made $5,781 more than the average female employee. 38 percent of the women made less than $21 ,000 a year, compared to only 6 percent of the men. 30 percent of the men made $31 ,000 or more, but only 7 percent of the women. The Pay Equity Coalition, made up of Ann Arbor City employees, representaties of Ann Arbor community organizations, and Councilmembers Kathy Edgren and Jeff Epton was organized this fall to ask City Council to address the pay equity issue through a classification study of city employees. We hope to see a resolution submitted at the end of January. In the last few years, many state and local governments have gone beyond the principie of "equal pay for equal work" to look for wage discrimination where the jobs held by men and women are not the same. "Pay equity," or "comparable worth," is the principie that employees should be paid the same for jobs of equivalent value, even when the work is different. Jobs generally held by women pay less than jobs held by men, even when we take into account facts which might explain this wage differential. Jobs which are filled mostly by women pay less even when they require as much education as do jobs filled by men, or as much experience. This discrimination is so deeply ingrained and so automatic that it can only be eliminated by making a conscious effort to become aware of it. Affirmative action - encouraging women and minorities to move into jobs which have been traditionally held by men - is not the whole answer. Workplace segregation is so severe that huge numbers of men and women would have to change jobs to bring about an equal distribution of the sexes in all occupations. Women need the right to remain in jobs that they have traditionally held - and still earn a fair, non-discriminatory wage. Critics of pay equity have said that comparing different jobs is like comparing apples and oranges, that it is too subjective. In fact, governments and large corporations have been comparing different jobs in order to set wages for a long time. Job evaluation studies, or "classification studies," are used by over 80 percent of large public and private sector employers, and over two-thirds of all employers. Achieving pay equity often means simply examining a classification study which has already been done, to look for assumptions which are unfair to women. For example, it might turn out that those who did the classification study assume that all women know how to type, and that their wages do not need to reflect the time spent learning that skill. At the same time, the wages of men driving delivery trucks might be higher to reflect the time needed to learn how to drive a truck. It has been a long time since the city of Ann Arbor took a good look at the way it classifies its employees. As of August 1985, 253 job classifications existed in a workforce of 835 full-time people. Of these classifications, 143 included only one person. This over-classification results in an arbitrary pay system. Divided into so many categories, employees are unable to determine how reasonable their pay is and are discouraged from recognizing their common interests. Under such circumstances, it is possible that there are male employees whose wages do not fairly represent what they do, when compared with the work of other men; thus a classification study will potentially benefit not only women but all workers. Will pay equity oost too much? Such plans have now been put nto effect by over half the states, and by many cities and counties. Often pay equity was undertaken voluntarily, and not as a resuit of pressure by unions or by the courts. If pay equity were as expensive as has sometimes been suggested, these voluntan efforts would not be so common. State pay equity plans n recent years have cost from one to five percent of the total wage bill. The cost is therefore usually less than the wage ncreases granted to make up for the effects of inflation. Furthermore, the impact of the plan has usually been weakened by spreading it out over several years. Some employees whose wages are unfairly low have received sizable raises through pay equity, but they are few enough in number to minimize the overall impact. The next meeting of the Pay Equity Coalition is Wednesday, Jan. 7, at 7:30 pm. For nformation, cali 6655652. "Pay Equity," a public forum sponsored by the Coalition and by other groups, will feature a videotape and speaker Marcia Miller, who conducted the pay equity study for the state of Ohio. The forum is at 1:00 pm, Saturday, Jan. 10th, in the basement of the Ann Arbor Public Library. Finally, we invite everyone to come to the City Council meeting when the resolution is presented. We need your support to ensure that Ann Arbor follows the best practices of other progressive communities, and sets an example for the private sector. Gregory Scott is Volunteer Coördinator for the Ann Arbor City Democratie Party and Co-Chair of Ann Arbor DSA.