Right To Food Yet To Be Fully Realized In U.s. 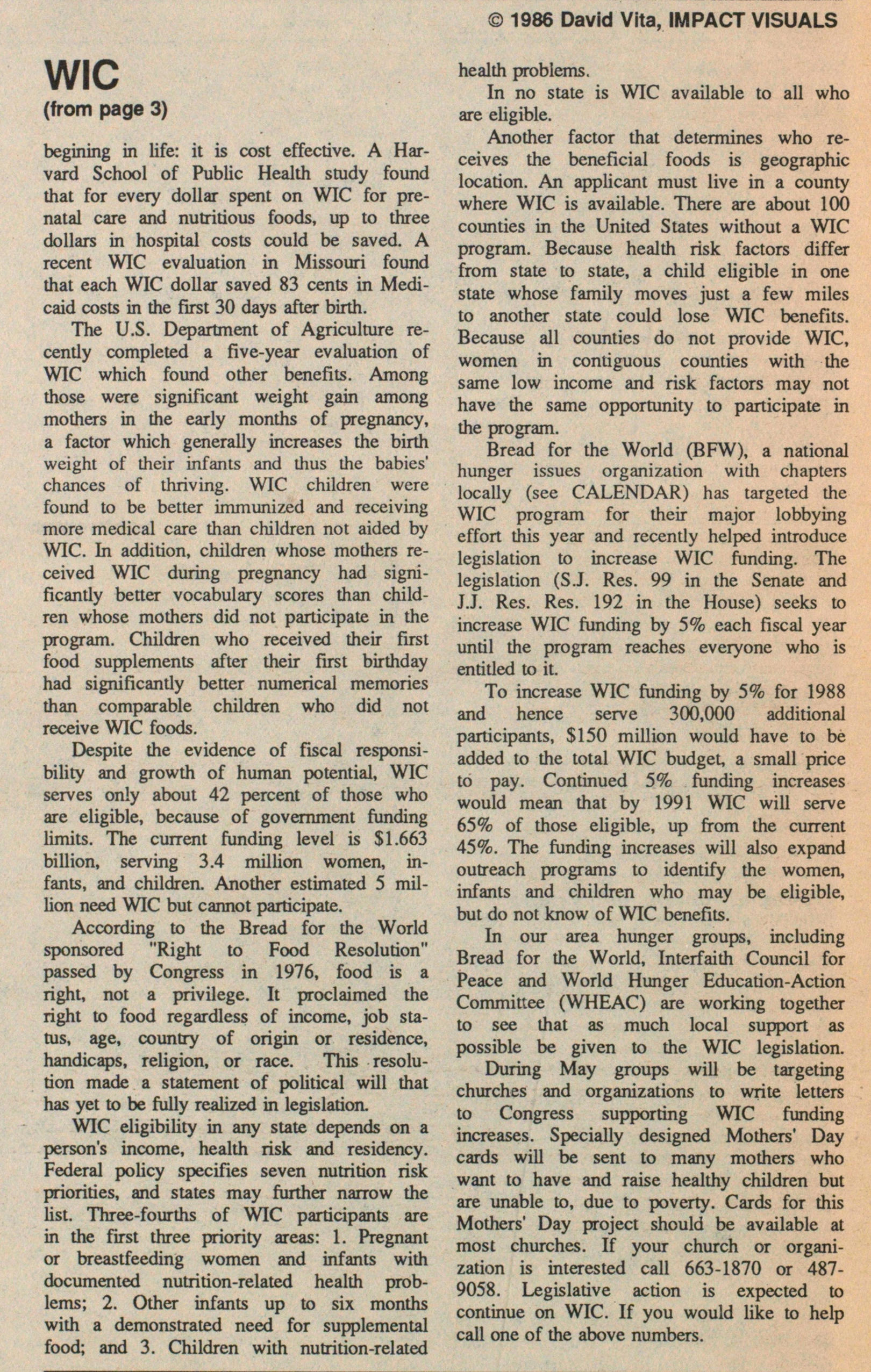 Despite a Gross National Product of more than $14,000 per person, 13 million children live in poverty in the U. S. Of the eleven states in the nation with the highest infant mortality rates, ten are in the South. The Black infant mortality rate is almost twice as high as that for whites. ín Washington, D.C., the infant mortality rate is twice the national average and in 1981 exceeded that of Cuba and Jamaica. The United States ranks 15th in infant mortality among nations. While adequate diet will not compénsate for great differences in access to opportunity, it is a start. The Special Supplemental Food Program for Women, Infants and Children (W1C) is an exceptionally successful program designed to improve the health of low-income women, new mothers, infants and pre-school children at nutritional risk. WIC helps prevent malnutrition by providing a medically prescribed package of iron-fortified infant formula, cheese, milk, fruit juice, cereal and other foods based on the individuáis need. The average cost of a month's WIC is $30.50. Medical attention and food is supplemented with nutrition education for parents. WIC not only assures children a healthy (see WIC, page 8) WIC (from page 3) begining in life: it is cost effective. A Harvard School of Public Health study found that for every dollar spent on WIC for prenatal care and nutritious foods, up to three dollars in hospital costs could be saved. A recent WIC evaluation in Missouri found that each WIC dollar saved 83 cents in Medicaid costs in the first 30 days after birth. The U.S. Department of Agriculture recently completed a fíve-year evaluation of WIC which found other benefits. Among those were significant weight gain among mothers in the early months of pregnancy, a factor which generally increases the birth weight of their infants and thus the babies' chances of thriving. WIC children were found to be better immunized and receiving more medical care than children not aided by WIC. In addition, children whose mothers received WIC during pregnancy had significantly better vocabulary scores than children whose mothers did not particípate in the program. Children who received their first food supplements after their first birthday had significantly better numerical memories than comparable children who did not receive WIC foods. Despite the evidence of fiscal responsibility and growth of human potential, WIC serves only about 42 percent of those who are eligible, because of government funding limits. The current funding level is $1.663 billion, serving 3.4 mi Ilion women, infants, and children. Another estimated 5 million need WIC but cannot participate. According to the Bread for the World sponsored "Right to Food Resolution" passed by Congress in 1976, food is a right, not a privilege. It proclaimed the right to food regardless of income, job status, age, country of origin or residence, handicaps, religión, or race. This resolution made a statement of political will that has yet to be fully reaüzed in legislation. WIC eligibility in any state depends on a person's income, health risk and residency. Federal policy specifies seven nutrition risk priorities, and states may further narrow the hst. Three-fourths of WIC participants are in the first three priority areas: 1. Pregnant or breastfeeding women and infants with documented nutrition-related health problems; 2. Other infants up to six months with a demonstrated need for supplemental food; and 3. Children with nutrition-related health problems. In no state is WIC available to all who are eligible. Another factor that determines who receives the benefïcial foods is geographic location. An applicant must live in a county where WIC is available. There are about 100 counties in the United States without a WIC program. Because health risk factors differ from state to state, a child eligible in one state whose family moves just a few miles to another state could lose WIC benefits. Because all counties do not provide WIC, women in contiguous counties with the same low income and risk factors may not have the same opportunity to participate in the program. Bread for the World (BFW), a national hunger issues organization with chapters locally (see CALENDAR) has targeted the WIC program for their major lobbying effort this year and recently helped introduce legislation to increase WIC funding. The legislation (S.J. Res. 99 in the Senate and J.J. Res. Res. 192 in the House) seeks to increase WIC funding by 5% each fiscal year until the program reaches everyone who is entitled to it. To increase WIC funding by 5% for 1988 and henee serve 300,000 additional participants, $150 million would have to be added to the total WIC budget, a small price to pay. Continued 5% funding increases would mean that by 1991 WIC will serve 65% of those eligible, up from the current 45%. The funding increases will also expand outreach programs to identify the women, infants and children who may be eligible, but do not know of WIC benefits. In our area hunger groups, including Bread for the World, Interfaith Council for Peace and World Hunger Education-Action Committee (WHEAC) are working together to see that as much local support as possible be given to the WIC legislation. During May groups will be targeting churches and organizations to write letters to Congress supporting WIC funding increases. Specially designed Mothers' Day cards will be sent to many mothers who want to have and raise healthy children but are unable to, due to poverty. Cards for this Mothers' Day project should be available at most churches. If your church or organization is interested cali 663-1870 or 4879058. Legislative action is expected to continue on WIC. If you would like to help cali one of the above numbers.