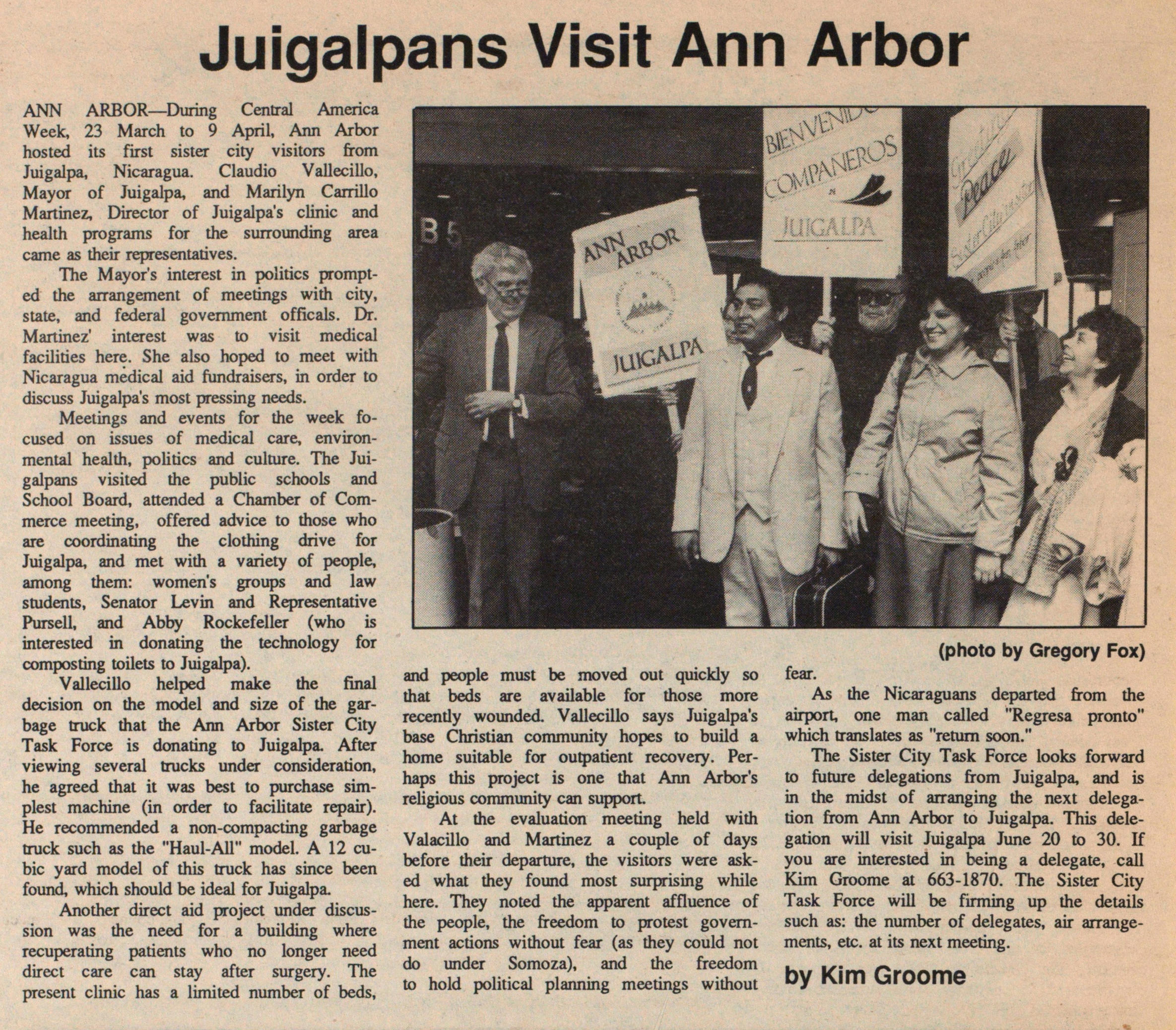 ANN ARBOR- During Central America Week, 23 March to 9 April, Ann Arbor hosted its first sister city visitors Erom Juigalpa, Nicaragua. Claudio Vallecillo, Mayor of Juigalpa, and Marilyn Carrillo Martínez, Director of Juigalpa's clinic and health programs for the surrounding area came as their repTesentatives. The Mayor's interest in politics prompted the arrangement of meetings with city, state, and federal government officals. Dr. Martinez' interest was to visit medical facilities here. She also hoped to meet with Nicaragua medical aid fundraisers, in order to discuss Juigalpa's most pressing needs. Meetings and events for the week focused on issues of medical care, environmental health, politics and culture. The Juigalpans visited the public schools and School Board, attended a Chamber of Commerce meeting, offered advice to those who are coordinating the clothing drive for Juigalpa, and met with a variety of people, among them: women's groups and law studente, Senator Levin and Representative Pursell, and Abby Rockefeller (who is interested in donating the technology for composting toilets to Juigalpa). Vallecillo helped make the final decisión on the model and size of the garbage truck that the Ann Arbor Sister City Task Force is donating to Juigalpa. After viewing several trucks under consideration, he agreed that it was best to purchase simplest machine (in order to facilítate repair). He recommended a non-compacting garbage truck such as the "Haul-All" model. A 12 cubic yard model of this truck has since been found, which should be ideal for Juigalpa. Another direct aid project under discussion was the need for a building where recuperating patients who no longer need direct care can stay after surgery. The present clinic has a limited number of beds, and people must be moved out quickly so that beds are available for those more recently wounded. Vallecillo says Juigalpa's base Christian community hopes to build a home suitable for outpaticnt recovery. Perhaps this project is one that Ann Arbor's religious community can support. At the evaluation meeting held with Valacillo and Martinez a couple of days before their departure, the visitors were asked what they found most surprising while here. They noted the apparent affluence of the people, the freedom to protest govemment actions without fear (as they could not do under Somoza), and the freedom to hold political planning meetings without tear. As the Nicaraguans departed from the airport, one man called "Regresa pronto" which translates as "return soon." The Sister City Task Force looks forward to future delegations from Juigalpa, and is in the midst of arranging the next delegation from Ann Arbor to Juigalpa. This delegation will visit Juigalpa June 20 to 30. If you are interested in being a delégate, cali Kim Groóme at 663-1870. The Sister City Task Force will be firming up the details such as: the number of delegates, air arrangements, etc. at its next meeting.