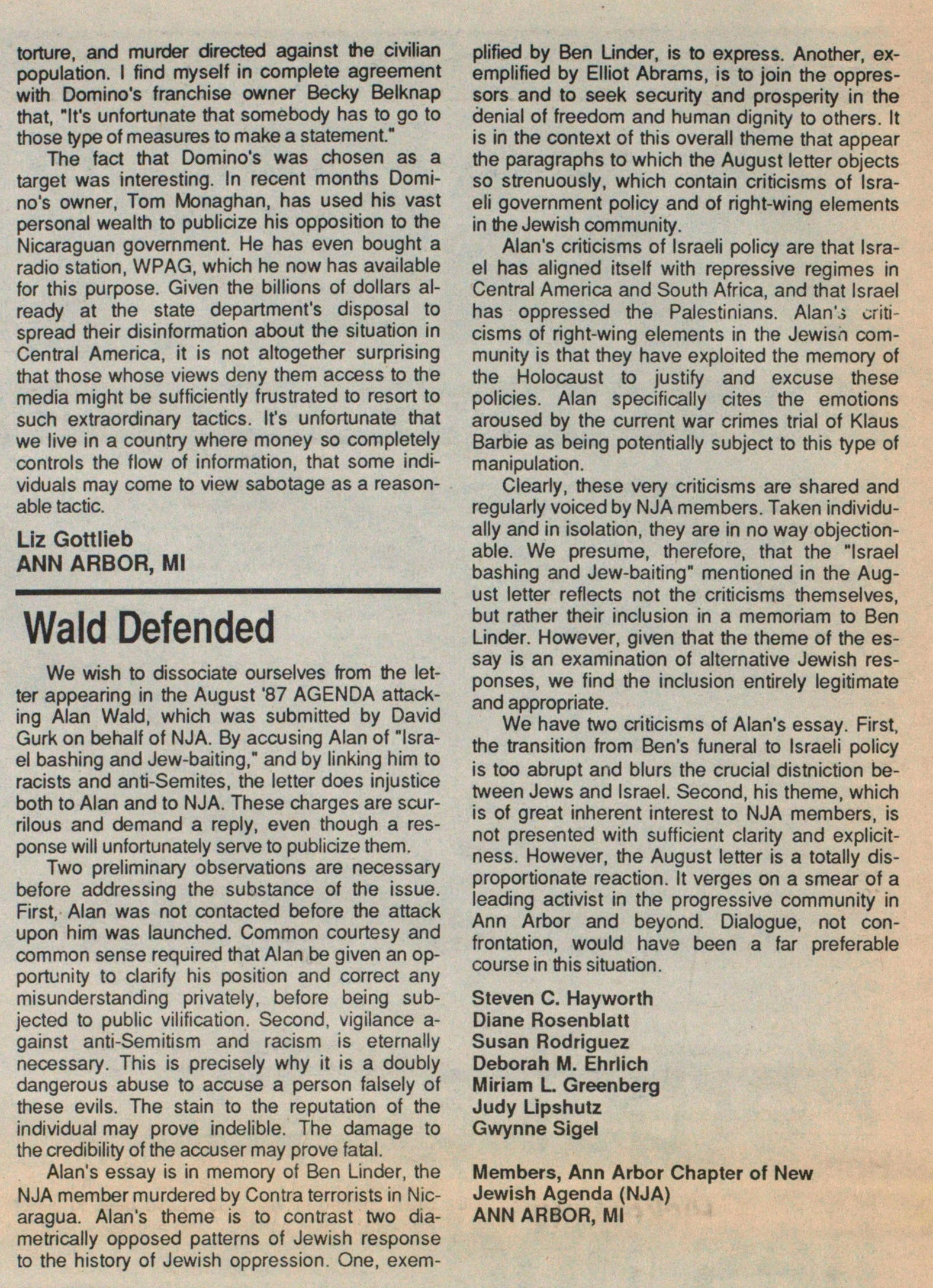 We wish to dissociate ourselves from the letter appearing n the August '87 AGENDA attacking Alan Wald, which was submitted by David Gurk on behalf of NJA. By accusing Alan of "Israel bashing and Jew-baiting," and by linking him to racists and anti-Semites, the letter does njustice both to Alan and to NJA. These charges are scurrilous and demand a reply, even though a response will unfortunately serve to publicize them. Two preliminary observations are necessary before addressing the substance of the issue. First, Alan was not contacted before the attack upon him was launched. Common courtesy and common sense required that Alan be given an opportunity to clarify his position and correct any misunderstanding privately, before being subjected to public vilification. Second, vigilance against anti-Semitism and racism is eternally necessary. This is precisely why it is a doubly dangerous abuse to accuse a person falsely of these evils. The stain to the reputation of the individual may prove indelible. The damage to the credibility of the accuser may prove fatal. Alan's essay is in memory of Ben Linder, the NJA member murdered by Contra terrorists in Nicaragua. Alan's theme is to contrast two diametrically opposed patterns of Jewish response to the history of Jewish oppression. One, plified by Ben Linder, s to express. Another, exemplified by Elliot Abrams, s to join the oppressors and to seek security and prosperity n the denial of freedom and human dignity to others. It is in the context of this overall theme that appear the paragraphs to which the August letter objects so strenuously, which contain criticisms of Israeli government policy and of right-wing elements in the Jewish community. Alan's criticisms of Israeli policy are that Israel has aligned itself with repressive regimes in Central America and South África, and that Israel has oppressed the Palestinians. Alan'.s criticisms of right-wing elements in the Jewisn community is that they have exploited the memory of the Holocaust to justify and excuse these policies. Alan specifically cites the emotions aroused by the current war crimes trial of Klaus Barbie as being potentially subject to this type of manipulation. Clearly, these very criticisms are shared and regularly voiced by NJA members. Taken individually and in solation, they are in no way objectionable. We presume, therefore, that the "Israel bashing and Jew-baiting" mentioned in the August letter reflects not the criticisms themselves, but rather their inclusión in a memoriam to Ben Linder. However, given that the theme of the essay is an examination of alternative Jewish responses, we find the inclusión entirely legitímate and appropriate. We have two criticisms of Alan's essay. First, the transition from Ben's funeral to Israeli policy is too abrupt and blurs the crucial distniction between Jews and Israel. Second, his theme, which is of great inherent interest to NJA members, is not presented with sufficient clarity and explicitness. However, the August letter is a totally disproportionate reaction. It verges on a smear of a leading activist in the progressive community in Ann Arbor and beyond. Dialogue, not confrontation, would have been a far preferable course in this situation. Members, Ann Arbor Chapter of New Jewish Agenda (NJA) ANN ARBOR, Ml