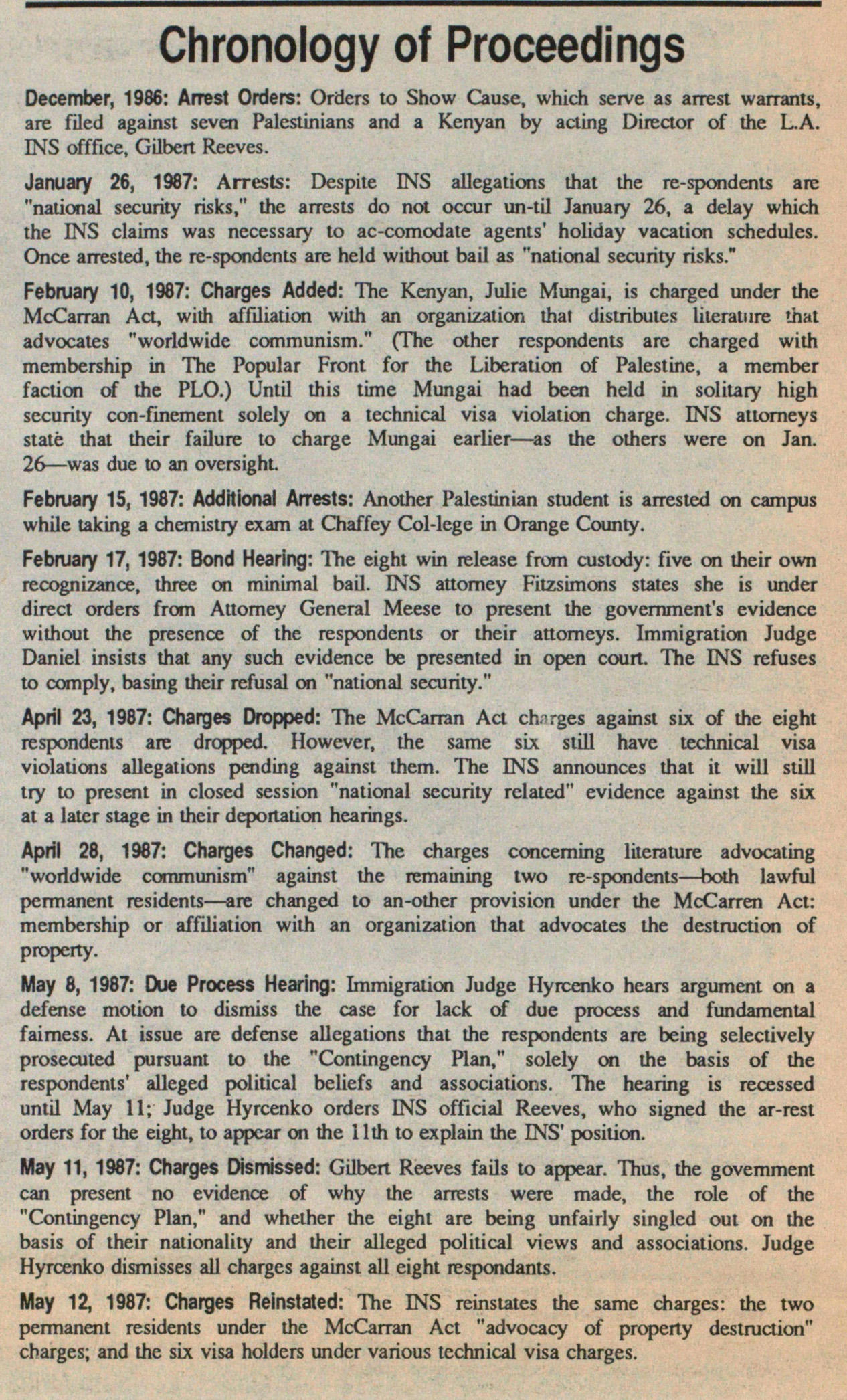 December, 1986: Arrest Orders: Orders to Show Cause, which serve as arrest warrants, are filed against seven Palestinians and a Kenyan by acling Director of the L.A. INS offfice, GQbert Reeves. January 26, 1987: Arrests: Despite INS allegations that the re-spondents are "national security risks," the arrests do not occur un-til January 26, a delay which the INS claims was necessary to ac-comodate agents' holiday vacation schedules. Once arrested, the re-spondents are held without bail as "national security risks." February 10, 1987: Charges Added: The Kenyan, Julie Mungai, is charged under the McCarran Act, with affdiation with an organization ihat distributes literature that advocates "worldwide communism." (The other rcspondcnts are charged with membership in The Popular Front for the Liberation of Palestine, a member faction of the PLO.) Üntil this time Mungai had been held in solitary high security con-finement solely on a technical visa violation charge. INS attorneys state that their failure to charge Mungai earlier - as the others were on Jan. 26- was due to an oversight. February 15, 1987: Addhional Arrests: Another Palestinian student is arrested on campus whüe taking a chemistry exam at Chaffey Col-lege in Orange County. February 17, 1987: Bond Hearing: The eight win release from custody: five on their own recognizance, three on minimal bail. INS attomey Fitzsimons states she is under direct orders from Attomey General Meese to present the govemment's evidence without the presence of the respondents or their attomeys. Immigration Judge Daniel insists that any such evidence be presented in open court. The INS refuses to comply, basing their refusal on "national security." April 23, 1987: Charges Dropped: The McCarran Act ch.irges against six of the eight respondents are dropped. However, the same six still have technical visa violations allegations pending against them. The INS announces that it will still try to present in closed session "national security related" evidence against the six at a later stage in their depoitation hearings. April 28, 1987: Charges Changed: The charges concerning liierature advocating "worldwide communism" against the remaining two re-spondenls - both lawful permanent residents - are changed to an-other provisión under the McCarren Act: membership or affdiation with an organization that advocates the destruction of property. May 8, 1987: Due Process Hearing: Immigration Judge Hyrcenko hears argument on a defense motion to dismiss the case for lack of due process and fundamental fairness. At issue are defense allegations that the respondents are being selectively prosecuted pursuant to the "Contingency Plan," solely on the basis of the respondents' alleged politica! beliefs and associations. The hearing is recessed until May 11; Judge Hyrcenko orders INS official Reeves, who signed the ar-rest orders for the eight, to appcar on the 1 lth to explain the INS' posilion. May 11, 1987: Charges Dismissed: Gilbert Reeves fails to appear. Thus, the govemment can present no evidence of why the arrests were made, the role of the "Contingency Plan," and whether the eight are being unfairly singled out on the basis of their nationality and their alleged polilical views and associations. Judge Hyrcenko dismisses all charges against all eight respondants. May 12, 1987: Charges Reinstated: The INS reinstales the same charges: the two permanent residents under the McCarran Act "advocacy of property destruction" charges; and the six visa holders under various technical visa charges.