Say What You Will... Good And Evil Won't Be Defined Here 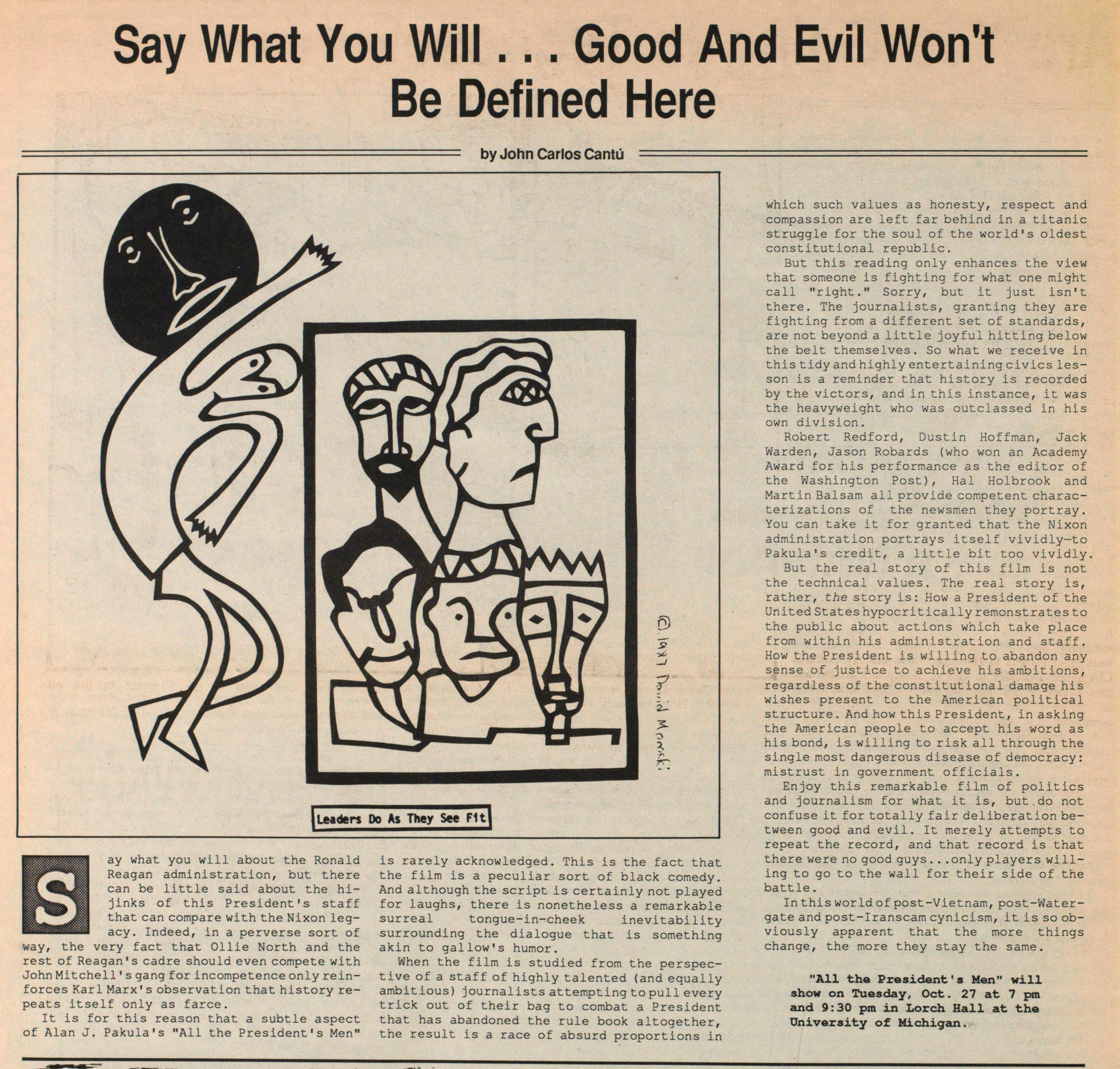 ay what you will about the Ronald MrnH Reagan administration, but there ï A can De üttle said about the hi09 jinks of this President's staff s that can compare with the Nixon legBHIIi'iiIbsbI acy. Indeed, in a perverse sort of way, the very fact that Ollie North and the rest of Reagan 's cadre should even compete with John Mitchell ' s gang f or incompetence only reinf orces Kar 1 Marx ' s observation that history repeats itself only as farce. It is for this reason that a subtle aspect of Alan J. Pakula's "All the President's Men" is rarely acknowledged. Thls is the f act that the film is a peculiar sort of black comedy. And although the script is certainly not played for laughs, there is nonetheless a remarkable surreal tongue-in-cheek inevitability surrounding the dialogue that is something akin to gallow's humor. When the film is studied from the perspective of a staff of highly talented (and equally ambitious) journalists attempting topull every trick out of their bag to combat a President that has abandoned the rule book altogether, the result is a race of absurd proportions in which such values as honesty, respect and compassion are left far behind in a titanic struggle for the soul of the world's oldest constitutlonal republic. But this reading only enhances the view that someone is fighting for what one might cali "right." Sorry, but it just isn't there. The journalists, granting they are fighting from a different set of standards, are not beyond a little joyful hitting below the belt themselves . So what we receive in this tidy and highly entert ainingcivicslesson is a reminder that history is recorded by the victors, and in this instance, it was the heavyweight who was outclassed in his own división. Robert Redford, Dustin Hoffman, Jack Warden, Jason Robards (who won an Academy Award for his performance as the editor of the Washington Post) , Hal Holbrook and Martin Balsam all provide competent characterizations of the newsmen they portray. You can take it for granted that the Nixon administration portrays itself vividly-to Pakula's credit, a little bit too vividly. But the real story of this film is not the technical values. The real story is, rather, the story is: How a President of the United States hypocritically remonstrates to the public about actions which take place from within his administration and staf f. How the President is willing to abandon any sense of justice to achieve his ambitions, regardless of the constitutional damage his wishes present to the American political structure. And how this President, in asking the American people to accept his word as his bond, is willing to risk all through the single most dangerous disease of democracy: mistrust in government officials. Enjoy this remarkable film of politics and journalism for what it is, but do not confuse it for totally fair deliberation between good and evil. It merely attempts to repeat the record, and that record is that there were no good guys . . .only players willing to go to the wall for their side of the battle. In this world of post-Vietnam, post-Watergate and post-Iranscam cynicism, it is so obviously apparent that the more things change, the more they stay the same. "All the President' s Men" will show on Tuesday, Oct. 27 at 7 pm and 9:30 pm in Lorch Hall at the Dniversity of Michigan.