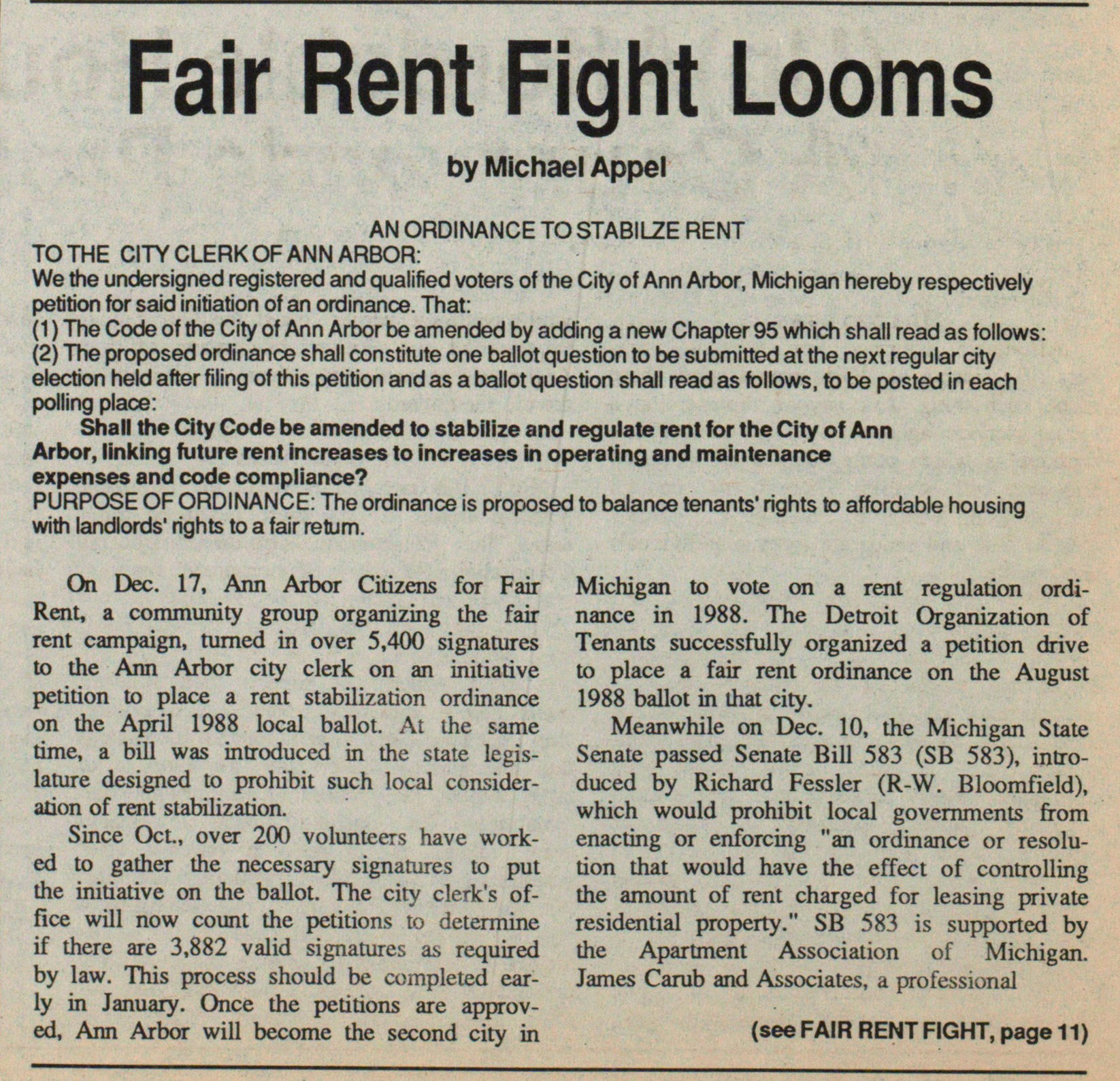 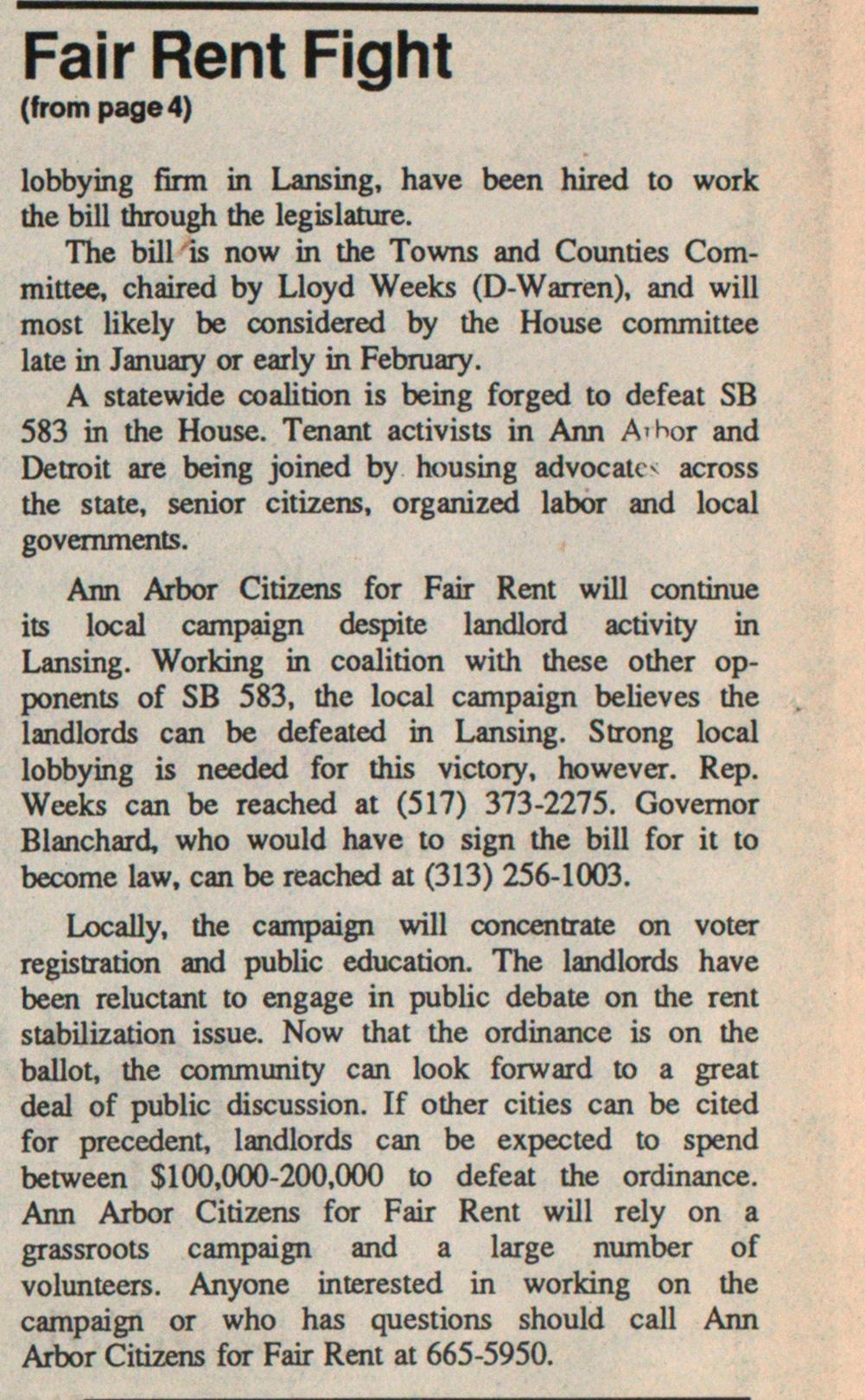 AN ORDINANCE TO STABILZE RENT TOTHE CITYCLERKOFANNARBOR: We the undersigned registered and qualified voters of the City of Ann Arbor, Michigan hereby respectively petition for said initiation of an ordinance. That: (1 ) The Code of the City of Ann Arbor be amended by adding a new Chapter 95 which shall read as follows: (2) The proposed ordinance shall constitute one ballot question to be submitted at the next regular city election held after filing of this petition and as a ballot question shall read as follows, to be posted in each poll ing place: Shall the City Code be amended to sta bilize and regúlate rent for the City of Ann Arbor, linking future rent increases to increases in operating and maintenance expenses and code compliance? PURPOSE OF ORDINANCE: The ordinance is proposed to balance tenants' rights to affordable housing with landlords' rights to a fair return . On Dec. 17, Ann Arbor Citizens for Fair Rent, a community group organizing the fair rent campaign, tumed in over 5,400 signatures to the Am Arbor city clerk on an initiative petition to place a rent stabilization ordinance on the April 1988 local ballot. At the same time, a bilí was introduced in the state legislature designed to prohibit such local consideration of rent stabilization. Since Oct., over 200 volunteers have worked to gather the necessary signatures to put the initiative on the ballot. The city clerk's office will now count the petitions to determine if there are 3,882 valid signatures as required by law. This process should be completed early in January. Once the petitions are approved, Ann Arbor will become the second city in Michigan to vote on a rent regulation ordinance in 1988. The Detroit Organization of Tenant successfully organized a petition drive to place a fair rent ordinance on the August 1988 ballot in that city. Meanwhile on Dec. 10, the Michigan State Senate passed Senate Bill 583 (SB 583), introduced by Richard Fessier (R-W. Bloomfield), which would prohibit local governments from enacting or enforcing "an ordinance or resolution that would have the effect of controlling the amount of rent charged for leasing private residential property." SB 583 is supported by the Apartment Association of Michigan. James Carub and Associates, a professional (see FAIR RENT FIGHT, page 11) Fair Rent Fight (f rom page 4) lobbying firm in Lansing, have been hired to work the bill through the legislature. The bill is now in the Towns and Counties Committee, chaired by Lloyd Weeks (D-Warren), and will most likely be considered by the House committee late in January or early in February. A statewide coalition is being forged to defeat SB 583 in the House. Tenant activists in Ann A'K)r and Detroit are being joined by housing across the state, senior citizens, organized labor and local governments. Ann Arbor Citizens for Fair Rent will continue its local campaign despite landlord activity in Lansing. Working in coalition with these other opponents of SB 583, the local campaign believes the . landlords can be defeated in Lansing. Strong local lobbying is needed for this victory, however. Rep. Weeks can be reached at (517) 373-2275. Governor B lanchar d, who would have to sign the bill for it to become law, can be reached at (313) 256-1003. Locally, the campaign will concentrate on voter registration and public education. The landlords have been reluctant to engage in public debate on the rent stabilization issue. Now that the ordinance is on the ballot, the community can look forward to a great deal of public discussion. If other cities can be cited for precedent, landlords can be expected to spend between $100,000-200,000 to defeat the ordinance. Ann Arbor Citizens for Fair Rent will rely on a grassroots campaign and a large number of volunteers. Anyone interested in working on the campaign or who has questions should cali Ann Arbor Citizens for Fair Rent at 665-5950.