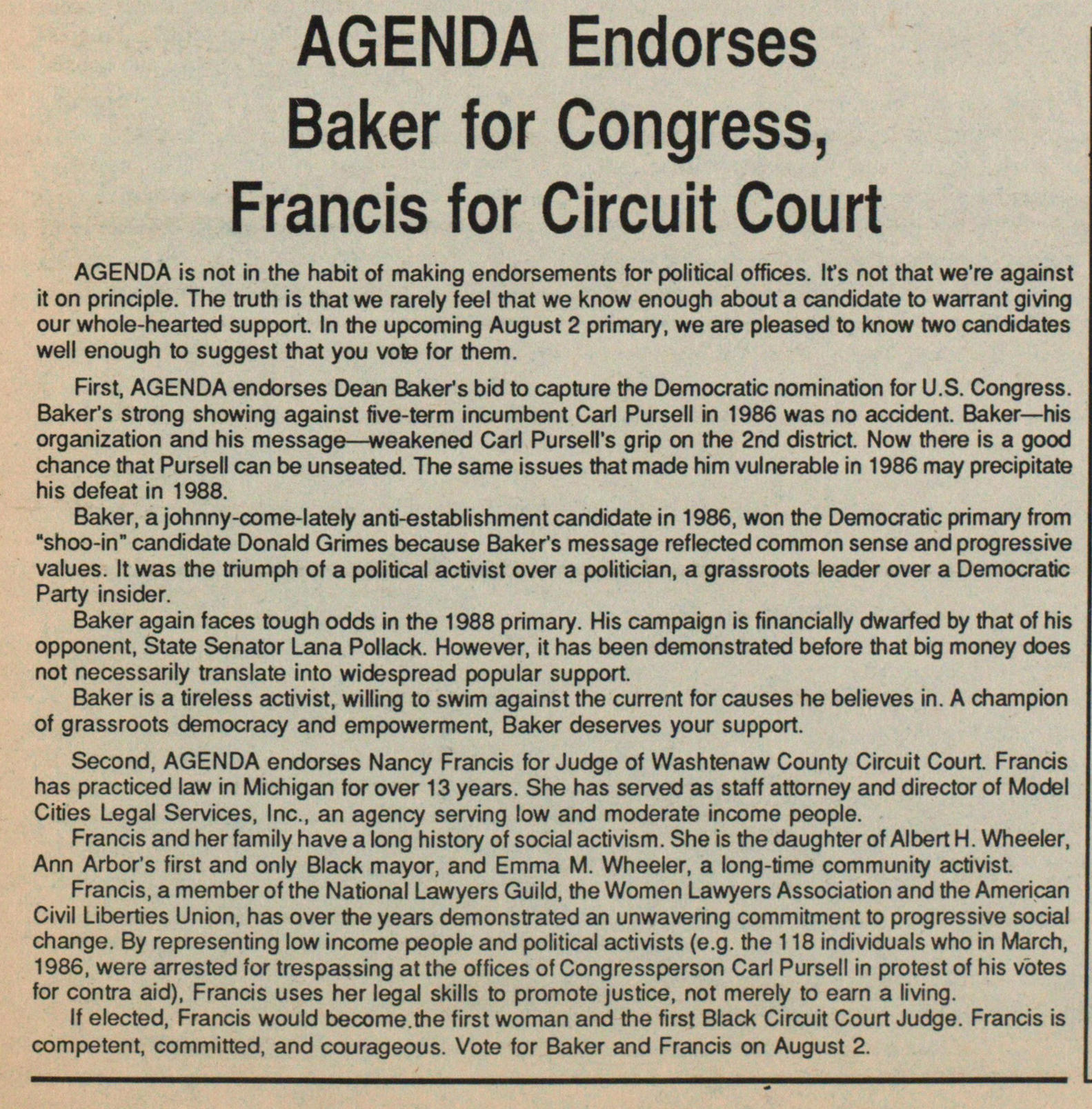 AGENDA is not in the habit of making endorsements for political offices. Ifs not that we're against it on principie. The truth is that we rarely Teel that we know enough about a candidate to warrant giving our whole-hearted support. In the upcoming August 2 primary, we are pleased to know two candidates well enough to suggest that you vote for them. First, AGENDA endorses Dean Baker' s bid to capture the Democratie nomination for U.S. Congress. Baker's strong showing against five-term incumbent Cari Pursell in 1986 was no accident. Baker- his organization and his message - weakened Cari Pursell's grip on the 2nd district. Now there is a good chance that Pursell can be unseated. The same issues that made him vulnerable in 1986 may precipítate his defeat in 1988. Baker, a johnny-come-lately anti-establishrnent candidate in 1 986, won the Democratie primary from "shoo-in" candidate Donald Grimes because Baker's message reflected common sense and progressive values. It was the triumph of a political activist over a politician, a grassroots leader over a Democratie Party insider. Baker again faces tough odds in the 1988 primary. His campaign is financially dwarfed by that of his opponent, State Senator Lana Pollack. However, it has been demonstrated before that big money does not necessarily translate into widespread popular support. Baker is a tireless activist, willing to swim against the curre nt for causes he believes in. A champion of grassroots democracy and empowerment, Baker deserves your support. Second, AGENDA endorses Nancy Francis for Judge of Washtenaw County Circuit Court. Francis has practiced law in Michigan for over 13 years. She has served as staff attorney and director of Model Cities Legal Services, Inc., an agency serving low and moderate ncome people. Francis and her family have a long history of social activism. She is the daughterof Albert H. Wheeler, Ann Arbor's first and only Black mayor, and Emma M. Wheeler, a long-time community activist. Francis, a member of the National Lawyers Guild, the Women Lawyers Association and the American Civil Liberties Union, has over the years demonstrated an unwavering commitment to progressive social change. By representing low income people and political activists (e.g. the 1 18 individuals who in March, 1986, were arrested for trespassing at the offices of Congressperson Cari Pursell in protest of his vötes for contra aid), Francis uses her legal skills to promote justice, not merely to earn a living. If elected, Francis would become.the first woman and the first Black Circuit Court Judge. Francis is competent, committed, and courageous. Vote for Baker and Francis on August 2.