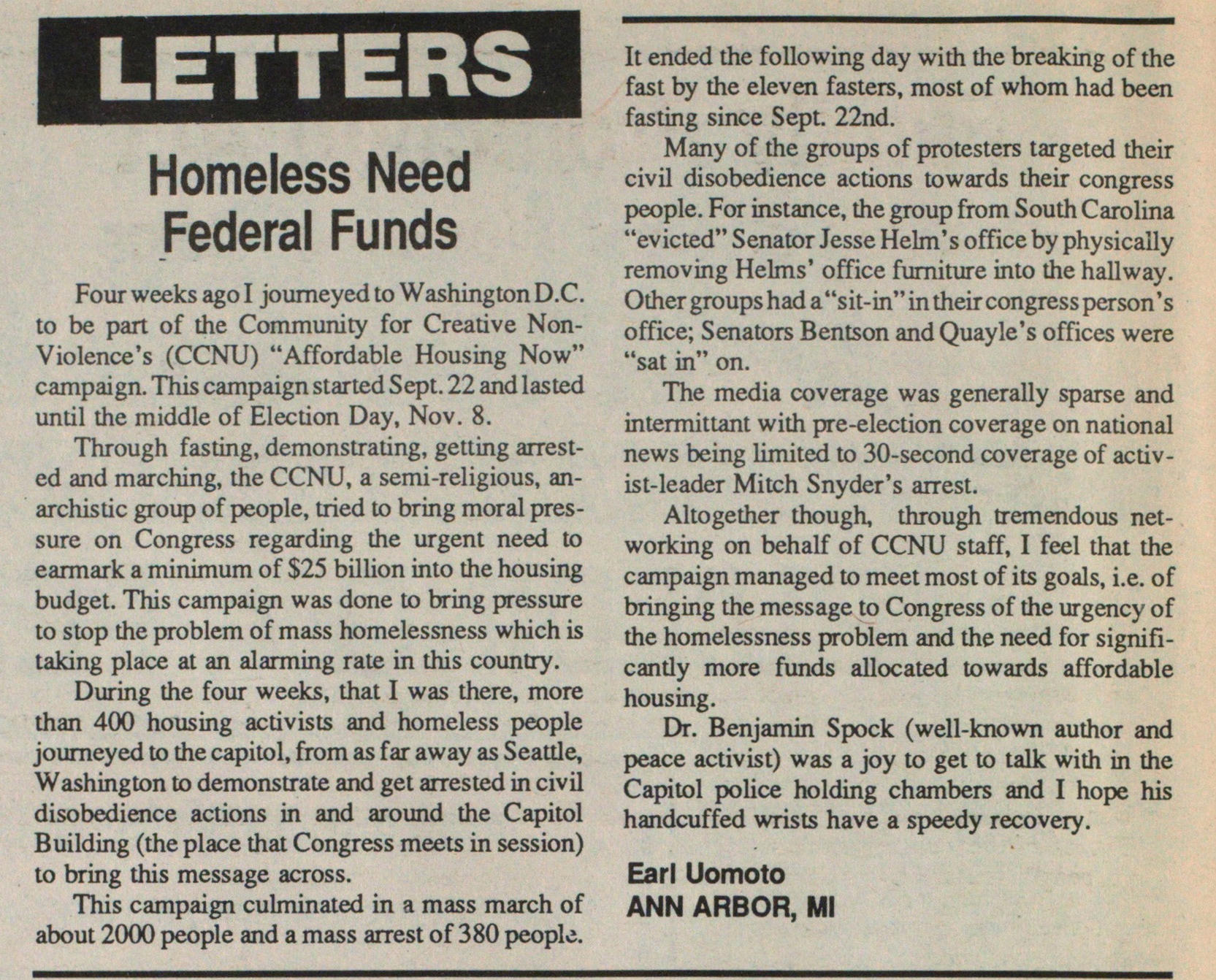 Four weeks ago I joumeyed to Washington D.C. to be part of the Community for Creative NonViolence's (CCNU) "Affordable Housing Now" campaign. This campaign started Sept. 22 and lasted until the middle of Election Day, Nov. 8. Through fasting, demonstrating, getting arrested and marching, the CCNU, a semi-religious, anarchistic group of people, tried to bring moral pressure on Congress regarding the urgent need to earmark a minimum of $25 billion into the housing budget. This campaign was done to bring pressure to stop the problem of mass homelessness which is taking place at an alarming rate in this country. During the four weeks, that I was there, more than 400 housing activists and homeless people joumeyed to the capítol, from as far away as Seattle, Washington to demónstrate and get arrested in civil disobedience actions in and around the Capitol Building (the place that Congress meets in session) to bring this message across. This campaign culminated in a mass march of about 2000 people and a mass arrest of 380 people. It ended the following day with the breaking of the fast by the eleven fasters, most of whom had been fasting since Sept. 22nd. Many of the groups of pretesters targeted their civil disobedience actions towards their congress people. For instance, the group from South Carolina "evicted" Senator Jesse Helm' s office by physically removing Helms' office furniture into the hallway. Other groups had a"sit-in" in their congress person's office; Senators Bentson and Quayle's offices were "sat in" on. The media coverage was generally sparse and intermittant with pre-election coverage on national news being limited to 30-second coverage of activist-leader Mitch Snyder's arrest. Altogether though, through tremendous networking on behalf of CCNU staff, I feel that the campaign managed to meet most of its goals, i.e. of bringing the message to Congress of the urgency of the homelessness problem and the need for signifïcantly more funds allocated towards affordable housing. Dr. Benjamin Spock (well-known author and peace activist) was a joy to get to talk with in the Capitol pólice holding chambers and I hope his handcuffed wrists have a speedy recovery.