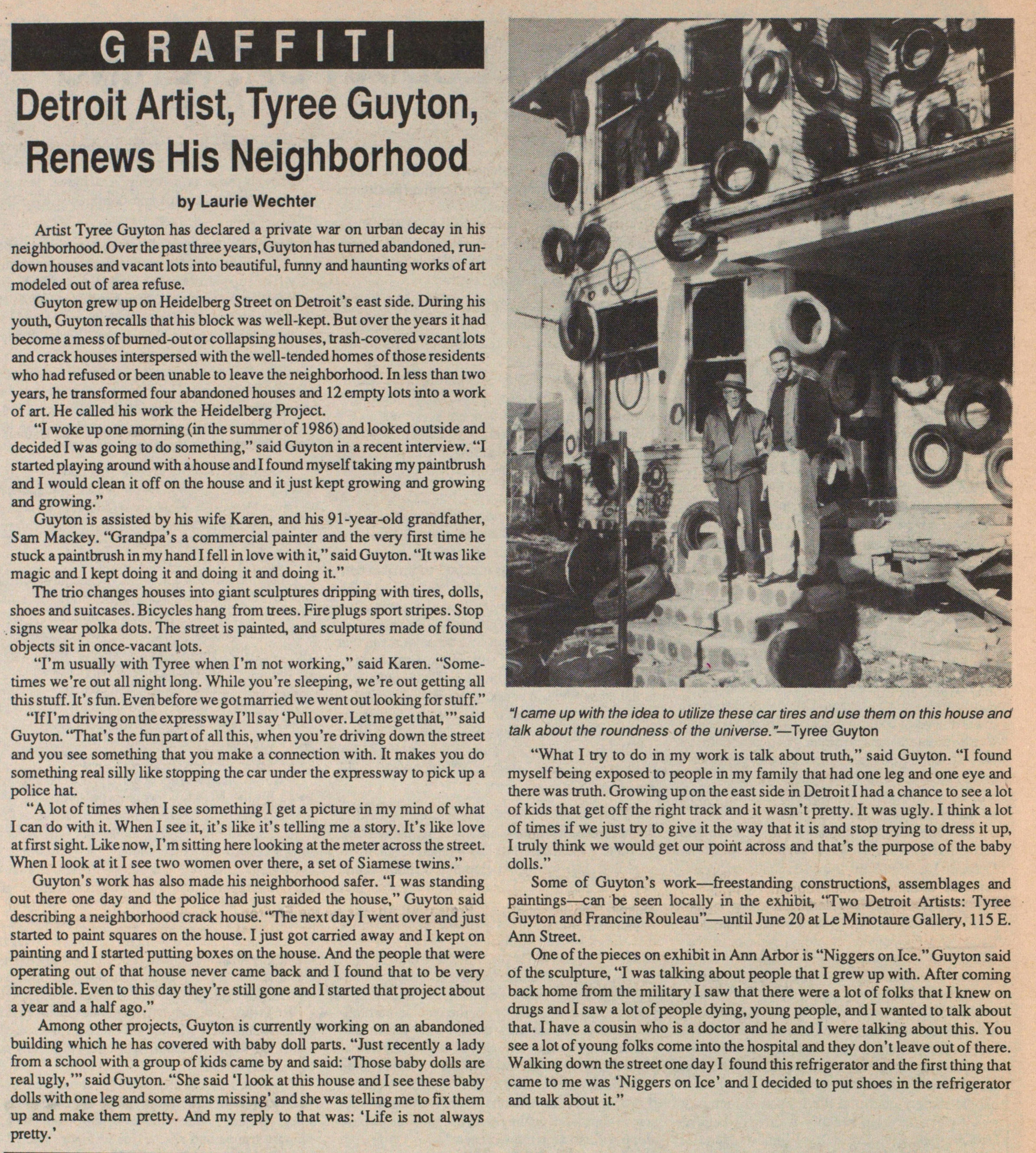 Artist Tyree Guyton has declared a private war on urban decay in nis neighborhood. Over the past three years, Guyton has turned abandoned, rundown houses and vacant lots into beautiful, funny and haunting works of art modeled out of area refuse. Guyton grew up on Heidelberg Street on Detroit's east side. During his youth, Guyton recalls that his block was well-kept. But over the years it had become a mess of bumed-out or coll apsing houses, trash-covered vacant lots and crack houses interspersed with the tended homes of those residen ts who had refused or been unable to leave the neighborhood. In less than two years, he transformed four abandoned houses and 12 empty lots into a work of art. He callcd his work the Heidelberg Project. "I woke upone morning (in the summerof 1986) and looked outside and decided I was going to do something," said Guyton in a recent interview. "I started playing around with a house and I found myself taking my paintbrush and I would clean it off on the house and it just kept growing and growing and growing." Guyton is assisted by his wife Karen, and his 91-year-old grandfather, Sam Mackey. "Grandpa's a commercial painter and the very first time he stuck apaintbrush in my hand I feil in love with it," said Guyton. "It was like magie and I kept doing it and doing it and doing it." The trio changes houses into giant sculptures dripping with tires, dolls, shoes and suitcases. Bicycles hang from trees. Fireplugs sport stripes. Stop signs wear polka dots. The street is painted, and sculptures made of found objects sit in once-vacant lots. "I'm usually with Tyree when I'm not working," said Karen. "Sometimes we're out all night long. While you're sleeping, we 're out getting all this stuff. It' s fun. Even before we got married we went out looking for stuff." "If I'mdriving on the expressway I'U say 'Pull over. Let meget that, '" said Guyton. "That's the fun part of all this, when you're driving down the street and you see something that you make a connection with. It makes you do something real silly like stopping the car under the expressway to piek up a pólice nat. "A lot of times when I see something I get a picture in my mind of what I can do with it. When I see it, it's like it's telling me a story. It's like love at first sight. Like now, I'm sitting here looking at the meter across the street. When I look at it I see two women over there, a set of Siamese twins." Guyton's work has also made his neighborhood safer. "I was standing out there one day and the pólice had just raided the house," Guyton said describing a neighborhood crack house. "The next day I went over and just started to paint squares on the house. I just got carried away and I kept on painting and I started putting boxes on the house. And the people that were operating out of that house never came back and I found that to be very incredible. Even to this day they're still gone and I started that project about a year and a half ago." Among other projects, Guyton is currently working on an abandoned building which he has covered with baby dolí parts. "Just recently a lady from a school with a group of kids came by and said: 'Those baby dolls are real ugly,'" said Guyton. "She said 'I look at this house and I see these baby dolls with one leg and some arms missing' and she was telling me to fix them up and make them pretty. And my reply to that was: 'Life is not always pretty.' "What I try to do in my work is talk about truth," said Guyton. "I found myself being exposed to people in my family that had one leg and one eye and there was truth. Growing up on the east side in Detroit I had a chance to see a lot of kids that get off the right track and it wasn't pretty. It was ugly. I think a lot of times if we just try to give it the way that it is and stop trying to dress it up, I truly think we would get our poiiit across and that's the purpose of the baby dolls." Some of Guyton's work - freestanding constructioná, assemblages and paintings - can be seen locally in the exhibit, 'Two Detroit Artists: Tyree Guyton and Francine Rouleau" - until June 20 at Le Minotaure Gallery, 1 15 E. Ann Street. One of the pieces on exhibit in Ann Arbor is "Niggers on Ice." Guyton said of the sculpture, "I was talking about people that I grew up with. After coming back home from the military I saw that there were a lot of folks that I knew on drugs and I saw a lot of people dying, young people, and I wanted to talk about that. I have a cousin who is a doctor and he and I were talking about this. You see a lot of young folks come into the hospital and they don't leave out of there. Walking do wn the street one day I found this refrigerator and the first thing that carne to me was 'Niggers on Ice' and I decided to put shoes in the refrigerator and talk about it." ioxoim