Why Bush "blew" The Coup 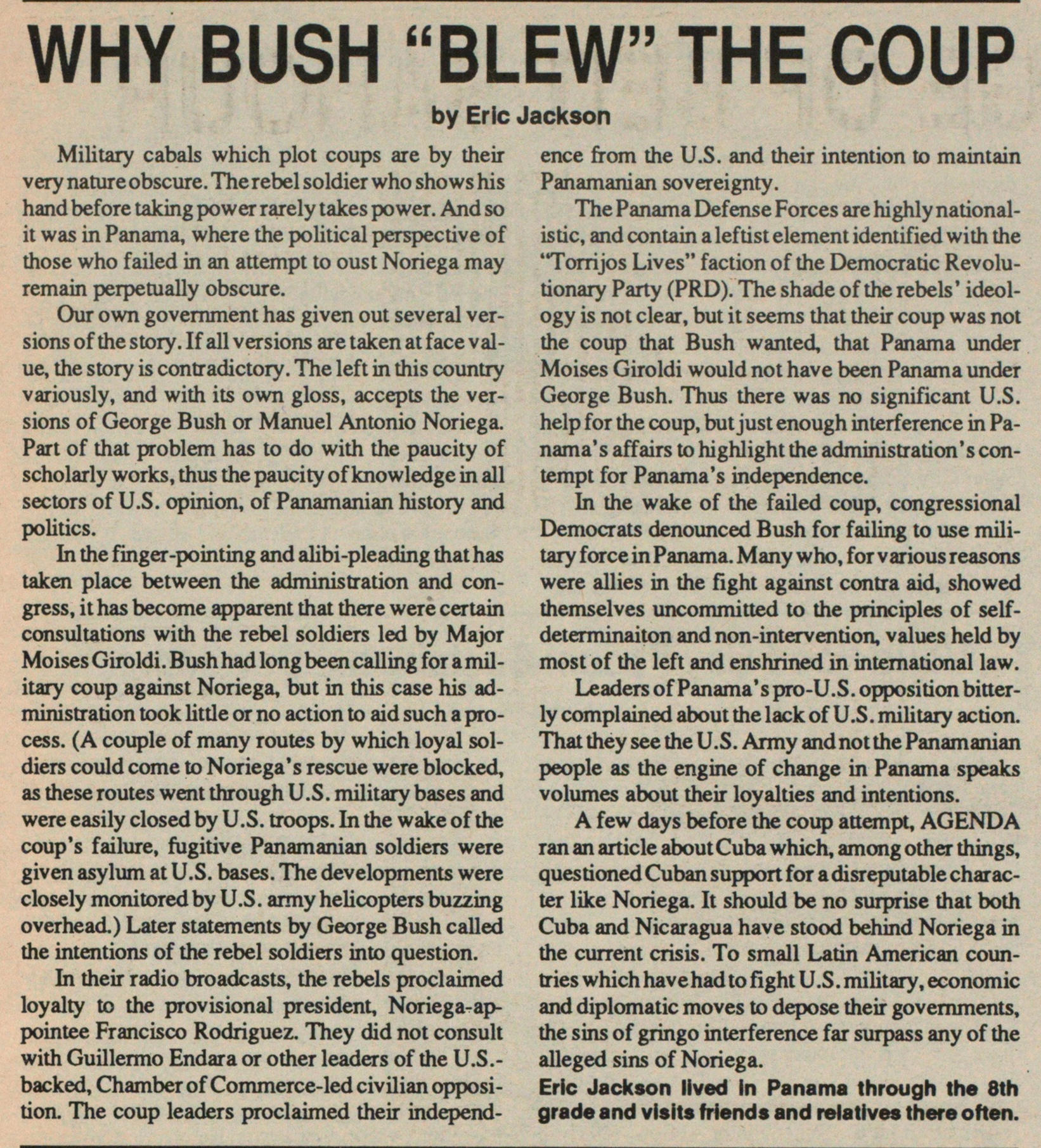 Military cabals which plot coups are by their very nature obscure. The rebel soldier who shows his hand bef ore taking power rarely takes power. And so it was in Panama, where the political perspective of those who failed in an attempt to oust Noriega may remain perpetually obscure. Our own government has given out several versions of the story. If all versions are taken at face value, the story is contradictory. The left in this country variously, and with its own gloss, accepts the versions of George Bush or Manuel Antonio Noriega. Part of that problem has to do with the paucity of scholarly works, thus the paucity of knowledge in all sectors of U.S. opinión, of Panamanian history and politics. In the finger-pointing and alibi -pleading that has taken place between the administration and congress, it has become apparent that there were certa in consultations with the rebel soldiers led by Major Moisés Giroldi. Bush had long been calling for a military coup against Noriega, but in this case his administration took little or no action to aid such a pro - cess. (A couple of many routes by which loyal soldiers could come to Noriega's rescue were blocked, as these routes went through U.S. military bases and were easily closed by U.S. troops. In the wake of the coup's failure, fugitive Panamanian soldiers were given asylum at U.S. bases. The developments were closely monitored by U.S . army helicopters buzzing overhead.) Later statements by George Bush called the intentions of the rebel soldiers into question. In their radio broadcasts, the rebels proclaimed loyalty to the provisional president, Noriega-appointee Francisco Rodríguez. They did not consult with Guillermo Endara or other leaders of the U.S.backed, Chamberof Commerce-led civilian opposition. The coup leaders proclaimed their ence from the U.S. and their intention to maintain Panamanian sovereignty. The Panama Defense Forces are highly nationalistic, and contain a lef tist element identif ied with the 'Torrijos Lives" faction of the Democratie Revolutionary Party (PRD). The shade of the rebels' ideology is not clear, but it seems that their coup was not the coup that Bush wanted, that Panama under Moisés Giroldi would not have been Panama under George Bush. Thus there was no significant U.S. help for the coup, but just enough interference in Panama's affairs to highlight the administration's contempt for Panama's independence. In the wake of the failed coup, congressional Democrats denounced Bush for failing to use military f orce in Panama. Many who, for various reasons were allies in the fight against contra aid, showed themselves uncommitted to the principies of selfdeterminaiton and non-intervention, values held by most of the left and enshhned in international law. Leaders of Panama's pro-U.S. opposition bitterly complained about the lack of U.S . military action. That they see the U.S. Army and not the Panamanian people as the engine of change in Panama speaks volumes about their loyalties and intentions. A few days before the coup attempt, AGENDA ran an article about Cuba which, among other things, ques tioned Cuban support for a disrepu table character like Noriega. It should be no surprise that both Cuba and Nicaragua have stood behind Noriega in the current crisis. To small Latin American countries which have had to fight U.S . military, economie and diplomatic moves to depose their governments, the sins of gringo interference f ar surpass any of the alleged sins of Noriega. Eric Jackson llved in Panama through the 8th grade and vlsits f riend s and rela tl ves there ofien.