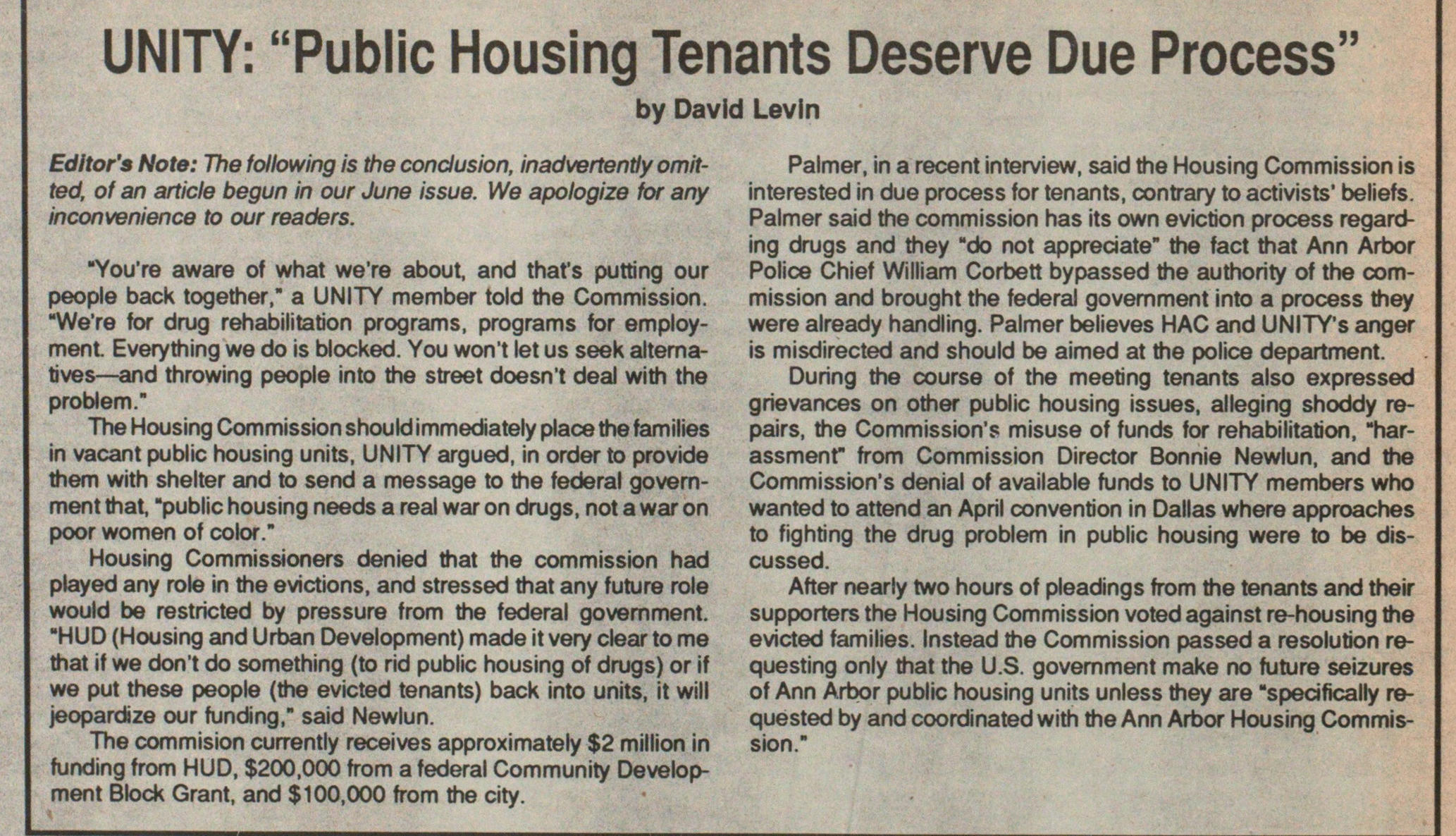 Editor's Note: The following is the conclusión, inadvertently omitted, of an añide begun in our June issue. We apologize for any inconvenience to our readers. "You're aware of what we're about, and that's putting our people back together," a UNITY member told the Commission. "We're for drug rehabilitation programs, programs for employment. Everything we do is blocked. You won't let us seek altematives - and throwing people into the street doesn't deal with the problem." The Housing Commission should immediately place the families in vacant public housing units, UNITY argued, in order to provide them with shelter and to send a message to the federal govemment that, "public housing needs a real war on drugs, not a war on poor wo men of color." Housing Commissioners denied that the commission had played any role in the evictions, and stressed that any future role would be resiricted by pressure from the federal govemment. "HUD (Housing and Urban Development) made it very clear to me that if we don't do something (to rid public housing of drugs) or if we put these people (the evicted tenants) back into units, it will jeopardize our funding," said Newlun. The commision currently receives approximately $2 million in funding from HUD, $200,000 from a federal Community Development Block Grant, and $100,000 from the city. Palmer, in a recent interview, said the Housing Commissíon is interested in due process for tenants, contrary to activists' beliefs Palmer said the commission has its own eviction process regarding drugs and they "do not appredate" the tact that Ann Arbor Pólice Chief William Corbett bypassed the authority of the commission and brought the federal govemment into a process they were already handling. Palmer believes HAC and UNlTY's anger is misdirected and should be aimed at the pólice department. During the course of the meeting tenants also expressed grievances on other public housing issues, alleging shoddy repairs, the Commission';: misuse of funds for rehabilitation, "harassmenr from Commission Director Bonnie Newlun, and the Commission's denial of available funds to UNITY members who wanted to attend an April convention in Dallas where approaches to fighting the drug problem in public housing were to be discussed. After nearly two hours of pleadings from the tenants and their supporters the Housing Commission voted against re-housing the evicted families. Instead the Commission passed a resolution requesting only that the U.S. govemment make no future seizures of Ann Arbor public housing units unless they are "specifically requested by and coordinated with the Ann Arbor Housing Commission."