The Abc's Of The Draft 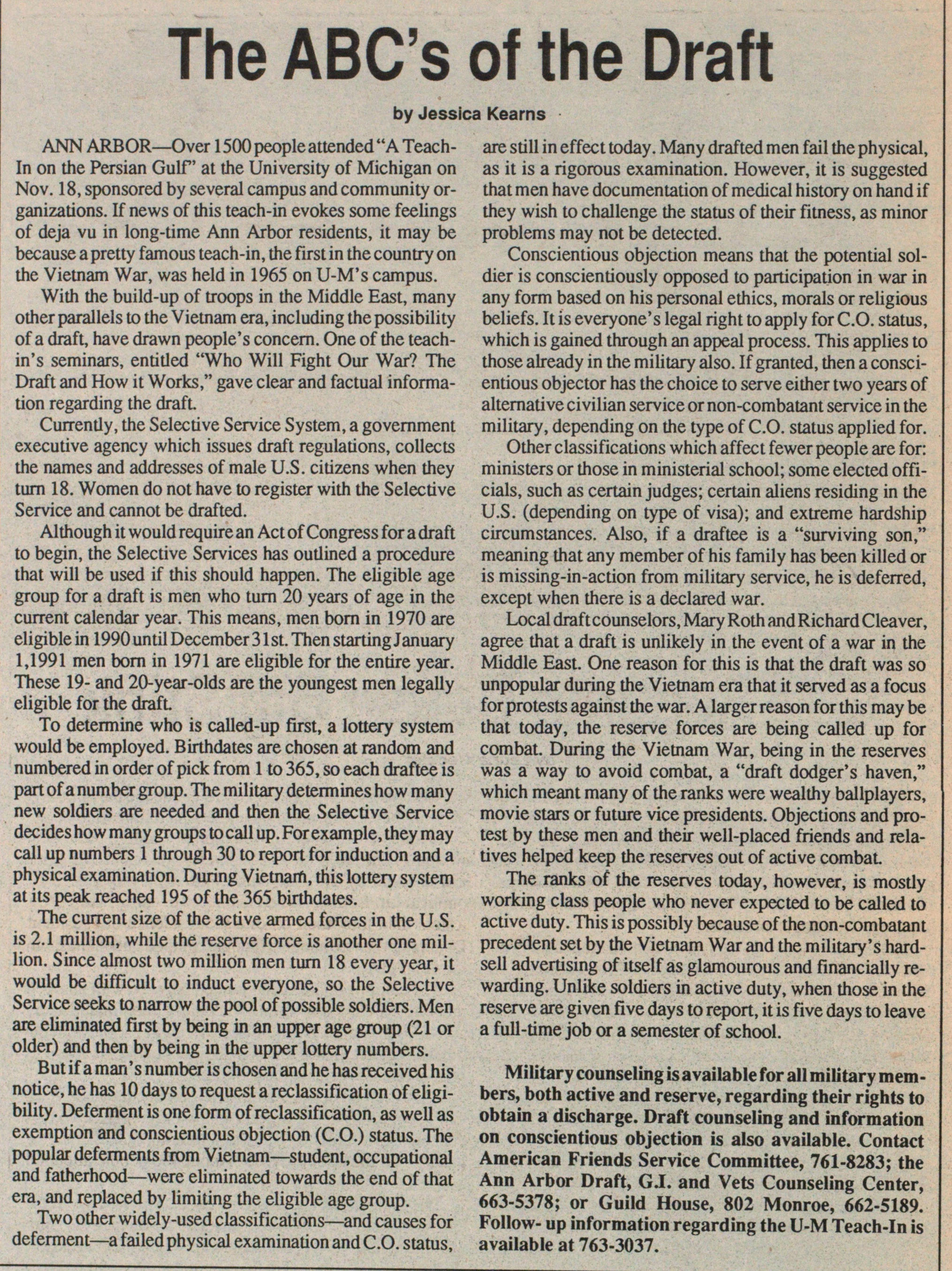 ANN ARBOR - Over 1 500 people attended "A TeachIn on the Persian Gulf' at the University of Michigan on Nov. 18, sponsored by several campus and community organizations. If news of this teach-in evokes some feelings of deja vu in long-time Ann Arbor residente, it may be because a pretty famous teach-in, the first in the country on the Vietnam War, was held in 1965 on U-M's campus. With the build-up of troops in the Middle East, many other parallels to the Vietnam era, including the possibility of a draft, have drawn people's concern. One of the teachin's seminars, entitled "Who Will Fight Our War? The Draft and How it Works," gave clear and factual information regarding the draft. Currently, the Selective Service System, a govemment executive agency which issues draft regulations, collects the names and addresses of male U.S. citizens when they turn 18. Women do not have to register with the Selective Service and cannot be drafted. Although it would require an Act of Congress for a draft to begin, the Selective Services has outlined a procedure that will be used if this should happen. The eligible age group for a draft is men who turn 20 years of age in the current calendar year. This means, men born in 1970 are eligible in 1990 until December 3 1 st. Then starting January 1,1991 men born in 1971 are eligible for the entire year. These and 20-year-olds are the youngest men legally eligible for the draft. To determine who is called-up first, a lottery system would be employed. Birthdates are chosen at random and numbered in order of piek from 1 to 365, so each draftee is part of a number group. The military determines how many new soldiers are needed and then the Selective Service decides how many groups to cali up. For example, they may cali up numbers 1 through 30 to report for induction and a physical examination. During Vietnam, this lottery system at its peak reached 195 of the 365 birthdates. The current size of the active armed forces in the U.S. is 2.1 million, while the reserve force is another one million. Since almost two million men turn 18 every year, it would be difficult to induct everyone, so the Selective Service seeks to narrow the pool of possible soldiers. Men are eliminated first by being in an upper age group (21 or older) and then by being in the upper lottery numbers. But if a man's number is chosen and he has received his notice, he has 10 days to request a reclassification of eligibility. Deferment is one form of reclassification, as well as exemption and conscientious objection (CO.) status. The popular deferments from Vietnam - student, occupational and fatherhood - were eliminated towards the end of that era, and replaced by limiting the eligible age group. Two other widely-used classifications - and causes for deferment - a failed physical examination and CO. status, are still in effect today . Many drafted men fail the physical, as it is a rigorous examination. However, it is suggested that men have documentation of medical history on hand if they wish to challenge the status of their fitness, as minor problems may not be detected. Conscientious objection means that the potential soldier is conscientiously opposed to participation in war in any form based on his personal ethics, moráis or religious beliefs. It is everyone's legal right to apply for C.O. status, which is gained through an appeal process. This applies to those already in the military also. If granted, then a conscientious objector has the choice to serve either two years of alternati ve civilian service or non-combatant service in the military, depending on the type of C.O. status applied for. Other classifications which affect fewer people are for: ministers or those in ministerial school; some elected officials, such as certain judges; certain aliens residing in the U.S. (depending on type of visa); and extreme hardship circumstances. Also, if a draftee is a "surviving son," meaning that any member of his family has been killed or is missing-in-action from military service, he is deferred, except when there is a declared war. Local draf t counselors, Mary Roth and Richard Cleaver, agree that a draft is unlikely in the event of a war in the Middle East. One reason for this is that the draft was so unpopular during the Vietnam era that it served as a focus for protests against the war. A larger reason for this may be that today, the reserve forces are being called up for combat. During the Vietnam War, being in the reserves was a way to avoid combat, a "draft dodger's haven," which meant many of the ranks were wealthy ballplayers, movie stars or future vice presidents. Objections and protest by these men and their well-placed friends and relatives helped keep the reserves out of active combat. The ranks of the reserves today, however, is mostly working class people who never expected to be called to active duty. This is possibly because of the non-combatant precedent set by the Vietnam War and the military's hardsell advertising of itself as glamourous and financially rewarding. Unlike soldiers in active duty, when those in the reserve are given five days to report, it is five days to leave a full-time job or a semester of school. Military counseling is available for all military members, both active and reserve, regarding their rights to obtain a discharge. Draft counseling and information on conscientious objection is also available. Contact American Friends Service Committee, 761-8283; the Ann Arbor Draft, G.I. and Vets Counseling Center, 663-5378; or Guild House, 802 Monroe, 662-5189. up information regarding the U-M Teach-In is available at 763-3037.