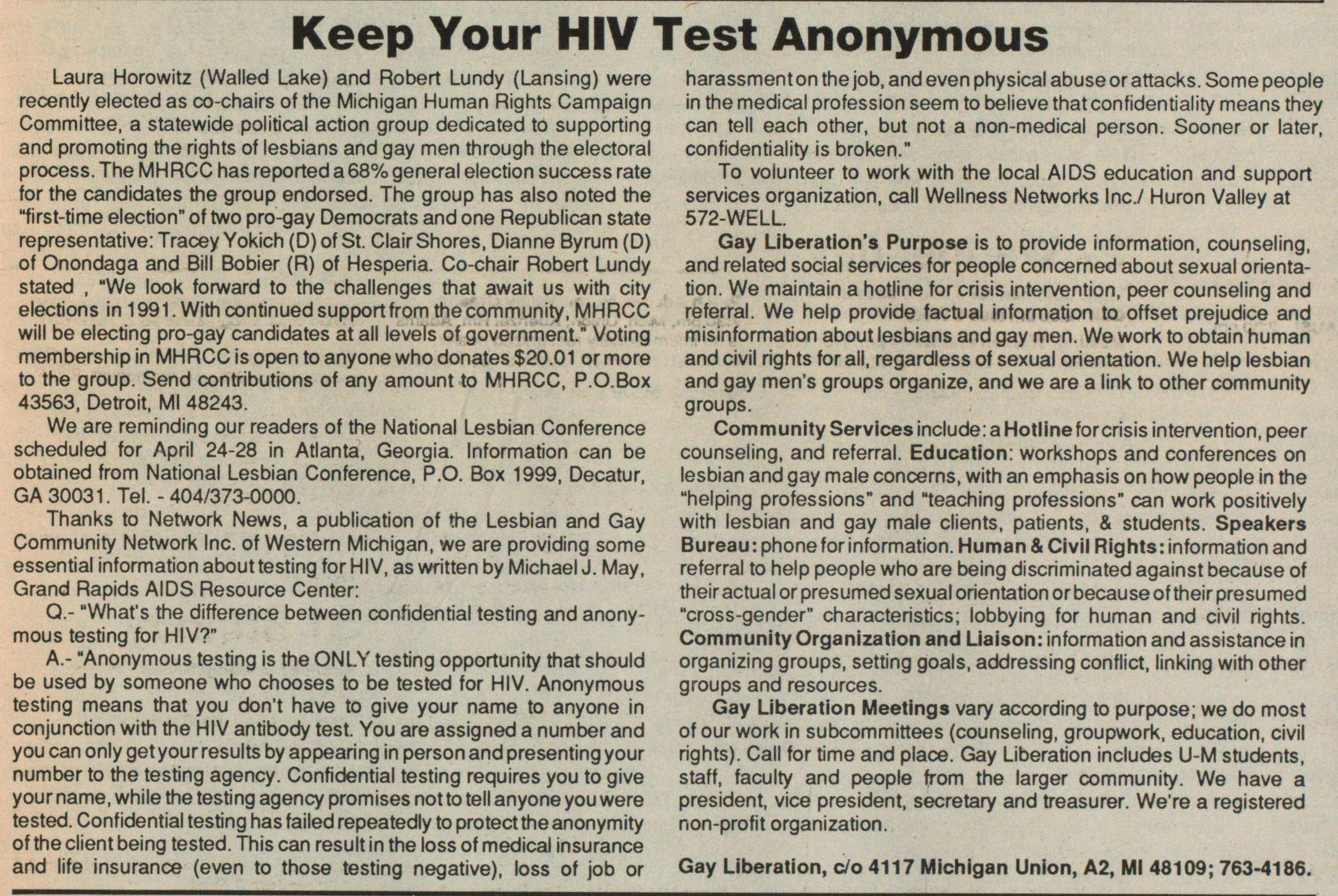 Laura Horowitz (Walled Lake) and Robert Lundy (Lansing) were recently elected as co-chairs of the Michigan Human Rights Campaign Committee, a statewide political action group dedicated to supporting and promoting the rights of lesbians and gay men through the electoral process. The MH RCC has reponed a 68% general election success rate for the candidates the group endorsed. The group has also noted the "first-time election" of two pro-gay Democrats and one Republican state representative: Tracey Yokich (D)of St. ClairShores, Dianne Byrum (D) of Onondaga and Bill Bobier (R) of Hesperia. Co-chair Robert Lundy stated , "We look forward to the challenges that await us with city elections in 1991. With continued support from thecommunity, MHRCC will be electing pro-gay candidates at all levéis of government." Voting membership in MHRCC is open to anyone who donates $20.01 or more to the group. Send contributions of any amount to MHRCC, P.O.Box 43563, Detroit, MI 48243. We are reminding our readers of the National Lesbian Conference scheduled for April 24-28 in Atlanta, Georgia. Information can be obtained from National Lesbian Conference, P.O. Box 1999, Decatur, GA 30031. Tel. - 404373-0000. Thanks to Network News, a publication of the Lesbian and Gay Community Network Inc. of Western Michigan, we are providing some essential information about testing for HIV, as written by Michael J. May, Grand Rapids AIDS Resource Center: "What's the difference between confidential testing and anonymous testing for HIV?" "Anonymous testing is the ONLY testing opportunity that should be used by someone who chooses to be tested for HIV. Anonymous testing means that you don't have to give your name to anyone in conjunction with the HIV antibody test. You are assigned a number and you can only get your results by appearing in person and presenting your number to the testing agency. Confidential testing requires you to give your name, while the testing agency promises not to teil anyone you were tested. Confidential testing has failed repeatedly to protect the anonymity of the dient being tested. This can result in the loss of medical insurance and life insurance (even to those testing negative), loss of job or harassment on the job, and even physical abuse or attacks. Some people in the medical profession seem to believe that confidentiality means they can teil each other, but not a non-medical person. Sooner or later, confidentiality is broken." To volunteer to work with the local AIDS education and support services organization, cali Wellness Networks Inc. Huron Valley at 572-WELL Gay Liberation's Purpose is to provide information, counseling, and related social services for people concerned about sexual orientation. We maintain a hotline for crisis intervention, peer counseling and referral. We help provide factual information to offset prejudice and misinformation about lesbians and gay men. We work to obtain human and civil rights for all, regardless of sexual orientation. We help lesbian and gay men's groups organize, and we are a link to other community groups. Community Services include: a Hotline for crisis intervention, peer counseling, and referral. Education: workshops and conferences on lesbian and gay male concerns, with an emphasis on how people in the "helping professions" and "teaching professions" can work positively with lesbian and gay male clients, patients, & students. Speakers Bureau : phone for information. Human & Civil Rights : information and referral to help people who are being discriminated against because of their actual or presumed sexual orientation or because of their presumed "cross-gender" characteristics; lobbying for human and civil rights. Community Organization and Liaison: nformation and assistance in organizing groups, setting goals, addressing conflict, linking with other groups and resources. Gay Liberation Meetings vary according to purpose; we do most of our work in subcommittees (counseling, groupwork, education, civil rights). Cali for time and place. Gay Liberation includes U-M students, staff, faculty and people from the larger community. We have a president, vice president, secretary and treasurer. We're a registered non-profit organization. Gay Liberation, co 4117 Michigan Union, A2, Ml 48109; 763-4186.