Reopening The Doors Of Perception 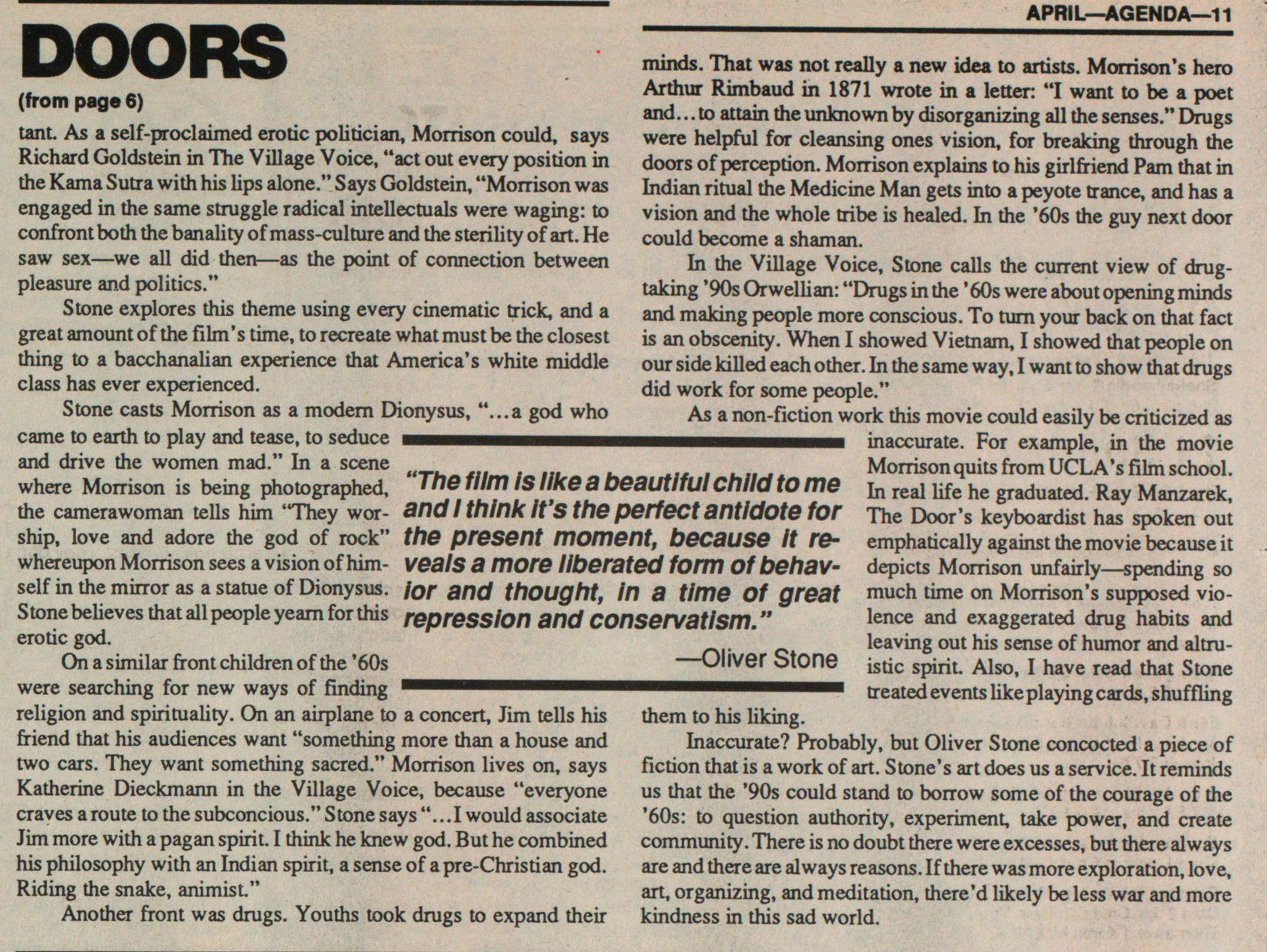 REOPENING THE DOORS OF PERCEPTION

"It was a great era you know, if you remember it correctly"

Now is the time for all good patriots to trash the Sixties and the nearest target is Oliver Stone's latest movie "The Doors." "Jim Morrison is dead, dead as a doornail... His death was a cautionary reminder of the costs of the '60s stupidity that went by the puffed-up title 'counterculture,'" says conservative-pundit George Will in a two-page diatribe in Newsweek.

That sort of revision of history is to be expected from Will, but the majority of film critics I have encountered in print, on radio or TV are afraid to say anything good about Jim Morrison, or Oliver Stone's tribute to his life. In reviews from Time Magazine to National Public Radio, the word is that Morrison's poetry was bad and The Doors' music was mediocre. "Morrison and his band were not political pathfinders, and musically they were close to negligible, with one compelling tune (Light My Fire)," writes Time's Richard Corliss. "Their albums sell almost as well now as they did in the group's brief emminence- but not enough to base a movie on." Remarks Newsweek's David Ansen: "Jim Morrison a great poet? Don't think so."

Now I don't ordinarily rely on Time and Newsweek to help me select the movies I watch, but I am particularly struck by the amount of negative press this film is getting from all quarters.

Even the actor who plays Morrison in "The Doors," Val Kilmer, makes sure that, each time he is interviewed, he puts great distance between himself and the character he played on screen. "Playing (Jim) is like drinking muddy water out of an old boot," said Kilmer in a recent Ann Arbor News article. "A unique experience but not one you'd want to repeat." Given the current conservatism, it is apparently not cool to identify with Morrison or the movie.

The critics, perhaps disregarding their own turbulent youths, (or if George Wills' haircut is any indication, perhaps they never had a turbulent youth) have left out the cultural context of this band and its power within the context of the late '60s and early '70s. This film is nothing less than a portrait of a generation - a generation that, as individuals, did its best to kill paternal authority and become its own person. For many that meant exploring the limits of reality through drugs and spirituality. "When we were playing at Whiskey A Go Go," said Doors keyboardist Ray Manzarek in1967, "we believed that, hey, man, we are fucking taking over the country, we are gonna turn it around, we are gonna make the perfect society." Manzarek and the other Doors believed they were helping to build a new order with new morals and honor, something they believed was more honest than the greed and avarice of their parent's generation.

Jim Morrison's father, Steve Morrison, literally represented the establishment. He was a career military man whose participation in the Gulf of Tonkin incident in 1964 and secret work with atomic weapons pulled him up the ranks to become the youngest Navy admiral ever at age 47. The film alludes to the deep hatred Jim felt toward his father, but never adequately explains it.

In the film's first scene we are swept across the American desert to the eerie, sad accompaniment of "Riders on the Storm." The Morrison family is in a car heading west. The children are in the back sleeping. They are awakened to a tragedy, an incident which is Jim's first introduction to death. The family drives past an overturned truck near which a Pueblo elder lies dead and Indian women stand crying. Mrs. Morrison turns to little Jimmy, who is visibly upset, and tells him it is just a dream. Jimmy turns away and watches the scene out the back window, apparently more identified with the "dream" than the reality in the car. Jim later wrote that this was the "most important moment" in his life. The ghost of the dead elder reappears in scenes throughout the movie, becoming a sort of dream device Stone uses to show what guides Jim's psyche through to the other side- self-destruction and death to some, eternal life to others.

Early in the film, as an up-and-coming rock star, Jim tells reporters that his parents are dead. Later, reporter Patricia Kenneally (Kathleen Quinlan), one of Morrison's many lovers, confronts him backstage before a concert with the fact that his parents are, in fact, alive. Bringing the truth to the surface beings Jim's feelings to the surface. He weeps. In the background, an impatient audience chants, "Jim, Jim, Jim" to which Patricia responds, "See, it doesn't matter." She tells him audiences love him, not his father's or his mother's child. Jim argues "They don't want me, they want my death!"

Jim's quest to be loved is a central theme in the movie given the rebelliousness Jim acts out onstage and off. It also helps to suggest an explanation for his dependence on alcohol. But there was a conspicuous lack of further background on Jim's childhood and family relations. Apparently Stone was forced to leave that to the imagination since: "In the agreement with the Morrisons [Steve and Clara], a clause specified that no mention of them would be made in the film" ("Mr. Mojo Rises," American Film, October 1990).

When Morrison sings his Oedipal opus "The End," he voices the anger of the time. His lyrics, "Father, I want to kill you. Mother, I want to fuck you" were not only a huge shock to the children of the '50s, but a reflection of the same absolute rejection of, and violence against parental power and control that sat hunched at the back of their own psyches. Youths were angry and the Doors acted it out. Youths felt pushed to fight.

Stone explores this theme using every cinematic trick, and a great amount of the film's time, to recreate what must be the closest thing to a bacchanalian experience that America's white middle class has ever experienced.

On a similar front children of the '60s were searching for new ways of finding religion and spirituality. On an airplane to a concert, Jim tells his friend that his audiences want "something more than a house and two cars. They want something sacred." Morrison lives on, says Katherine Dieckmann in the Village Voice, because "everyone craves a route to the subconcious." Stone says "...I would associate Jim more with a pagan spirit. I think he knew god. But he combined his philosophy with an Indian spirit, a sense of a pre-Christian god. Riding the snake, animist."

Another front was drugs. Youths took drugs to expand their minds. That was not really a new idea to artists. Morrison's hero Arthur Rimbaud in 1871 wrote in a letter: "I want to be a poet and... to attain the unknown by disorganizing all the senses." Drugs were helpful for cleansing ones vision, for breaking through the doors of perception. Morrison explains to his girlfriend Pam that in Indian ritual the Medicine Man gets into a peyote trance, and has a vision and the whole tribe is healed. In the '60s the guy next door could become a shaman.

In the Village Voice, Stone calls the current view of drug-taking '90s Orwellian: "Drugs in the '60s were about opening minds and making people more conscious. To turn your back on that fact is an obscenity. When I showed Vietnam, I showed that people on our side killed each other. In the same way, I want to show that drugs did work for some people."

As a non-fiction work this movie could easily be criticized as inaccurate. For example, in the movie Morrison quits from UCLA's film school. In real life he graduated. Ray Manzarek, The Door's keyboardist has spoken out emphatically against the movie because it depicts Morrison unfairly- spending so much time on Morrison's supposed violence and exaggerated drug habits and leaving out his sense of humor and altruistic spirit. Also, I have read that Stone treated events like playing cards, shuffling them to his liking.

Inaccurate? Probably, but Oliver Stone concocted a piece of fiction that is a work of art. Stone's art does us a service. It reminds us that the '90s could stand to borrow some of the courage of the '60s: to question authority, experiment, take power, and create community. There is no doubt there were excesses, but there always are and there are always reasons. If there was more exploration, love, art, organizing, and meditation, there'd likely be less war and more kindness in this sad world.

"The film is like a beautiful child to me and I think it's the perfect antidote for the present moment, because it reveals a more liberated form of behavior and thought, in a time of great repression and conservatism."