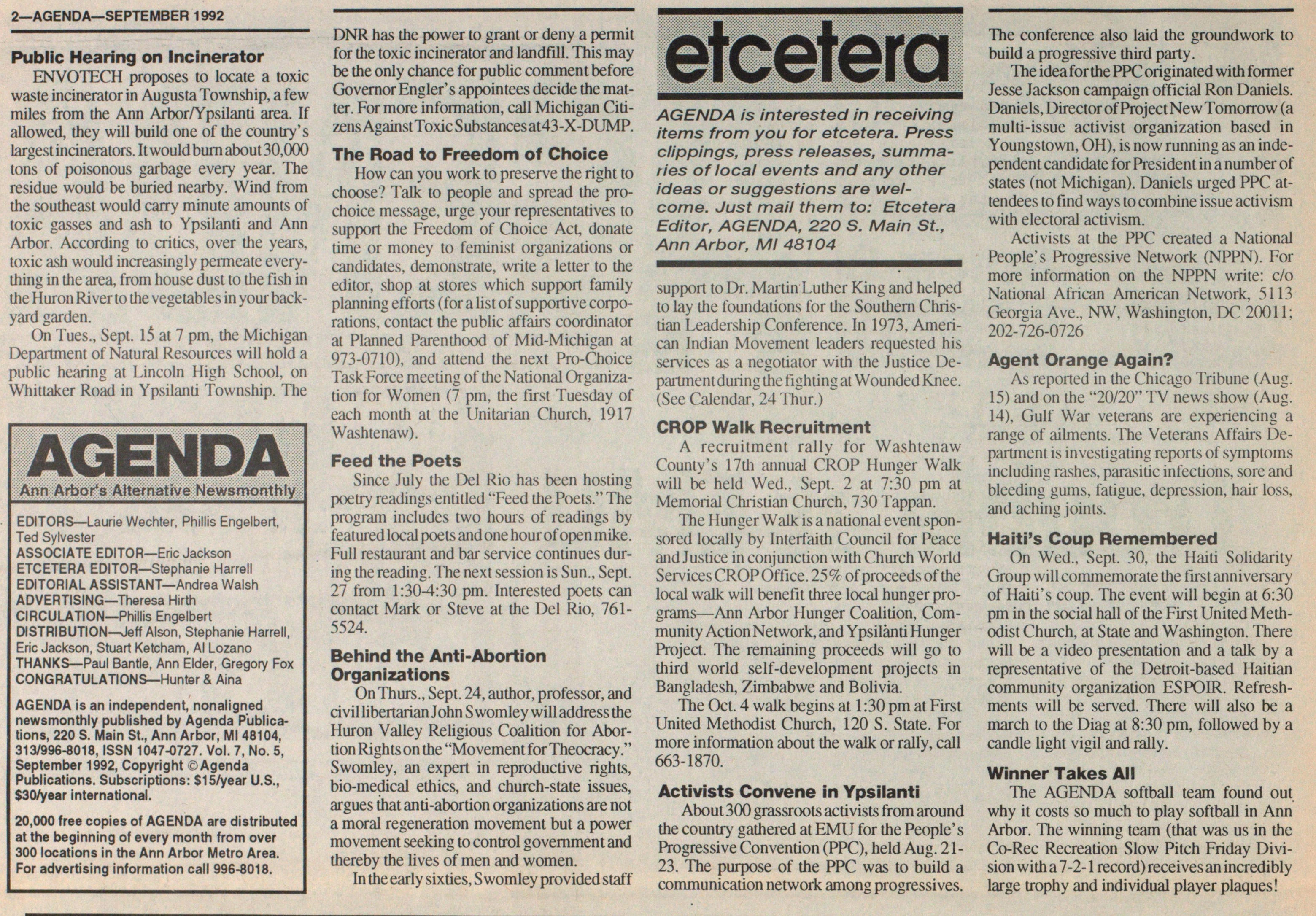 Public Hearing on Incinerator ENVOTECH proposes to lócate a toxic waste incinerator in Augusta Township, a few miles from the Ann ArborYpsilanti area. If allowed, they will build one of the country' s largest incinerators. It would bum about 30,000 tons of poisonous garbage every year. The residue would be buried nearby. Wind from the southeast would carry minute amounts of toxic gasses and ash to Ypsilanti and Ann Arbor. According to critics, over the years, toxic ash would increasingly permeate everything in the area, from house dust to the fish in the Huron River to the vegetables in your backyard garden. On Tues., Sept. 15 at 7 pm, the Michigan Department of Natural Resources will hold a public hearing at Lincoln High School, on Whittaker Road in Ypsilanti Township. The DNR has the power to grant or deny a pennit for the toxic incinerator and landfill. This may be the only chance for public commentbefore Governor Engler's appointees decide the matter. For more information, cali Michigan CitizensAgainstToxicSubstancesat43-X-DUMP. The Road to Freedom of Choice How can you work to preserve the right to choose? Talk to people and spread the prochoice message, urge your representatives to support the Freedom of Choice Act, dónate time or money to feminist organizations or candidates, demónstrate, write a letter to the editor, shop at stores which support family planning efforts (for a list of supportive corporations, contact the public affairs coördinator at Planned Parenthood of Mid-Michigan at 973-0710), and attend the next Pro-Choice Task Force meeting of the National Organiation for Women (7 pin, the first Tuesday of each month at the Unitarian Church, 1917 Washtenaw). Feed the Poets Since July the Del Rio has been hosting poetry readings entitled '"Feed the Poets." The program includes two hours of readings by featured local poets and one hour of open inike. Full restaurant and bar service continúes during the reading. The next session is Sun., Sept. 27 from 1:30-4:30 pm. Interested poets can contact Mark or Steve at the Del Rio, 7615524. Behind the Anti-Abortion Organizations On Thurs., Sept. 24, author, professor, and civil libertarían John S womley will address the Huron Valley Religious Coalition for Abortion Rightson the "Movement forTheocracy." Swomley, an expert in reproductive rights, bio-medical ethics, and church-state issues, argües that anti-abortion organizations are not a moral regeneration movement but a power movement seeking to control govemment and thereby the lives of men and women. In the early sixties, Swomley provided staff support to Dr. Martin Luther King and helped to lay the foundations lor the Southem Christian Leadership Conference. In 1973, American Indian Movemeni leaders requested nis services as a negotiator with the Justice Deparünent during tlie fighting at Wounded Knee. (SeeCalendai"24Thur.) CROP Walk Recruitment A recruitment rally for Washtenaw County's 17th annual CROP Hunger Walk will be held Wed., Sept. 2 at 7:30 pm at Memorial Christian Church, 730 Tappan. The I lunger Walk is a national event sponsored locally by Interfaith Council for Peace and Justice in conjunction with Church World ServicesCROPÖffice. 25% ofproceedsof the local walk will benefit three local hunger programs - Ann Arbor Hunger Coalition, Coinmunity Action Network, and Ypsilanti Hunger Project. The remaining proceeds will go to third world self-development projects in Bangladesh, Zimbabwe and Bolivia. The Oct. 4 walk begins at 1 :30 pm at First United Methodist Church, 120 S. State. For more information about the walk or rally, cali 663-1870. Activists Convene in Ypsilanti About 300 grassroots activists from around the country gathered at EMU for the People's Progressive Convention (PPC), held Aug. 2123. The purpose of the PPC was to build a communication network among progressives. The conference also laid the groundwork to build a progressive third party. The idea forthe PPC originated with former Jesse Jackson campaign official Ron Daniels. Daniels, Director of Project Ne w Tomorrow (a multi-issue activist organization based in Youngstown, OH), is now running as an independent candidate for President in a number of states (not Michigan). Daniels urged PPC attendees to find ways to combine issue activism with electoral activism. Activists at the PPC created a National Pcople's Progressive Network (NPPN). For more infonnation on the NPPN write: co National African American Network, 5113 Georeia Ave., NW, Washinston, DC 2001 1: 202-726-0726 Agent Orange Again? As reponed in the Chicago Tribune (Aug. 15) and on the "2020" TV news show (Aug. 14), Gulf War veterans are experiencing a range of ailments. The Veterans Affairs Department is investigating reports of symptoms including rashes, parasitic infections, sore and Meeding gums, fatigue, depression, hair loss, and aching joints. Haiti's Coup Remembered On Wed., Sept. 30, the Haití Solidarity Group will commemorate the firstanniversary of Haiti's coup. The event will begin at 6:30 pm in the social hall of the First United Methodist Church, at State and Washington. There will be a video presentation and a talk by a representative of the Detroit-based Haitian community organization ESPOIR. Refreshments will be served. There will also be a march to the Diag at 8:30 pm, followed by a candle light vigil and rally. Winner Takes All The AGENDA softball team found out why it costs so much to play softball in Ann Arbor. The winning team (that was us in the Co-Ree Recreation Slow Pitch Friday División with a 1 record) receivesan incredibly large trophy and individual player plaques! AGENDA is nterested in receiving items from you for etcétera. Press clippings, press releases, summaries of local events and any other ideas or suggestions are welcome. Just mail them to: Etcétera Editor, AGENDA, 220 S. Main St., AnnArbor, MI 48104