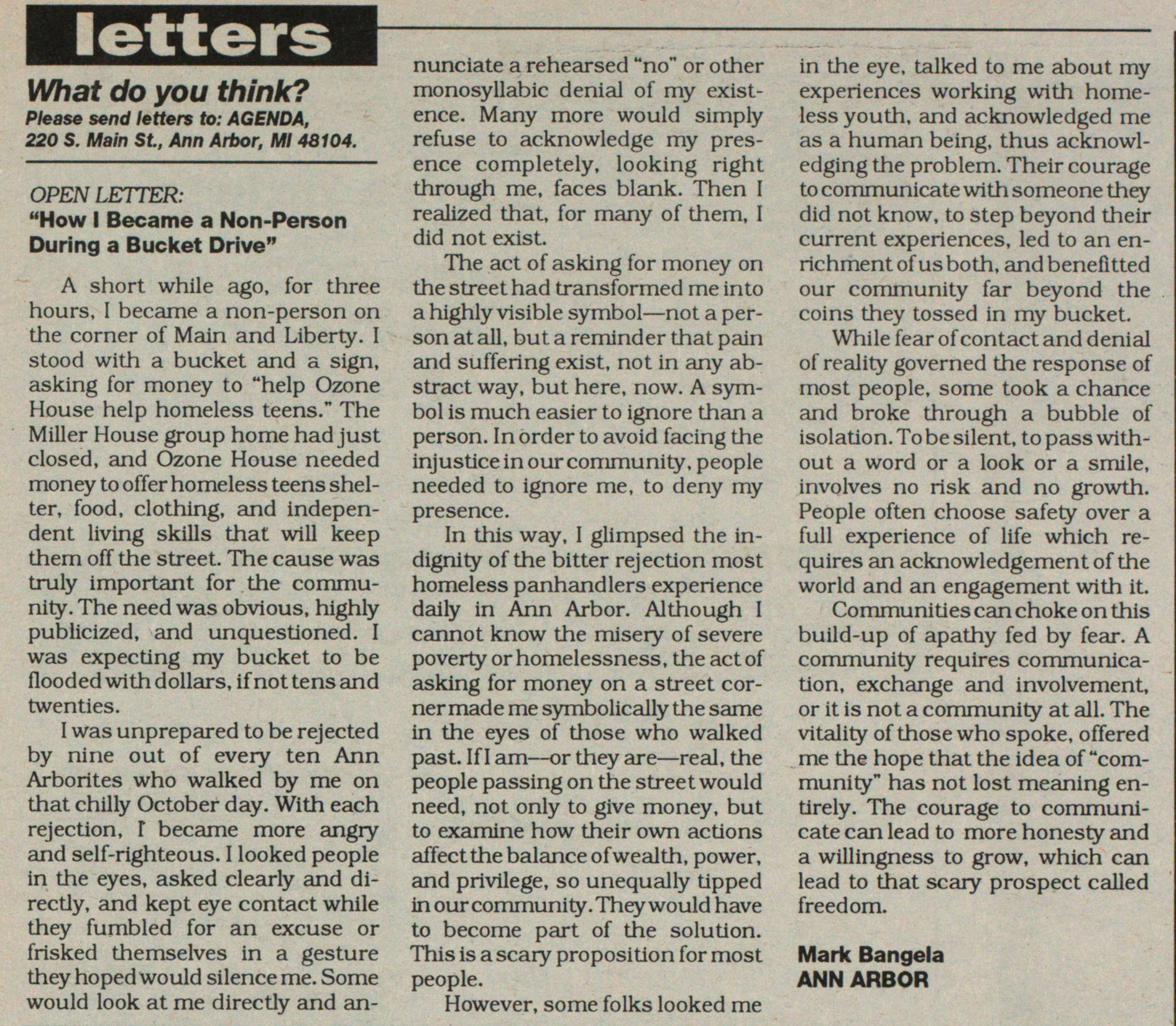 What do you think? Please send letten to: AGENDA, 220 S. Main St, Ann Arbor, Ml 48104. OPEN LETTER: "How I Became a Non-Person During a Bucket Drive" A short while ago, for three hours, I became a non-person on the corner of Main and Liberty. I stood with a bucket and a sign, asking for money to "help Ozone House help homeless teens." The Miller House group home had just closed, and Ozone House needed money to offer homeless teens shelter, food, clothing, and independent living skills that will keep them off the Street. The cause was truly important for the community. The need was obvious, highly publicized, and unquestioned. I was expecting my bucket to be flooded with dollars, if not tens and twenties. I was unprepared to be rejected by nine out of every ten Ann Arborites who walked by me on that chilly October day. With each rejection, f became more angry and self-righteous. I looked people in the eyes, asked clearly and directly, and kept eye contact while they fumbled for an excuse or frisked themselves in a gesture they hoped would silence me. Some would look at me directly and nunciate a rehearsed "no" or other monosyllabic denial of my existence. Many more would simply refuse to acknowledge my presence completely, looking right through me, faces blank. Then I realized that, for many of them, I did not exist. The act of asking for money on the street had transformed me into a highly visible symbol - not a person at all, but a reminder that pain and suffering exist, not in any abstract way, but here, now. A symbol is much easier to ignore than a person. In order to avoid facing the injusticeinourcommunity.people needed to ignore me, to deny my presence. In this way, I glimpsed the indignity of the bitter rejection most homeless panhandlers experience dally in Ann Arbor. Although I cannot know the misery of severe poverty or homelessness, the act of asking for money on a street cornermade me symbolically the same in the eyes of those who walked past. If I am - or they are - real, the people passing on the street would need, not only to give money, but to examine how their own actions affect the balance of wealth, power, and privilege, so unequally tipped in ourcommunity. They would have to become part of the solution. This is a scary propositlon for most people. However, some folks looked me in the eye, talked to me about my experiences working with homeless youth, and acknowledged me as a human being, thus acknowledging the problem. Their courage to communicate with someone they did not know, to step beyond their current experiences, led to an enrichment of us both, and benefitted our community far beyond the coins they tossed in my bucket. While fear of contact and denial of reality governed the response of most people, some took a chance and broke through a bubble of isolation. To be silent, to pass without a word or a look or a smile, involves no risk and no growth. People often choose safety over a full experience of life which requires an acknowledgement of the world and an engagement with it. Communities can choke on this build-up of apathy fed by fear. A community requires communication, exchange and involvement, or it is not a community at all. The vitality of those who spoke, offered me the hope that the idea of "community" has not lost meaning entirely. The courage to communicate can lead to more honesty and a willingness to grow, which can lead to that scary prospect called freedom.