A2 High School Pac Takes On School Board Elections 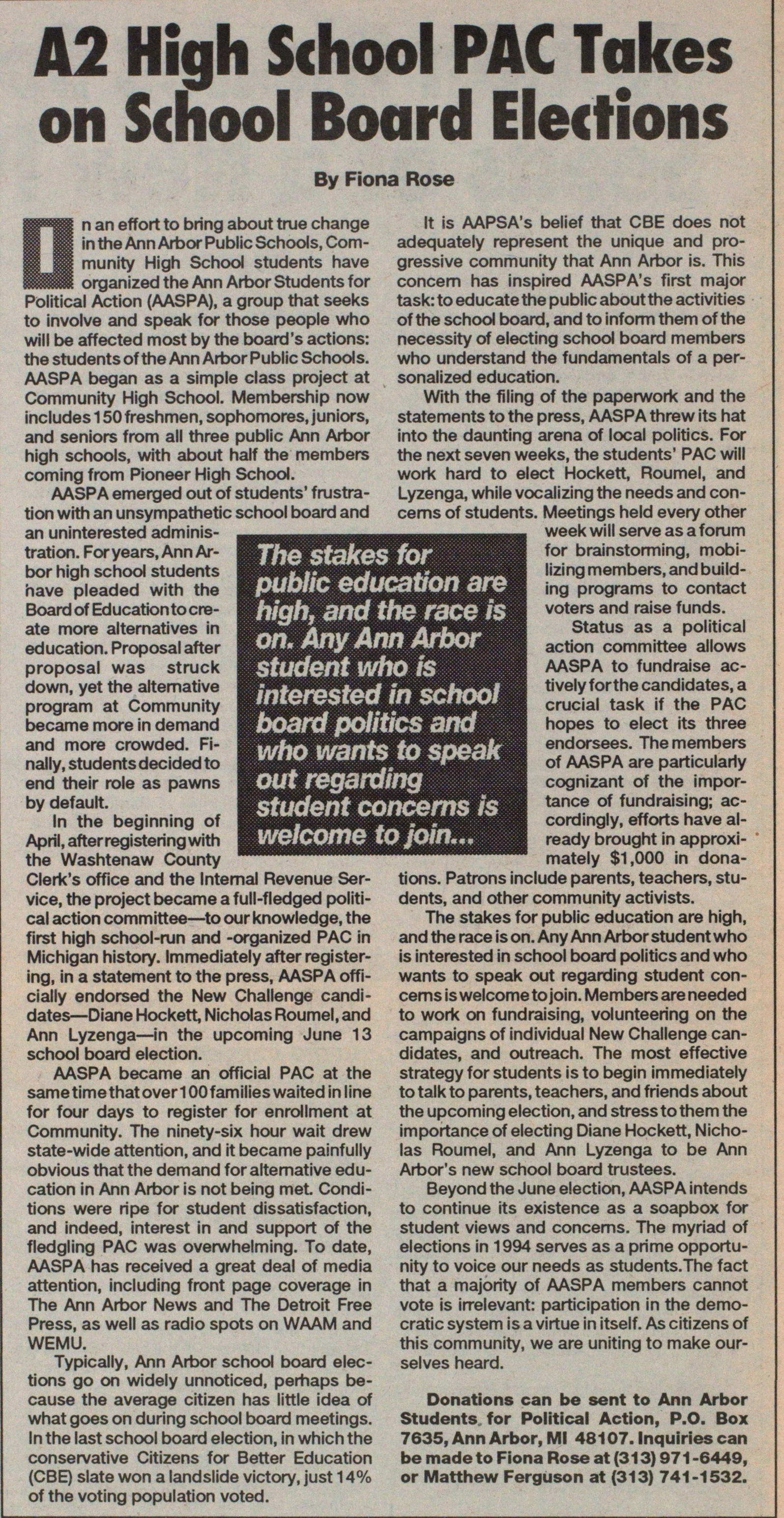 Dn an effort to bring about true change n the Ann Arbor Public Schools, Community High School students have organized the Ann Arbor Students for Political Action (AASPA), a group that seeks to involve and speak for those people who will be affected most by the board's actions: the students of the Ann Arbor Public Schools. AASPA began as a simple class project at Community High School. Membership now includes 1 50 freshmen, sophomores, juniors, and seniors trom all three public Ann Arbor high schools, with about half the members coming from Pioneer High School. AASPA emerged out of students' frustration with an unsympathetic school board and an uninterested administration. Foryears, Anti Arbor high school students have pleaded with the Board of Education to create more alternativos in education. Proposal after proposal was struck down, yet the alternativo program at Community became more in demand and more crowded. Finally, students decided to end their role as pawns by default. In the beginning of April, after registering with the Washtenaw County Clerk's office and the Interna! Revenue Service, the project became a f ull-f ledged political action committee - to our knowledge, the first high school-run and -organized PAC in Michigan history. Immediately after registering, in a statement to the press, AASPA off icially endorsed the New Challenge candi - dates - Diane Hockett, Nicholas Roumel, and Ann Lyzenga - in the upcoming June 13 school board election. AASPA became an official PAC at the same timethat over 100 families waited in line for four days to register for enrollment at Community. The ninety-six hour wait drew state-wide attention, and it became painfully obvious that the demand foraltemative education in Ann Arbor is not being met Conditions were ripe for student dissatisfaction, and indeed, interest in and support of the fledgling PAC was overwhelming. To date, AASPA has received a great deal of media attention, including front page coverage in The Ann Arbor News and The Detroit Free Press, as well as radio spots on WAAM and WEMU. Typically, Ann Arbor school board elections go on widely unnoticed, perhaps because the average citizen has little idea of what goes on during school board meetings. In the last school board election, in which the conservative Citizens for Better Education (CBE) slate won a landslide victory, just 1 4% of the voting population voted. It is AAPSA's belief that CBE does not adequately represent the unique and progressive community that Ann Arbor is. This concern has inspired AASPA's first major task: to edúcate the public about the act i vities of the school board, and to inform them of the necessity of electing school board members who understand the fundamentals of a personalized education. With the filing of the paperwork and the statements to the press, AASPA threw its hat into the daunting arena of local politics. For the next seven weeks, the students' PAC will work hard to elect Hockett, Roumel, and Lyzenga, whiie vocalizing the needs and concerns of students. Meetings held every other week will serve as a forum for brainstorming, mobilizing members, and building programs to contact voters and raise funds. Status as a poiitical action committee allows AASPA to fundraise actively forthe candidates, a crucial task if the PAC hopes to elect its three endorsees. The members of AASPA are particularly cognizant of the importance of fundraising; accordingly, efforts have already brought in approximately $1,000 in tions. Patrons include parents, teachers, students, and other community activists. The stakes for public education are high, and the race son. Any Ann Arbor student who is interested in school board politics and who wants to speak out regarding student concerns is welcome to join. Members are needed to work on fundraising, volunteering on the campaigns of individual New Challenge candidates, and outreach. The most effective strategy for students is to begin immediately to talk to parents, teachers, and friends about the upcoming election, and stresstothem the importance of electing Diane Hockett, Nicholas Roumel, and Ann Lyzenga to be Ann Arbor's new school board trustees. Beyond the June election, AASPA intends to continue its existence as a soapbox for student views and concerns. The myriad of elections in 1994 serves as a prime opportunity to voice our needs as students.The fact that a majority of AASPA members cannot vote is irrelevant: participation in the democratie system is a virtue in itself. As citizens of this community, we are uniting to make ourselves heard. Donations can be sent to Ann Arbor Students for Political Action, P.O. Box 7635, Ann Arbor, Ml 48107. Inquiries can be made to Fiona Rose at (3 1 3) 97 1 -6449, or Matthew Ferguson at (313) 741-1532.