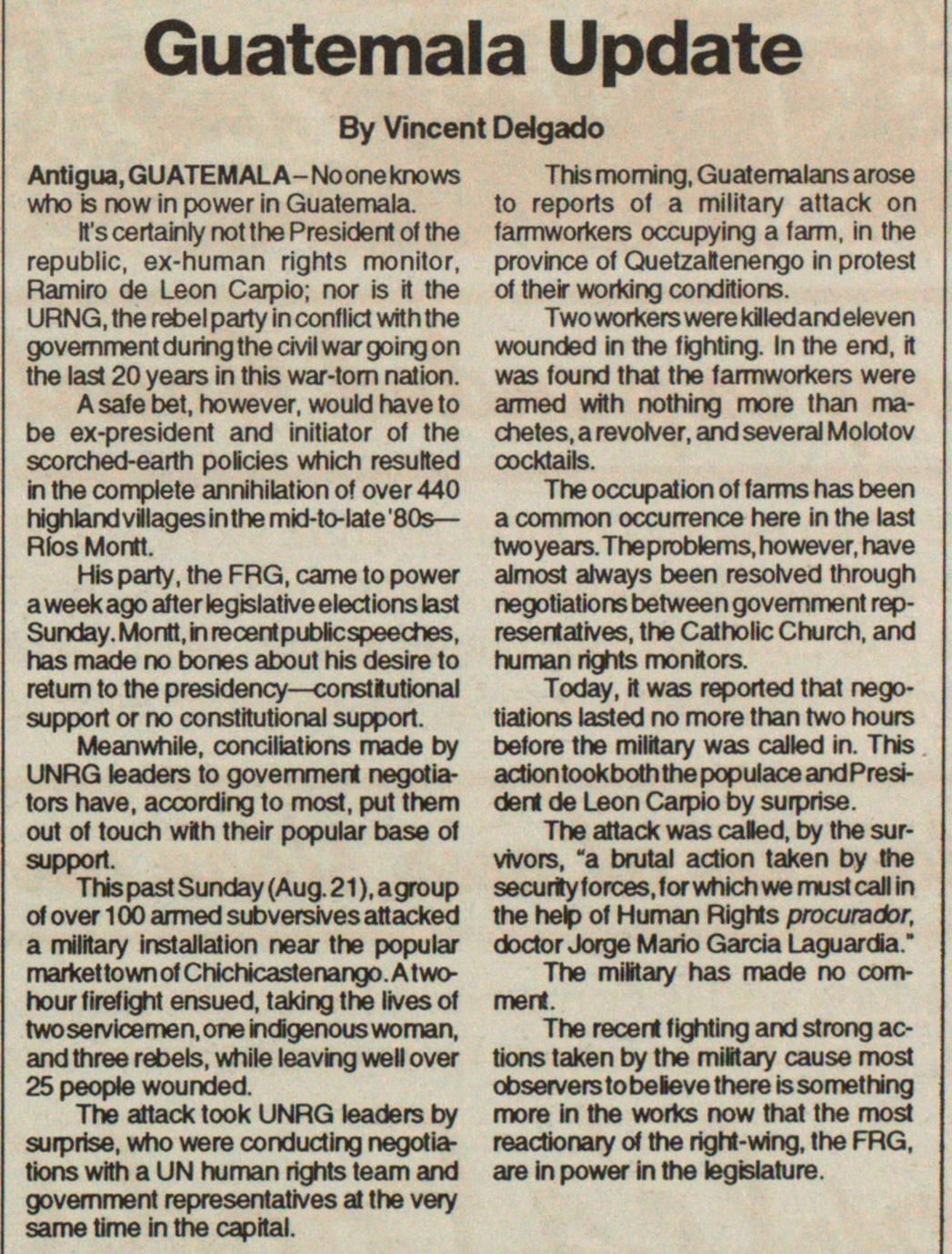 Antigua, Noone knows who is now in power in Guatemala. It's certainly not the President ol the republic, ex-human rights monitor, Ramiro de León Carpió; nor is it the URNG. the rebel party in conflict with the govemment during the civil war going on the last 20 years in this war-tom nat ion. A sale bet, however, would have to be ex-president and initiator of the scorched-earth poicies wtiich resulted in the complete annihilatbn of over 440 highlandvillagesinthemid-to-late'80s- Rlos Montt. His party, the FRG, carne to power a week ago afler legislative elections last Sunday. Montt, in recent pubücspeeches, has made no bones about his desire to return to the presidency - consttutional support or no constitutional support. Meanwhile, conciliations made by UNRG leaders to govemment negotiators have, according to most, put them out of touch wlh their popular base of support. This past Sunday (Aug. 21 ), agroup of over 1 00 armed subverstves attacked a military installation near the popular markettown of Chichicastenango. A twohour firefkjht ensued, taking the lives of twoservicemen.oneinoSgenouswoman, and three rebels, while leaving well over 25 people wounded. The attack took UNRG leaders by surprise, who were conducting negotiatkxis with a UN human rights team and govemment representaties at the very same time in the capital. Thismoming, Gualemalans aróse to reports ol a military attack on farmworkers occupying a farm, in the province ol Quetzaienengo in protest of their working conditions Two workers were klled and eleven wounded in the fighting. In the end, it was foond that the farmworkers were armed with nothing more than machetes, a revolver, and several Molotov cocktails. The occupation of farms has been a common occurrence here in the last two years.Theproblems,however, have almost always been resolved through negoliations between govemment represent alrves, the Catholic Church, and human rights monitors. Today, it was reported that negotiations lasted no more than two hours before the military was called in. This adiontookbotrithepopulaceandPresident de León Carpió by surprise. The attack was caled, by the survrvors, "a brutal action taken by the security torces, lor which we mu si cali in the hei) ol Human Rights procurador, doctor Jorge Mario García Laguardia." The military has made no comme nt The recent fighting and strong actions taken by the military cause most observers tobeieve there issomelhing more in the works now that the most reactionary of the right-wing, the FRG, are In power in the legislatura.