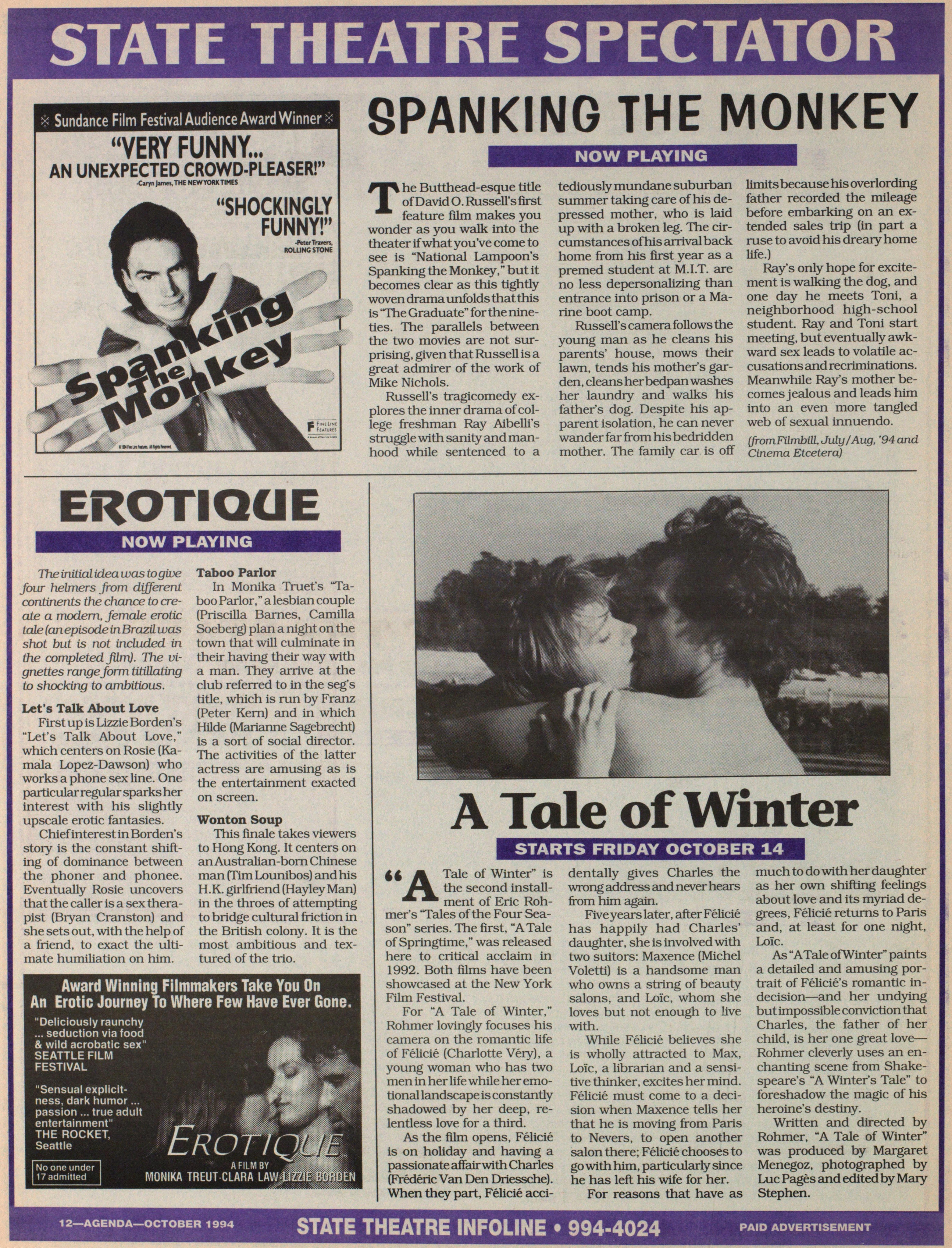 The Butthead-esque title of David O. Russell's first feature film makes you wonder as you walk into the theater if what you've come to see is "National Lampoon's Spanking the Monkey," but it becomes clear as this tightly woven drama unfoldsthatthis is "The Gradúate" for the nineties. The parallels between the two movies are not surprising, given that Russell is a great admirer of the work of Mike Nichols. Russell's tragicomedy explores the inner drama of college freshman Ray Aibelli's struggle with sanity and raanhood while sentenced to a tediously mundane suburban suramer taking care of his depressed mother, who is laid up with a broken leg. The circumstances of his arrival back home from his first year as a premed student at M.I.T. are no less depersonalizing than entrance into prison or a Marine boot camp. Russell's camera follows the young man as he cleans his parents' house, mows their lawn, tends his mother's garden, cleans herbedpan washes her laundry and walks his father's dog. Despite his apparent isolation, he can never wander far from his bedridden mother. The family car is off limite because his overlording father recorded the mileage before embarking on an extended sales trip (in part a ruse to avoid his dreary home Ufe.) Ray's only hope for excitement is walking the dog, and one day he meets Toni, a neighborhood high-school student. Ray and Toni start meeting, but eventually awkward sex leads to volatile accusations and recriminations. Meanwhile Ray's mother becomes jealous and leads him into an even more tangled web of sexual innuendo. (fromFHmbiU.,JulyAug, '94 and Cinema Etcétera) "VERY FUNNY... AN UNEXPECTED CROWD-PLEASER!" -Caryn )amn,THE NEWYOKK TIMES "SHOCKINGLY A k FUNNY!" UTtk -fcttrTrwen, V ROLLING STONE _ -. K HL. FEAtutes Tr 4'f H B & ,. .. I k The initial idea was togive Jour helmers from different continents the chance to créate a modem, femóle erotic tale (anepisodeinBrazil was shot but is not included in the completedJUm). The vignettes range form tüMating to shocking to ambitious. Let's Talk About Love First up is Lizzie Borden's "Let's Talk About Love," which centers on Rosie (Kamala Lopez-Dawson) who works a phone sex line. One particular regular sparks her interest with his slightly upscale erotic fantasies. Chief interest in Borden's story is the constant shifting of dominance between the phoner and phonee. Eventually Rosie uncovers that the caller is a sex therapist (Bryan Cranston) and she sets out, with the help of a friend, to exact the ultímate humiliation on him. Taboo Parlor In Monika Truet's Taboo Parlor," a lesbian couple (Priscilla Barnes, Camilla Soeberg) plan a night on the town that will culminate in their having their way with a man. They arrive at the club referred to in the seg's title, which is run by Franz (Peter Kern) and in which Hilde (Marianne Sagebrecht) is a sort of social director. The actMties of the latter actress are amusing as is the entertainment exacted on screen. Wonton Soup This finale takes viewers to Hong Kong. It centers on an Australian-born Chinese man (Tim Lounibos) and his H.K. girlfriend (Hayley Man) in the throes of attempting to bridge cultural friction in the British colony. It is the most ambitious and textured of the trio. A Tale of Winter (4 A Tale of Winter" is M the second installA ment of Eric Rohmer's Tales of the Four Season" series. The first, "ATale of Springtime," was released here to critical acclaim in 1992. Both films have been showcased at the New York Film Festival. For "A Tale of Winter," Rohmer lovingly focuses his camera on the romantic life of Félicié (Charlotte Véry), a young woman who has two men in her life while her emotional landscape is constantly shadowed by her deep, relentless love for a third. As the film opens, Félicié is on holiday and having a passionate affair with Charles (Frédéric Van Den Driessche). When they part, Félicié dentally gives Charles the wrong address and never hears from him again. Five years later, after Félicié has happily had Charles' daughter, she is involved with two suitors: Maxence (Michel Voletti) is a handsome man who owns a string of beauty salons, and Loïc, whom she loves but not enough to live with. While Félicié believes she is wholly attracted to Max, Loïc, a librarían and a sensitive thinker , excites her mind. Félicié must come to a decisión when Maxence tells her that he is moving from Paris to Never s, to open another salon there; Félicié chooses to go with him, particularly since he has left his wife for her. For reasons that have as much to do with her daughter as her own shilling feelings about love and its myriad degrees, Félicié returns to Paris and, at least for one night, Loïc. As "ATale ofWinter" paints a detailed and amusing portrait of Félicié's romantic indecisión - and her undying but impossible conviction that Charles, the father of her child, is her one great love - Rohmer cleverly uses an enchanting scène from Shakespeare's "A Winter's Tale" to foreshadow the magie of his heroine's destiny. Written and directed by Rohmer, "A Tale of Winter" was produced by Margaret Menegoz, photographed by Luc Pages and edited by Mary Stephen. - Kir ■tTTSfftYnTBH E; ■■■■ -i :??ssl51 WÈ 1 TU ETull'B MêmwSmBÊmB) KAJJ!IJ-U;mjJtHI!UiJffiT!ffMfflfflg- I