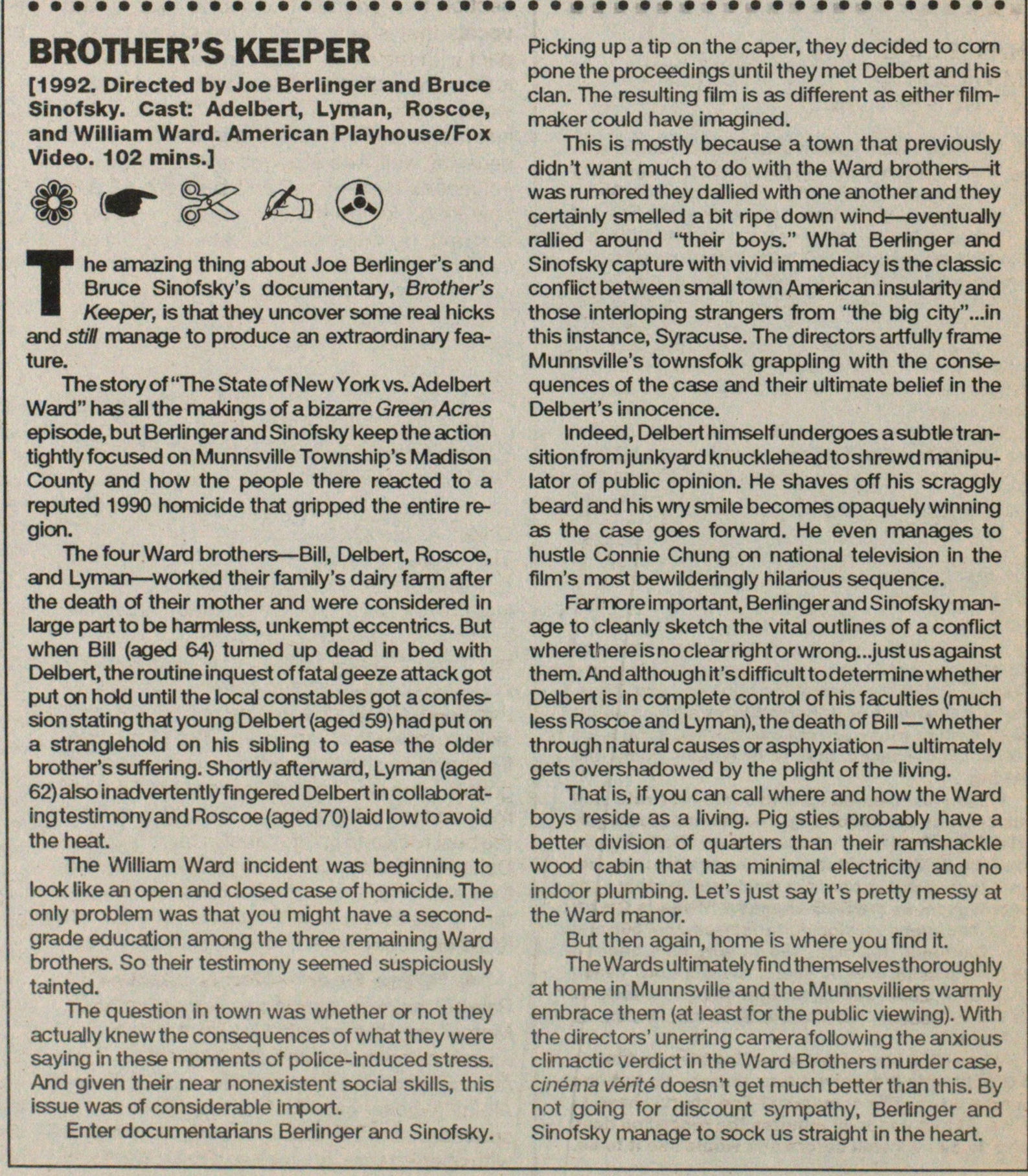 [1992. Direct ed by Joe Berlinger and Bruce Sinofsky. Cast: Adelbert, Lyman, Roscoe, and William Ward. American PlayhouseFox Video. 102 mins.] The amazing thing about Joe Berlinger's and Bruce Sinofsky's documentary, Brother's Keeper, is that they uncover some real hicks and still manage to produce an extraordinary feature. The story of "The State of New York vs. Adelbert Ward" has all the makings of a bizarre Green Acres episode, but Berlinger and Sinofsky keep the action tightly focused on Munnsville Township's Madison County and how the people there reacted to a reputed 1990 homicide that gripped the entire region. The four Ward brothers- Bill, Detbert, Roscoe, and Lyman - worked their family's dary farm after the death of their mother and were considered in large part to be harmless, unkempt eccentrics. But when Bill (aged 64) tumed up dead in bed with Delbert, the routine inquest of fatal geeze attack got put on hold until the local constables got a confession stating that young Delbert (aged 59) had put on a strangiehold on his sibling to ease the older brother's suffering. Shortly afterward, Lyman (aged 62)also inadvertently finge red Delbert in collaboratng testimony and Roscoe (aged 70) laid low to avoid the heat. The William Ward incident was beginning to look like an open and closed case of homicide. The only problem was that you might have a secondgrade education among the three remaining Ward brothers. So their testimony seemed suspiciously tainted. The question in town was whether or not they actually knew the conseq uencesofwhattheywere saying in these moments of police-induced stress. And given their near nonexistent social skills, this issue was of considerable import. Enter documentarians Berlinger and Sinofsky. Picking up a tip on the caper, they decided to corn pone the proceedings until they met Delbert and his clan. The resulting film s as different as either filmmaker could have imagined. This is mostly because a town that previously didn't want much to do with the Ward brothers - it was rumored they dallied with one another and they certainly smelled a bit ripe down wind - eventually rallied around "their boys." What Beriinger and Sinofsky capture with vivid immediacy is the classic conflict between small town American insularity and those nterioping strangers from "the big city"...in this instance, Syracuse. The directors artfully frame Munnsville's townsfolk grappling with the consequences of the case and their ultímate belief in the Delbert's innocence. Indeed, Delbert himself undergoes a subtle transitionfromjunkyard knuckleheadtoshrewd manipulator of public opinión. He shaves off his scraggly beard and his wry smile becomes opaquely winning as the case goes forward. He even manages to hustle Connie Chung on national televisión in the film's most bewilderingly hilarious sequence. Far more important, Beriinger and Sinofsky manage to cleanly sketch the vital outlines of a conflict wherethereisnoclearrightorwrong...justusagainst them.Andalthoughit'sdifficulttodeterminewhether Delbert is in complete control of his faculties (much less Roscoe and Lyman), the death of Bill - wh ether through natural causes orasphyxiation - ultimately gets overshadowed by the plight of the living. That is, f you can cali where and how the Ward boys reside as a living. Pig sties probably have a better división of quarters than their ramshackle wood cabin that has minimal electricrty and no indoor plumbing. Let's just say it's pretty messy at the Ward manor. But then again, home is where you find it. The Wards ultimately find themselvesthoroughly at home in M unnsville and the M unnsvilliers warmly embrace them (at least for the public viewing). With the directors' unerring camera following the anxious climactic verdict in the Ward Brothers murder case, cinéma vérité doesn't get much better than this. By not going for discount sympathy, Beriinger and Sinofsky manage to sock us straight in the heart.