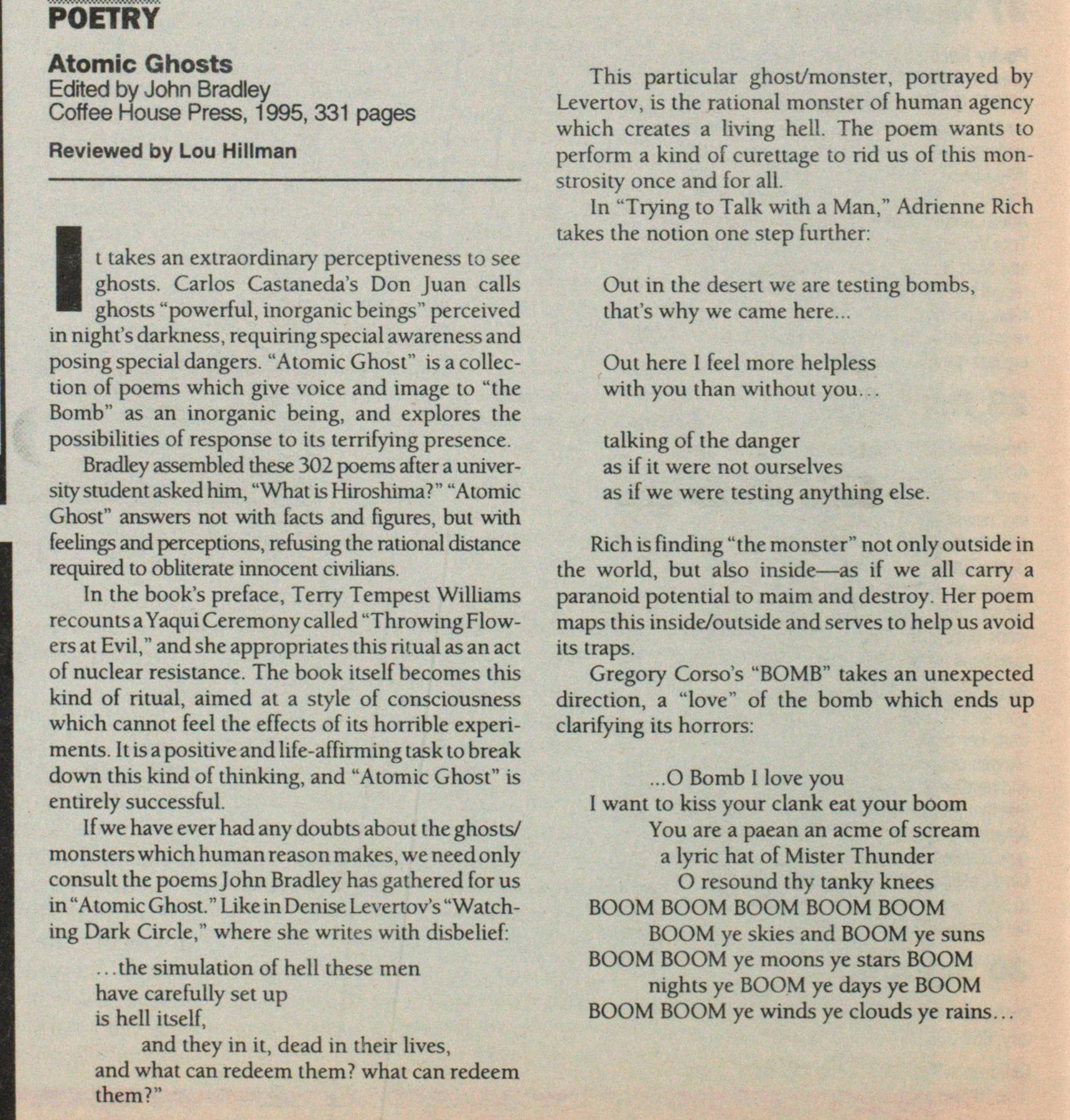 Edited by John Bradley Coffee House Press, 1995, 331 pages It takes an extraordinary perceptiveness to see ghosts. Carlos Castaneda's Don Juan calis ghosts "powerful, inorganic beings" perceived in night's darkness, requiring special awareness and posing special dangers. "Atomic Ghost " isacollection of poems which give voice and image to "the Bomb" as an inorganic being, and explores the possibilities of response to its terrifying presence. Bradley assembled these 302 poems after a university student asked him, "What is Hiroshima? " "Atomic Ghost" answers not with facts and figures, but with m feelings and perceptions, refusing the rational distance required to oblitérate innocent civilians. In the book's preface, Terry Tempest Williams recounts a Yaqui Ceremony called "Throwing Flowers at Evil," and she appropriates this ritual as an act I of nuclear resistance. The book itself becomes this kind of ritual, aimed at a style of consciousness which cannot feel the effects of its horrible experiments. It is a positive and life-affirming task to break down this kind of thinking, and "Atomic Ghost" is entirely successful. If we have ever had any doubts about the ghosts monsters which human reason makes, we need only consult the poems John Bradley has gathered for us in "Atomic Ghost." Like in Denise Levertov's "Watching Dark Circle," where she writes with disbelief: . . the simula tion of heil these men have carefully set up is heil itself, and they in it, dead in their lives, and what can redeem them? what can redeem them?" This particular ghostmonster, portrayed by Levertov, is the rational monster of human agency which creates a living heil. The poem wants to perform a kind of curettage to rid us of this monstrosity once and for all. In "Trying to Talk with a Man," Adrienne Rich takes the notion one step further: Out in the desert we are testing bombs, that's why we came here... Out here I feel more helpless with you than without you. . talking of the danger as if it were not ourselves as if we were testing anything else. Rich is finding "the monster" not only outside in the world, but also inside - as if we all carry a paranoid potential to maim and destroy. Her poem maps this insideoutside and serves to help us avoid its traps. Gregory Corso's "BOMB" takes an unexpected direction, a "love" of the bomb which ends up clarifying its horrors: ...O Bomb 1 love you I want to kiss your clank eat your boom You are a paean an acme of scream a lyric hat of Mister Thunder O resound thy tanky knees BOOM BOOM BOOM BOOM BOOM BOOM ye skies and BOOM ye suns BOOM BOOM ye moons ye stars BOOM nights ye BOOM ye days ye BOOM BOOM BOOM ye winds ye clouds ye rains. . .