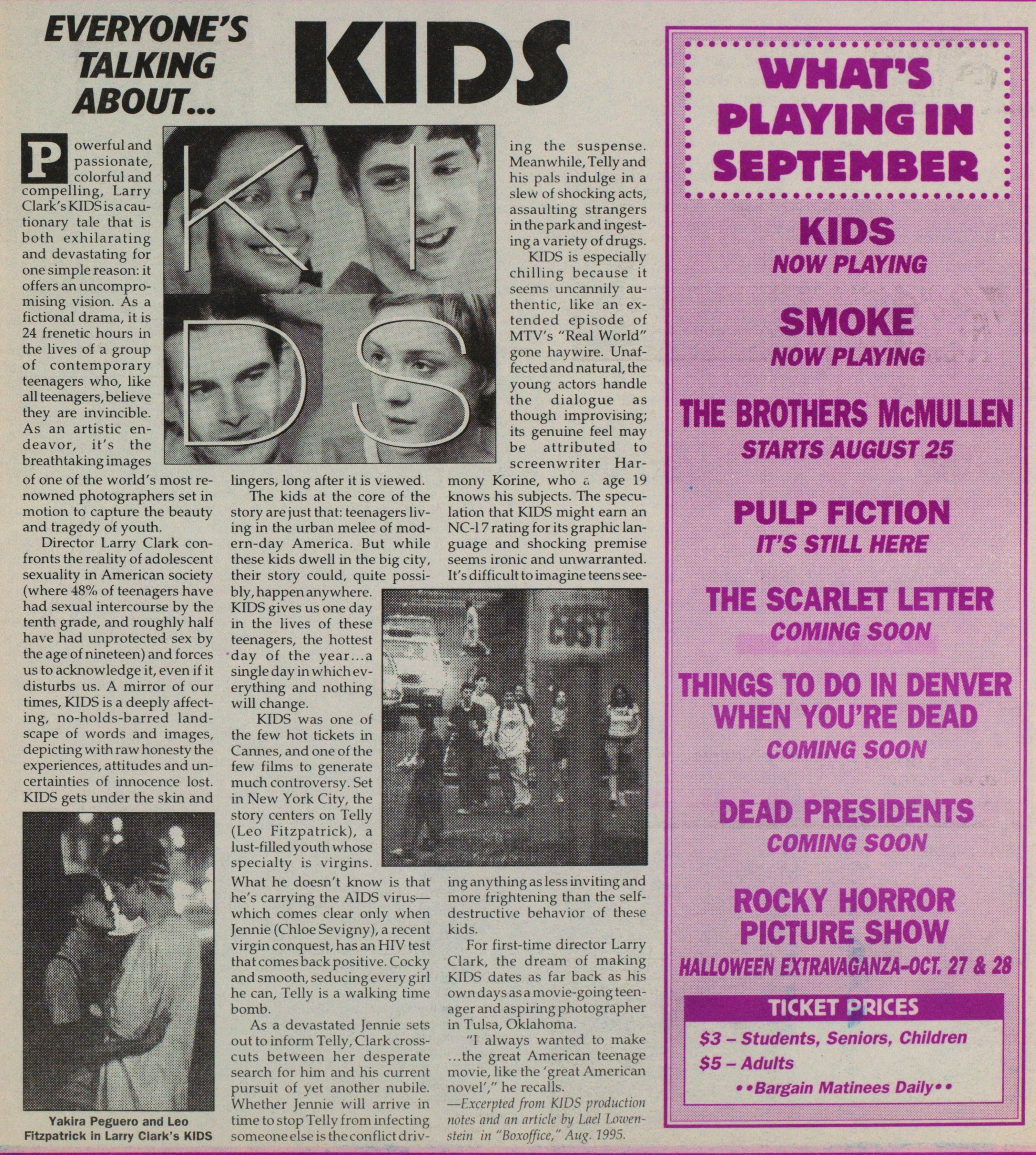 Qowerful and passionate, colorful and compelling, Larry Clark'sKIDSisacautionary tale that is both exhilarating and devastating for one simple reason: it offers an uncompromising visión. As a fictional drama, it is 24 frenetic hours in the lives of a group of contemporary teenagers who, like all teenagers, believe they are invincible. As an artistic endeavor, it's the breathtaking images I of one of the world's most renovvned photographers set in motion to capture the beauty and tragedy of youth. Director Larry Clark confronts the reality of adolescent sexuality in American society (where 48% of teenagers have had sexual intercourse by the tenth grade, and roughly half have had unprotected sex by the age of nineteen) and forces us to acknowledge it, even if it disturbs us. A mirror of our times, KIDS is a deeply affecting, no-holds-barred landscape of words and images, depicting with raw honesty the experiences, attitudes and uncertainties of innocence lost. KIDS gets under the skin and lingers, long after it is viewed. The kids at the core of the story are just that: teenagers living in the urban melee of modern-day America. But while these kids dweil in the big city, their story could, quite possi111 i bly, happen any where. KIDS gives us one day in the lives of these teenagers, the hottest day of the year...a single day in which everything and nothing will change. KIDS was one of the few hot tickets in Cannes, and one of the few films to genérate much controversy. Set in New York City, the story centers on Telly (Leo Fitzpatrick), a lust-filled youth whose specialty is virgins. What he doesn't know is that he's carrying the AIDS virus - which comes clear only when Jennie (Chloe Sevigny), a recent virgin conquest, has an HIV test that comes back positive. Cocky and smooth, seducingevery girl he can, Telly is a walking time bomb. As a devastated Jennie sets out to inform Telly, Clark crosscuts between her desperate search for him and his current pursuit of yet another nubile. Whether Jennie will arrive in time to stop Telly f rom inf ecting someone else is the conflict d ri ing the suspense. Meanwhile, Telly and his pais indulge in a slew of shocking acts, assaulting strangers in the park and ingesting a variety of drugs. KIDS is especially chilling because it seems uncannily authentic, like an extended episode of MTV's "Real World" gone haywire. Unaffected and natural, the young actors handle the dialogue as though improvising; its genuine feel may be attributed to screenwriter mony Korine, who a age 19 knows his subjects. The speculation that KIDS might earn an NC-1 7 rating for its graphic language and shocking premise seems ironie and unwarranted. It's dif f icult to imagine teens ing any thing as less inviting and more frightening than the selfdestructive behavior of these kids. For first-time director Larry Clark, the dream of making KIDS dates as far back as his own days as a movie-going teenager and aspiring photographer in Tulsa, Oklahoma. "I always wanted to make ...the great American teenage movie, like the 'great American novel'," he recalls. - Excerptfd frotn KIDS production notes and an article by Lael Loivenstein in "Boxoffice," Áug. 1995. i WHAT'S i i PLAYINGIN j j SEPTEMBER j KIDS NOW PLAYING SMOKE NOW PLAYING THE BROTHERS McMULLEN STARTS AUGUST 25 PULP FICTION n'S STILL HERE THE SCARLET LETTER I COMING SOON THINGS TO DO IN DENVER WHEN YOU'RE DEAD COMING SOON j DEAD PRESIDENTS COMING SOON i ROCKY HORROR PICTURE SHOW HALLOWEËN ÍXTRAVAGANZA-Oa 27 & 28 $3 - Students. Seniors, Children $5 - Adults Bargain Matinees Daily