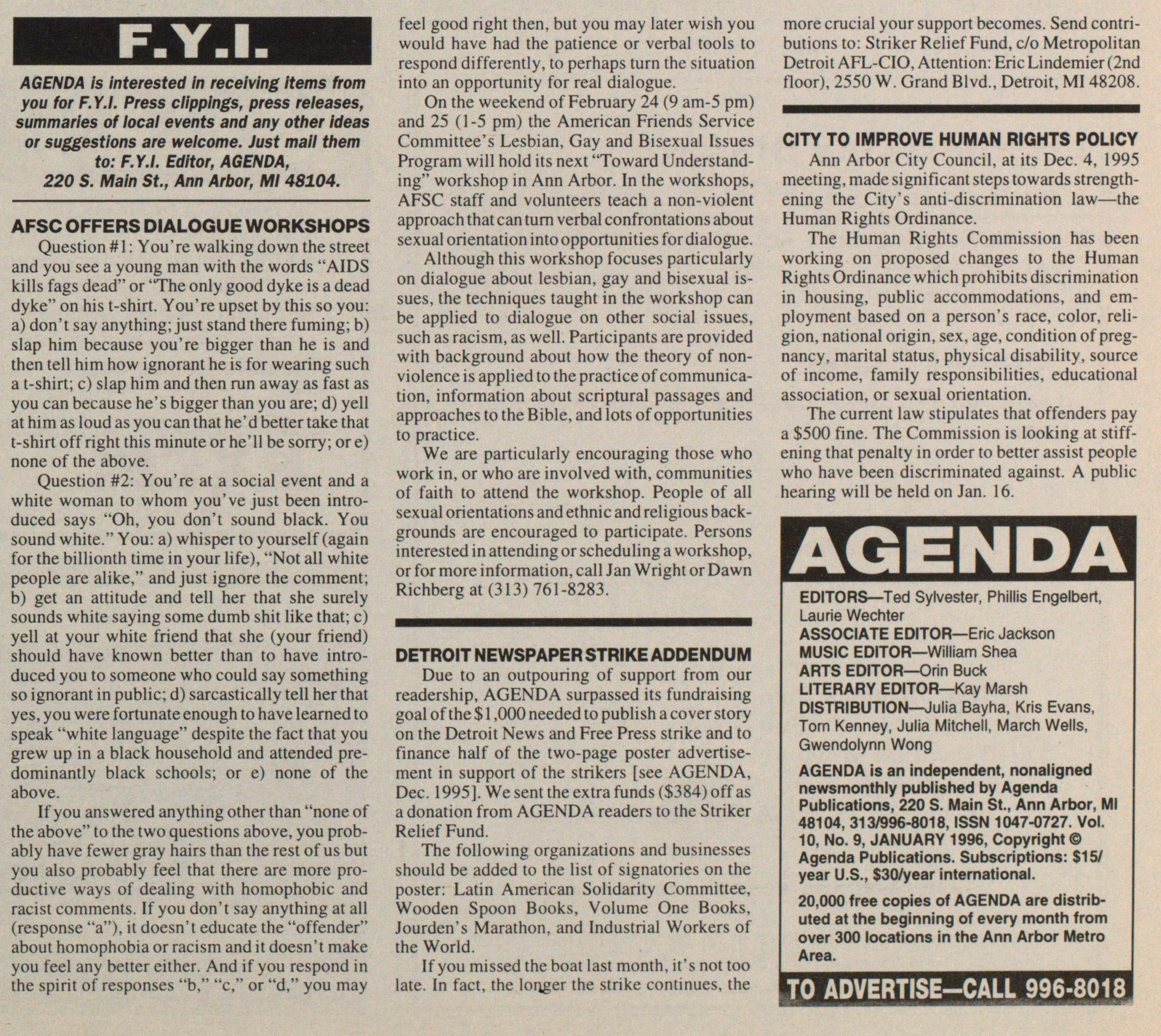 AGENDA is interested In receiving Items front you for F. Y.l. Press clippings, press releases, summarles of local events and any other Ideas or suggestions are welcome. Just malí them to: F.Y.I. Editor, AGENDA, 220 S. Main St., Ann Arbor, MI 48104. AFSC OFFERS DIALOGUE WORKSHOPS Question #1 : You' re walking down the street and you see a young man with the words "AIDS kills fags dead" or 'The only good dyke is a dead dyke" on his t-shirt. You' re upset by this so you: a) don't say anything; just stand there fuming; b) slap him because you're bigger than he is and then teil him how ignorant he is for wearing such a t-shirt; c) slap him and then run away as fast as you can because he's bigger than you are; d) yell at him as loud as you can that he'd better take that t-shirt off right this minute orhe'll be sorry; ore) none of the above. Question #2: You're at a social e vent and a white woman to whom you've just been introduced says "Oh, you don't sound black. You sound white." You: a) whisper to yourself (again for the billionth time in your life), "Not all white people are alike," and just ignore the comment; b) get an attitude and teil her that she surely sounds white saying some dumb shit like that; c) yell at your white friend that she (your friend) should have known better than to have introduced you to someone who could say something so ignorant in public; d) sarcastically teil her that yes, you were fortúnate enough to have learned to speak "white language" despite the fact that you grew up in a black household and attended predominantly black schools; or e) none of the above. If you answered anything other than "none of the above" to the two questions above, you probably have fewer gray hairs than the rest of us but you also probably feel that there are more productive ways of dealing with homophobic and racist comments. If you don't say anything at all (response "a"), it doesn't edúcate the "offender" about homophobia or racism and it doesn't make you feel any better either. And if you respond in the spirit of responses "b," "c," or "d," you may feel good right then, but you may later wish you would have had the patience or verbal tools to respond differently, to perhaps turn the situation into an opportunity for real dialogue. On the weekend of February 24 (9 am-5 pm) and 25 (1-5 pm) the American Friends Service Committee's Lesbian, Gay and Bisexual Issues Program will hold its next "Toward Understanding" workshop in Ann Arbor. In the workshops, AFSC staff and volunteers teach a non-violent approach that can turn verbal confrontations about sexual orientation into opportunities for dialogue. Although this workshop focuses particularly on dialogue about lesbian, gay and bisexual issues, the techniques taught in the workshop can be applied to dialogue on other social issues, such as racism, as well. Participants are provided with background about how the theory of nonviolence is applied to the practice of communication, information about scriptural passages and approaches to the Bible, and lots of opportunities to practice. We are particularly encouraging those who work in, or who are involved with, communities of faith to attend the workshop. People of all sexual orientations and ethnic and religious backgrounds are encouraged to particípate. Persons interested in attending or scheduling a workshop, or for more information, cali Jan Wright or Dawn Richberg at (313) 761-8283. DETROIT NEWSPAPER STRIKE ADDENDUM Due to an outpouring of support from our readership, AGENDA surpassed its fundraising goal of the $ 1 ,000 needed to publish a cover story on the Detroit News and Free Press strike and to finance half of the two-page poster advertisement in support of the strikers [see AGENDA, Dec. 1995]. We sent the extra funds ($384) off as a donation from AGENDA readers to the Striker Relief Fund. The following organizations and businesses should be added to the list of signatories on the poster: Latin American Solidarity Committee, Wooden Spoon Books, Volume One Books, Jourden's Marathon, and Industrial Workers of the World. If you missed the boat last month, it's not too late. In fact, the longer the strike continúes, the more crucial your support becomes. Send contributions to: Striker Relief Fund, co Metropolitan Detroit AFL-CIO, Attention: Eric Lindemier (2nd floor), 2550 W. Grand Blvd., Detroit, MI 48208. CITY TO IMPROVE HUMAN RIGHTS POLICY Ann Arbor City Council, at its Dec. 4, 1995 meeting, made significant steps towards strengthening the City's anti-discrimination law - the Human Rights Ordinance. The Human Rights Commission has been working on proposed changes to the Human Rights Ordinance which prohibits discrimination in housing, public accommodations, and employment based on a person's race, color, religión, national origin, sex, age, condition of pregnancy, marital status, physical disability, source of income, family responsibilities, educational association, or sexual orientation. The current law stipulates that offenders pay a $500 fine. The Commission is looking at stiffening that penalty in order to better assist people who have been discriminated against. A public hearing will be held on Jan. 16.