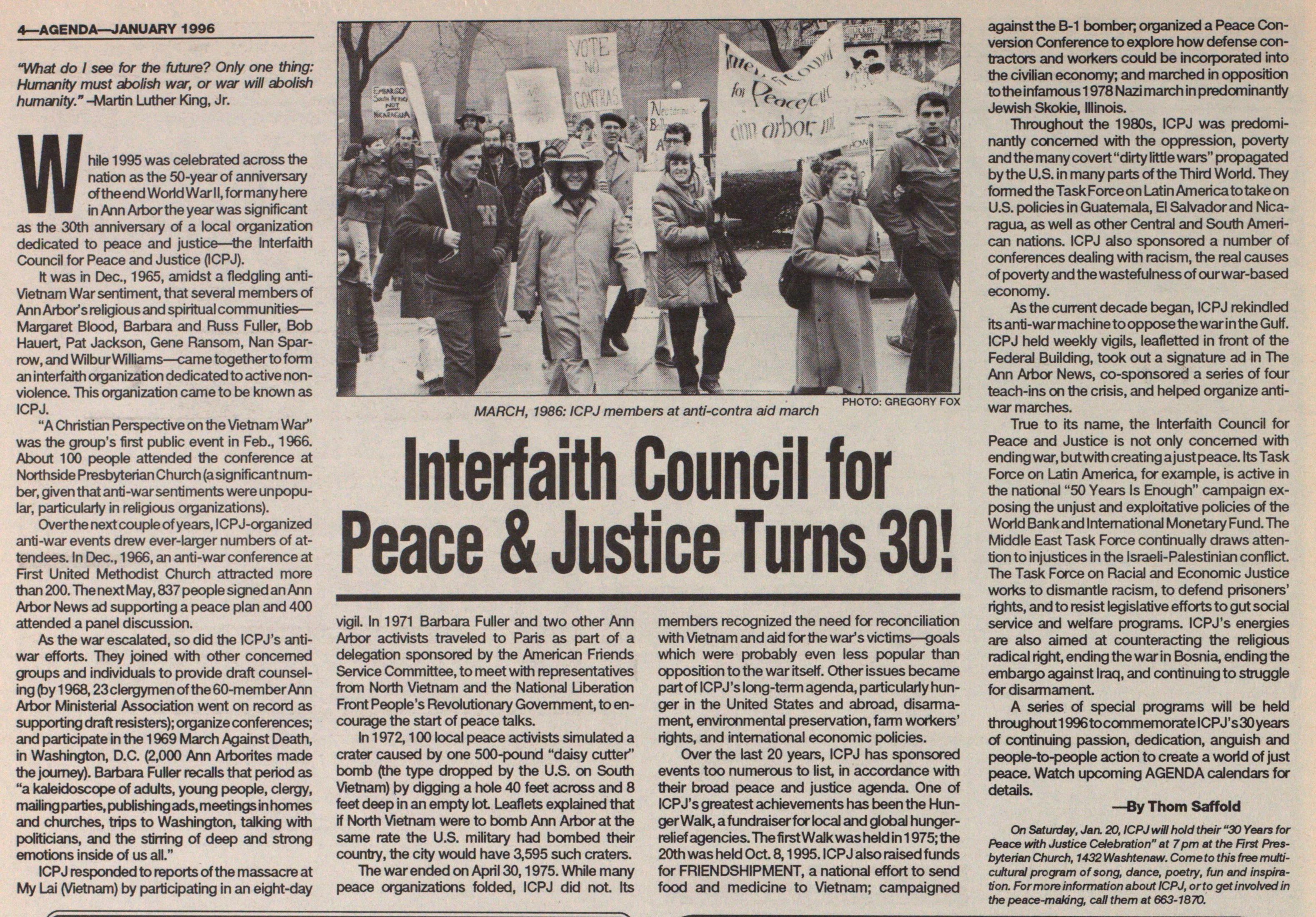 "What do I see for the future? Only one tiling: Humanity must abolish war, or war will abolish humanity." -Martin Luther King, Jr. While 1 995 was celebrated across the nation as the 50-year of anniversary oftheendWorldWarll.formanyhere in Ann Arbor the year was significant as the 30th anniversary of a local organization dedicated to peace and justice - the Interfaith Council for Peace and Justice (ICPJ). It was in Dec., 1965, amidst a fledgling antiVietnam War sentiment, that several members of Ann Arbor's religious and spiritual communities- Margaret Blood, Barbara and Russ Fuller, Bob Hauert, Pat Jackson, Gene Ransom, Nan Sparrow, and Wilbur Williams- carne togethertoform an interfaith organization dedicated to active nonviolence. This organization carne to be known as ICPJ. "A Christian Perspective on the Vietnam War" was the group's first public event in Feb., 1 966. About 100 people attended the conference at Northside Presbyterian Church (a significant number, given that anti-war sentiments were unpopular, particularty in religious organizations). Overthenextcoupleofyears, ICPJ-organized anti-war events drew ever-larger numbers of attendees. In Dec, 1 966, an anti-war conference at First United Methodist Church attracted more tnan 200. The next May, 837 people signed an Ann Arbor News ad supporting a peace plan and 400 attended a panel discussion. As the war escalated, so did the ICPJ 's antiwar efforts. They joined with other concemed groups and individuals to provide draft counseling (by 1 968, 23clergymen of the 60-member Ann Arbor Ministerial Association went on record as supporting draft résisters); organize conferences; and particípate in the 1 969 March Against Death, in Washington, D.C. (2,000 Ann Arborites made the joumey). Barbara Fuller recalls that period as "a kaleidoscope of adults, young people, clergy, mailing partes, publishing ads, meetings in homes and churches, trips to Washington, talking with politicians, and the stirring of deep and strong emotions nside of us all." ICPJ responded to reports of the massacre at My Lai (Vietnam) by partcipating in an eight-day vigil. In 1 971 Barbara Fuller and two other Ann Arbor actlvists traveled to Paris as part of a delegation sponsored by the American Friends Service Committee, to meet with representatives from Nortri Vietnam and the National Liberation Front People's Revolutionary Government, to encourage the start of peace talks. In 1 972, 1 00 local peace activists simulated a cráter caused by one 500-pound "daisy cutter" bomb (the type dropped by the U.S. on South Vietnam) by digging a hole 40 feet across and 8 feet deep in an empty lot Leaflets explained that if North Vietnam were to bomb Ann Arbor at the same rate the U.S. military had bombed tneir country, the city would have 3,595 such craters. The warended on April 30, 1 975. While many peace organizations folded, ICPJ did not. lts members recognized the need for reconciliation with Vietnam and aid for the war's victims - goals which were probably even less popular than opposition to the war itsetf. Other issues became part of ICPJ 's long-term agenda, particularly hunger in the United States and abroad, disarmament, environmental preservation, farm workers' rights, and international economie policies. Over the last 20 years, ICPJ has sponsored events too numerous to list, in accordance with their broad peace and justice agenda. One of ICPJ's greatest achievements has been the Hunger Walk, a fundraiser for kxal and global hungerrelief agencies. The firstWalk was held n1975;the 20th was held Oct. 8, 1 995. ICPJ also raised f unds for FRIENDSHIPMENT, a national effort to send food and medicine to Vietnam; campaigned against the B-1 bomben organized a Peace Conversión Conference to explore how defense contractors and workers could be incorporated into the civilian economy; and marched n opposition totheinfamous 1 978 Nazi maren in predominantly Jewish Skokie, Illinois. Throughout the 1980s, ICPJ was predominantly concemed with the oppression, poverty and the many covert "dirty littJe wars" propagated by the U.S. in many parts of the Third World. They formed the Task Force on Latin America to take on U.S. pol i cíes in Guatemala, El Salvador and Nicaragua, as well as other Central and South American natkxis. ICPJ also sponsored a number of conferences dealing with racism, the real causes of poverty and the wastefulness of our war-based economy. As the current decade began, ICPJ rekindled its anti-war machine to oppose the war in the Gulf. ICPJ held weekly vigils, leafletted in front of the Federal Building, took out a signature ad in The Ann Arbor News, co-sponsored a series of four teach-ins on the crisis, and helped organize antiwar marches. True to its name, the Interfaith Council for Peace and Justice is not only concemed with endingwar, butwithcreatingajust peace. lts Task Force on Latin America, for example, is active in the national "50 Years Is Enough" campaign exposing the unjust and explortative policies of the World Bank and International Monetary Fund.The Middle East Task Force continually draws attention to injustices in the Israeli-Palestinian conflict. The Task Force on Racial and Economie Justice works to dismantle racism, to defend prisoners' rights, and to resist legislati ve efforts to gut social service and welfare programs. ICPJ's energies are also aimed at counteracting the religious radical right, ending the war in Bosnia, ending the embargo against Iraq, and continuing to struggle for disarmament A series of special programs will be held throughout1996tocommemoratelCPJ's30years of continuing passion, dedication, anguish and people-to-people action to créate a worid of just peace. Watch upcoming AGENDA calendare for details. On Saturday, Jan. 20, ICPJ wül hold their "30 Years lor Peace with Justice Celebration" at 7pm at the First Presbyterian Church, 1432 Washtenaw. Come ío tHs f ree multicultural pre gram of song, dance, poetry, fun and nspiraü'on. Formoreinformation about ICPJ, orto getinvohed in the peace-mahng, cali them at 663-1870.