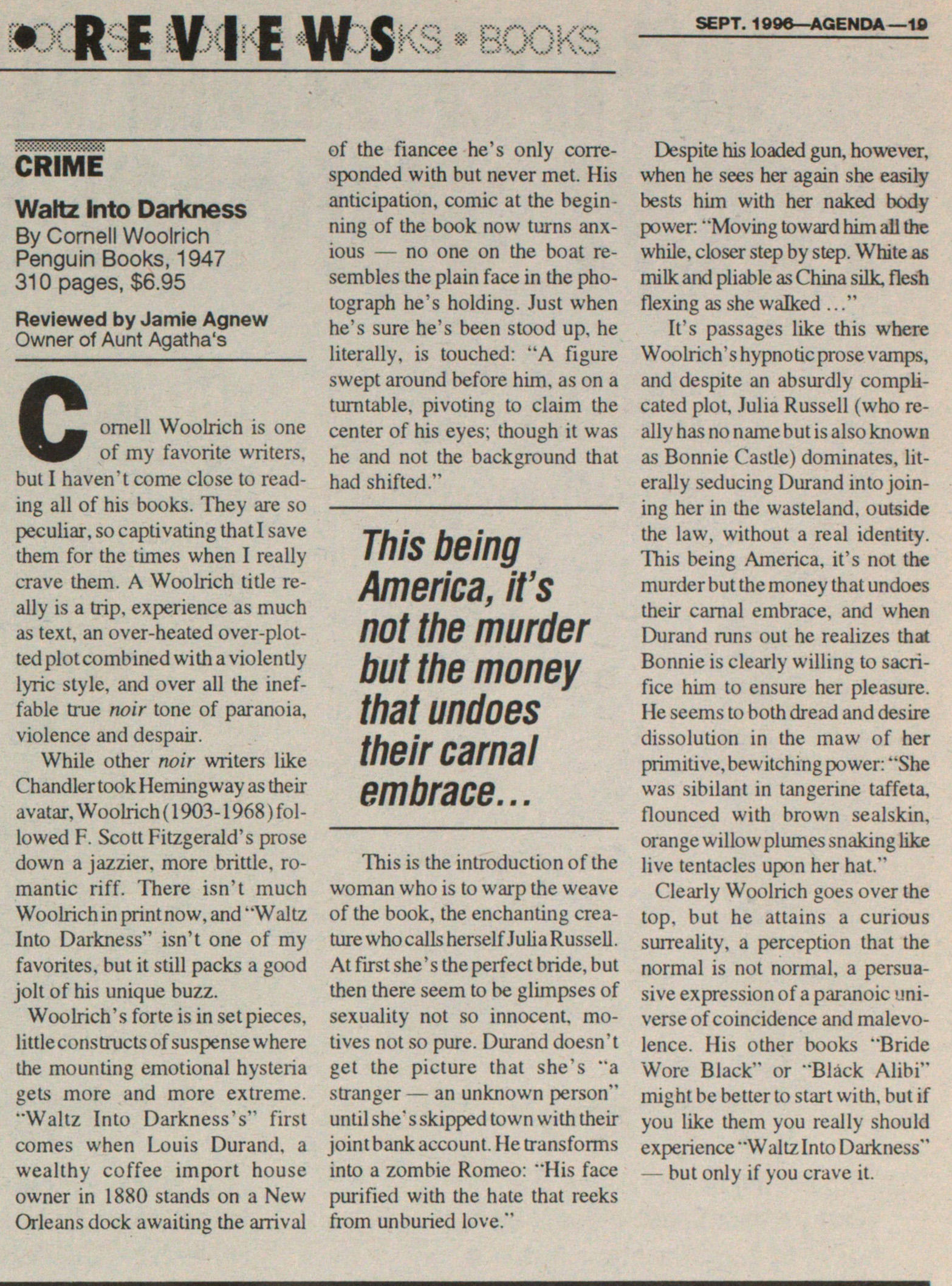 Waltz Into Darkness By Comell Woolrich Penguin Books, 1947 310 pages, $6.95 - ornell Woolrich is one F of my favorite writcrs. but I haven't come close to reading all of his books. They are so peculiar, so captivating that I save them for the times when I really crave them. A Woolrich title really is a trip, experience as much as text, an over-heated over-plotted plot combined with a violently lyric style, and over all the ineffable true noir tone of paranoia, violence and despair. While other noir writers like Chandler took Hemingway as their avatar. Woolrich ( 1 1 968 ) followed F. Scott Fitzgerald's prose down a jazzier. more brittle, romantic riff. There isn't much Woolrich in print now, and "'Waltz Into Darkness" isn't one of my favorites. but it still packs a good jolt of his unique buzz. Woolrich's forte is in setpieces. little constructs of suspense where the mounting emotional hysteria gets more and more extreme. "Waltz Into Darkness 's" first comes when Louis Durand, a wealthy coffee import house owner in 1880 stands on a New Orleans doek awaiting the arrival of the fiancee he's only corresponded with but never met. His anticipation, comic at the beginning of the book now turns anxious - no one on the boat resembles the plain face in the photograph he's holding. Just when he's sure he's been stood up, he literally, is touched: "A figure swept around before him. as on a tumtable. pivoting to claim the center of his eyes; though it was he and not the background that had shifted." Th is being America, it's not the murder butthemoney thatundoes their carnal embrace... This is the introduction of the woman who is to warp the weave of the book, the enchanting creature who calis herself JuliaRussell. At first she's the perfect bride, but then there seem to be glimpses of sexuality not so innocent, motives not so pure. Durand doesn't get the picture that she's "a stranger - an unknown person" until she" s skipped town with their joint bank account. He transforms into a zombie Romeo: "His face purified with the hate that reeks from unburied love." Despite his loaded gun, however, when he sees her again she easily bests him with her naked body power "Moving toward him all the while. closer step by step. White as mi Ík and pliable as China silk, flesh flexing as she waDced ..." It's passages like this where Woolrich's hypnoticprose vamps, and despite an absurdly complicated plot, Julia Russell (who really has no name but is also known as Bonnie Castle) dominates, literally seducing Durand into joining her in the wasteland, outside the law, without a real identity. This being America, it's not the murder but the money that undoes their carnal embrace, and when Durand runs out he realizes that Bonnie is clearly willing to sacrifice him to ensure her pleasure. He seems to both dread and desire dissolution in the maw of her primitive.bewitchingpower: "She was sibilant in tangerine taffeta, flounced with brown sealskin, orange willow plumes snaking like live tentacles upon her hat." Clearly Woolrich goes over the top. but he attains a curious surreality, a perception that the normal is not normal, a persuasive expression of a paranoic universe of coincidence and malevolence. His other books "Bride Wore Black" or "Black Alibi" might be better to start with, but if you like them you really should experience "Waltz Into Darkness" - but only if you crave it.