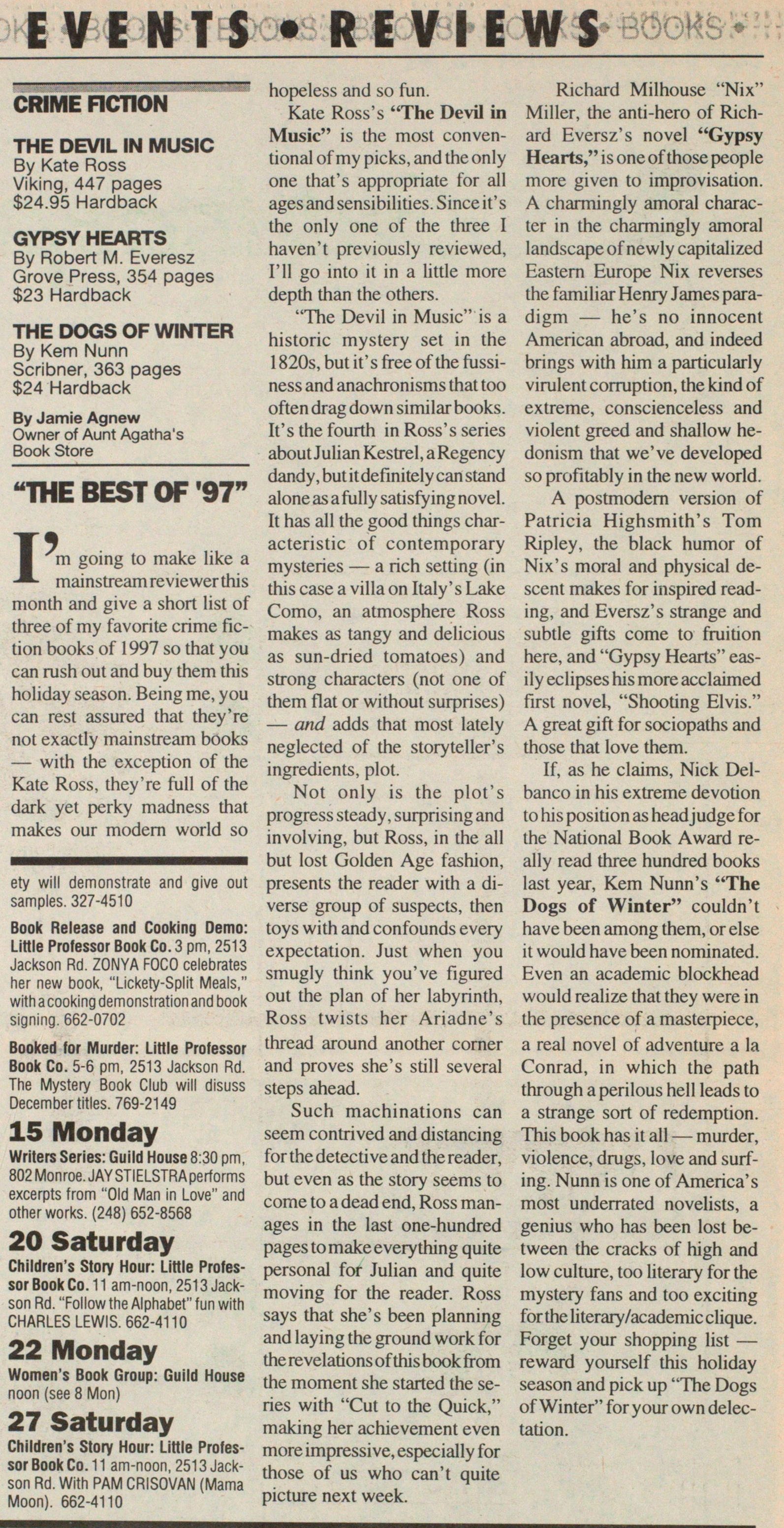 THE DEVIL IN MUSIC By Kate Ross Viking, 447 pages $24.95 Hardback GYPSY HEARTS By Robert M. Everesz Grove Press, 354 pages $23 Hardback THE DOGS OF WINTER By Kern Nunn Scribner, 363 pages $24 Hardback By Jamie Agnew Owner of Aunt Agatha's Book Store "THE BEST OF '97 Im going to make like a mainstream reviewer this month and give a short list of three of my favorite crime fiction books of 1997 so that you can rush out and buy them this holiday season. Being me, you can rest assured that they're not exactly mainstream books - with the exception of the Kate Ross, they're full of the dark yet perky madness that makes our modern world so hopeless and so fun. Kate Ross's "The Devil n Music" is the most conventional of my picks, and the only one that's appropriate for all ages and sensibilities. Since it's the only one of the three I haven't previously reviewed, I'll go into it in a little more depth than the others. "The Devil in Music" is a historie mystery set in the 1820s, but it's free of the fussiness and anachronisms that too often drag down similar books. It's the fourth in Ross's series about Julián Kestrel, aRegency dandy , but it definitely can stand alone as a fully satisfying novel. It has all the good things characteristic of contemporary mysteries - a rich setting (in this case a villa on Italy's Lake Como, an atmosphere Ross makes as tangy and delicious as sun-dried tomatoes) and strong characters (not one of them flat or without surprises) - and adds that most lately neglected of the storyteller' s ingredients, plot. Not only is the plot's progress steady , surprising and involving, but Ross, in the all but lost Golden Age fashion, presents the reader with a diverse group of suspects, then toys with and confounds every expectation. Just when you smugly think you've figured out the plan of her labyrinth, Ross twists her Ariadne's thread around another corner and proves she's still several steps ahead. Such machinations can seem contrived and distancing for the detective and the reader, but even as the story seems to come to a dead end, Ross manages in the last one-hundred pages to make every thing quite personal for Julián and quite moving for the reader. Ross says that she's been planning and laying the ground work for the revelations of this book from the moment she started the series with "Cut to the Quick," making her achievement even more impressi ve, especially for those of us who can't quite picture next week. Richard Milhouse "Nix" Miller, the anti-hero of Richard Eversz's novel "Gypsy Hearts," is one of those people more given to improvisation. A charmingly amoral character in the charmingly amoral landscape of newly capitalized Eastern Europe Nix reverses the familiar Henry James paradigm - he's no innocent American abroad, and indeed brings with him a particularly virulent corruption, the kind of extreme, conscienceless and violent greed and shallow hedonism that we've developed so profitably in the new world. A postmodern version of Patricia Highsmith's Torn Ripley, the black humor of Nix's moral and physica! descent makes for inspired reading, and Eversz's strange and subtle gifts come to fruition here, and "Gypsy Hearts" easily eclipses his more acclaimed first novel, "Shooting Elvis." A great gift for sociopaths and those that love them. If, as he claims, Nick Delbanco in his extreme devotion to his position as headjudge for the National Book Award really read three hundred books last year, Kern Nunn's "The Dogs of Winter" couldn't have been among them, or else it would have been nominated. Even an academie blockhead would realize that they were in the presence of a masterpiece, a real novel of adventure a la Conrad, in which the path through a perilous heil leads to a strange sort of redemption. This book has it all - murder, violence, drugs, love and surfing. Nunn is one of America' s most underrated novelists, a genius who has been lost between the cracks of high and low culture, too literary for the mystery fans and too exciting forthe literaryacademic clique. Forget your shopping list - reward yourself this holiday season and piek up "The Dogs of Winter" for your own delectation.