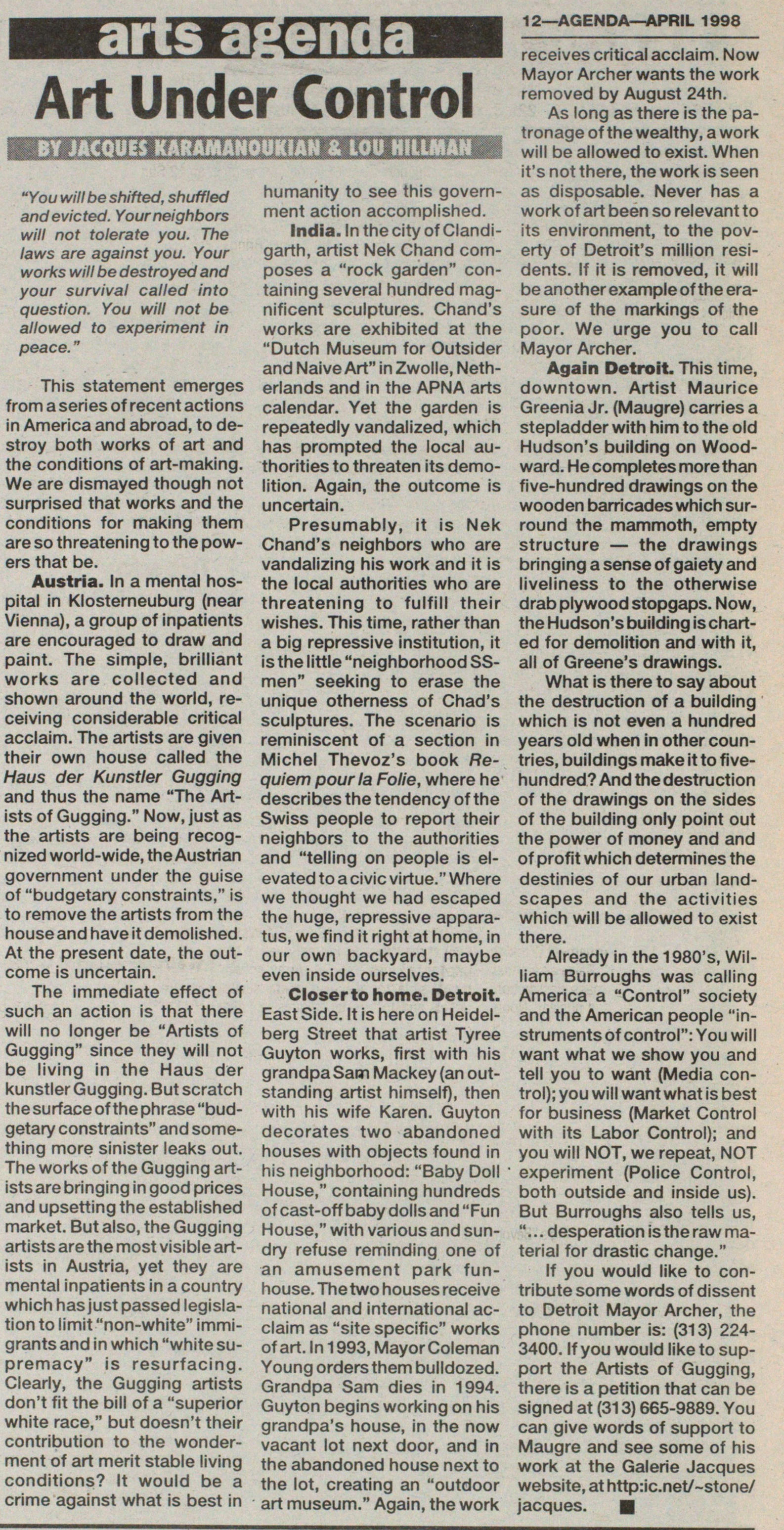 "You will be shifted, shuffled andevicted. Yourneighbors will not tolérate you. The laws are against you. Your works will be destroyed and your survival called into question. You will not be allowed to experiment in peace. " This statement emerges f rom a series of recent actions in America and abroad, to destroy both works of art and the conditions of art-making. We are dismayed though not surprised that works and the conditions for making them are so threatening to the powers that be. Austria. In a mental hospital in Klosterneuburg (near Vienna), a group of inpatients are encouraged to draw and paint. The simple, brilliant works are collected and shown around the world, receiving considerable critical acclaim. The artists are given their own house called the Haus der Kunstier Gugging and thus the name "The Artists of Gugging." Now, just as the artists are being recognized world-wide, the Austrian government under the guise of "budgetary constraints," is to remove the artists from the house and have it demolished. At the present date, the outcome is uncertain. The immediate effect of such an action is that there will no longer be "Artists of Gugging" since they will not be living in the Haus der kunstier Gugging. Butscratch the surface of the phrase "budgetary constraints" and something more sinister leaks out. The works of the Gugging artists are bringing in good prices and upsetting the established market. But also, the Gugging artists are the most visible artists in Austria, yet they are mental inpatients in a country which has just passed legislation to limit "non-white" immigrants and in which "white supremacy" is resurfacing. Clearly, the Gugging artists don't fit the bill of a "superior white race," but doesn't their contribution to the wonderment of art merit stable living conditions? It would be a crime against what is best in humanity to see this government action accomplished. India. In the city of Clandigarth, artist Nek Chand composes a "rock garden" containing several hundred magnificent sculptures. Chand's works are exhibited at the "Dutch Museum for Outsider and Naive Art" in Zwolle, Netherlands and in the APNA arts calendar. Yet the garden is repeatedly vandalized, which has prompted the local authorities to threaten its demolition. Again, the outcome is uncertain. Presumably, it is Nek Chand's neighbors who are vandalizing his work and it is the local authorities who are threatening to fulfill their wishes. This time, rather than a big repressive institution, it is the little "neighborhood SSmen" seeking to erase the unique othemess of Chad's sculptures. The scenario is reminiscent of a section in Michel Thevoz's book Requiem pourla Folie, where he describes the tendency of the Swiss people to report their neighbors to the authorities and "telling on people is elevated to a civic virtue." Where we thought we had escaped the huge, repressive apparatus, we find it right at home, in our own backyard, maybe even inside ourselves. Closerto home. Detroit. East Side. It is here on Heidelberg Street that artist Tyree Guyton works, first with his grandpa Sam Mackey (an outstanding artist himself), then with his wife Karen. Guyton decorates two abandoned houses with objects found in his neighborhood: "Baby Doll House," containing hundreds of cast-off baby dolls and "Fun House," with various and sundry refuse reminding one of an amusement park funhouse. The two houses receive national and international acclaim as "site specific" works of art. In 1 993, Mayor Coleman Young orders them bul Idozed. Grandpa Sam dies in 1994. Guyton begins working on his grandpa's house, in the now vacant lot next door, and in the abandoned house next to the lot, creating an "outdoor art museum." Again, the work receives critical acclaim. Now Mayor Archer wants the work removed by August 24th. As long as there is the patronage of the wealthy, a work will be allowed to exist. When it's not there, the work s seen as disposable. Never has a work of art been so relevant to its environment, to the poverty of Detroit's million residents. If it is removed, it will be another example of the erasure of the markings of the poor. We urge you to cali Mayor Archer. Again Detroit. This time, downtown. Artist Maurice Greenia Jr. (Maugre) carries a stepladder with him to the old Hudson's building on Woodward. He completes more than five-hundred drawings on the wooden barricades which surround the mammoth, empty structure - the drawings bringing a sense of gaiety and liveliness to the otherwise drab plywood stopgaps. Now, the Hudson's building is charted for demolition and with it, all of Greene's drawings. What is there to say about the destruction of a building which is not even a hundred years old when in other countries, buildings make it to fivehundred? And the destruction of the drawings on the sides of the building only point out the power of money and and of profit which determines the destinies of our urban landscapes and the activities which will be allowed to exist there. Alreadyinthe1980's, William Burroughs was calling America a "Control" society and the American people "instruments of control": You will want what we show you and teil you to want (Media control); you will want what is best for business (Market Control with its Labor Control); and you will NOT, we repeat, NOT ' experiment (Pólice Control, both outside and inside us). But Burroughs also tells us, "... desperation is the raw material for drastic change." If you would like to contribute some words of dissent to Detroit Mayor Archer, the phone number is: (313) 2243400. If you would like to support the Artists of Gugging, there is a petition that can be signed at (31 3) 665-9889. You can give words of support to Maugre and see some of his work at the Galerie Jacques website, at http:ic.netstone jacques. ■ MFTi HFTn 1 1 ' FTI