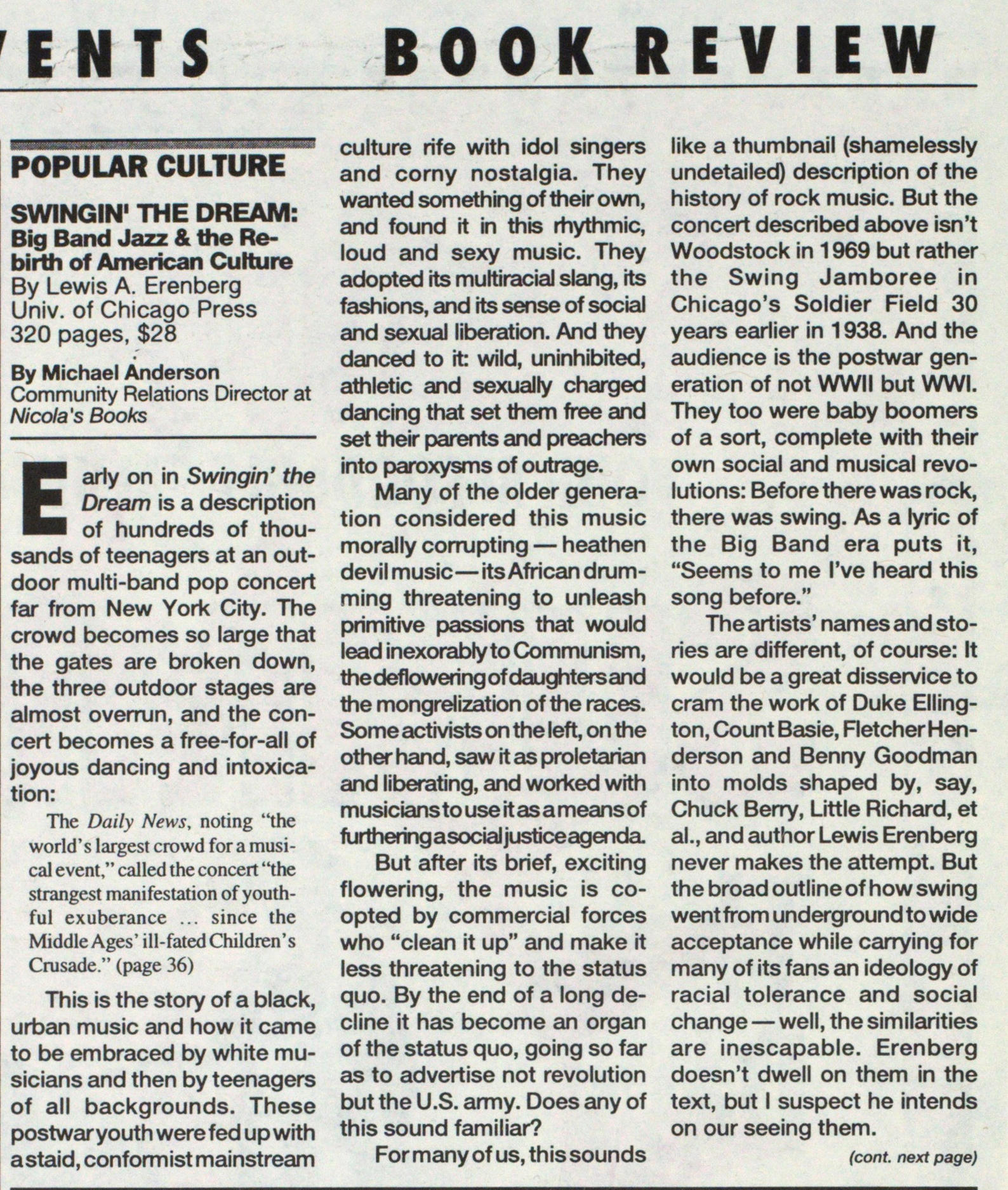 SWINGIN' THE DREAM: Big Band Jazz & the Rebirth of American Culture By Lewis A. Erenberg Univ. of Chicago Press 320 pages, $28 Communrty Relations Director at Nicola's Books Eaiiy on in Swingin' the Dream is a description of hundreds of thousands of teenagers at an outdoor multi-band pop concert far from New York City. The crowd becomes so large that the gates are braken down, the three outdoor stages are almost overrun, and the concert becomes a free-for-all of joyous dancing and intoxication: The Daily News, noting "the world's largest crowd for a musical event," called the concert "the strangest manifestation of youthful exuberance ... since the Middle Ages' 11-fatedChildren's Crusade." (page 36) This is the story of a black, urban music and how it carne to be embraced by white musicians and then by teenagers of all backgrounds. These postwaryouth were fed up with a staid , conform ist mainstream culture rife with idol singers and corny nostalgia. They wanted something of theirown, and found it n this rhythmic, loud and sexy music. They adopted its multiracial slang, its fashions, and its sense of social and sexual liberation. And they danced to it wild, uninhibitcd, athletic and sexually charged dancing that set them free and set their parents and preachers into paroxysms of outrage. Many of the older generation considered this music morally comjpting - heathen devil music - its African drumming threatening to unleash primitive passions that would lead inexorably to Communism, thedefloweringofdaughtersand the mongrelization of the races. Some activists on the left, on the other hand, saw it as proletarian and liberating, and worked with musicians to use it as a means of furtheringasocialjustice agenda But after its brief, exciting flowering, the music is coopted by commercial forces who "clean it up" and make it less threatening to the status quo. By the end of a long decline it has become an organ of the status quo, going so far as to advertise not revolution but the U.S. army. Does any of this sound familiar? For many of us, this sounds like a thumbnail (shamelessly undetailed) description of the history of rock music. But the concert described above isn't Woodstock in 1 969 but rather the Swing Jamboree in Chicago's Soldier Field 30 years eaiiier in 1 938. And the audience is the postwar generation of not WWII but WWI. They too were baby boomers of a sort, complete with their own social and musical revolutions: Bef ore there was rock, there was swing. As a lyric of the Big Band era puts it, "Seems to me l've heard this song before." The artists' names and stories are different, of course: It would be a great disservice to cram the work of Duke Ellington, Count Basie, FletcherHenderson and Benny Goodman into molds shaped by, say, Chuck Berry, Little Richard, et al., and author Lewis Erenberg never makes the attempt. But the broad outline of how swing went from underground towide acceptance while carrying for many of its fans an ideology of racial tolerance and social change - well, the similarities are inescapable. Erenberg doesn't dweil on them in the text, but I suspect he intends on our seeing them. (cont next page) (trom previous page) Erenberg makes it clearthat Swingin' the Dream is not a musical history. Rather, it's a history of a time in the 1 930s when music was used as an inspiration and rallying cry for social change. Musicians and critics are heard from, but no more often than the youthful jitterbuggers who thrilled to the tunes and times from the dance floor rather than the bandstand. There have been a number of such books about sixties rock (Greil Marcus still makes a living this way). But as Erenberg rightly laments, there has been relatively little said about the social impact of eariier music such as swing. In many studies of jazz as music, swing is quickly pass ed over as the toocommercial music that happened between Louis Armstrong and bebop. Swing, from this perspective, is the creaky old regime rightly toppled by the bop revolutionaries. It is described priman ly in terms of what bop was not: formal istic, constricting, and pandering to mainstream dullards. Such assessments turn out to be unfair and incomplete. What if all you knew about rock 'n' roll were descriptions of bloated corporate bands in the 1 970s, as written by fans of the Sex Pistols and other punks? Or if the only descriptions of Muhammad AH were of his last years in the ring? Similarly, swing was once lean, hungry, vital in both sensesof the word, and utterly captivating. Erenberg presents some needed perspective on its formation, heyday and lasting importance as well as on its decline. The book is not perfect: A few portions are as dry as an academie Journal (Erenberg is a professor of history at Loyola University of Chicago). Friends with expertise in music and history beyond my own have noted a few minor factual errors as well. Okay, but what Erenberg has succeeded in doing for me is to offer a new way of seeing an era. He documents it brimming with excitement, and with social and musical relevance that I had no dea was there. Maybe l'm ignorant. Maybe every body else knows this stuff. For me it was an (and ear) opener of the first order. ■