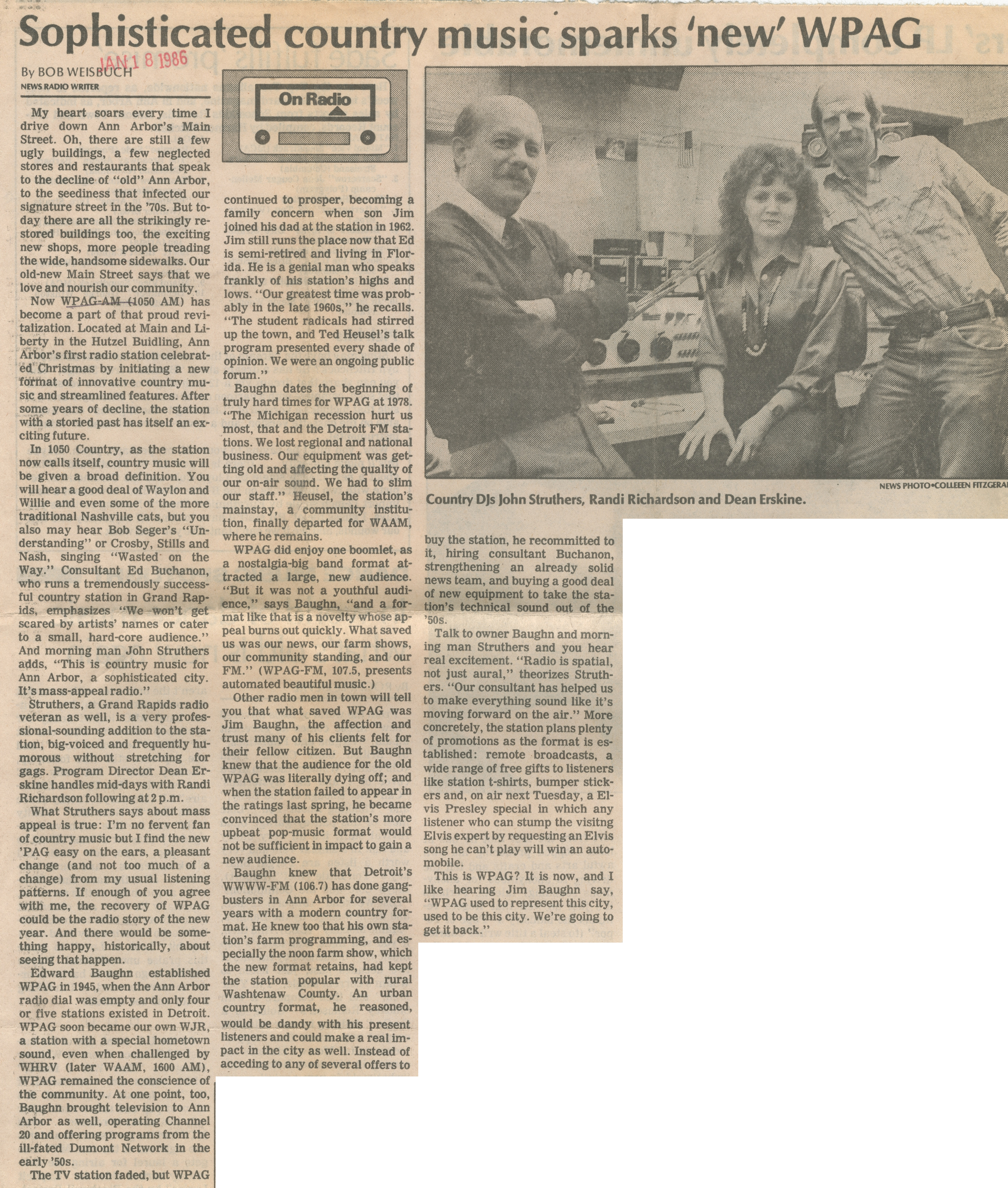 My heart soars every time I drive down Ann Arbor's Main Street. Oh, there are still a few ugly buildings, a few neglected stores and restaurants that speak to the decline of "old" Ann Arbor, to the seediness that infected our signature street in the '70s. But today there are all the strikingly restored buildings too, the exciting new shops, more people treading the wide, handsome sidewalks. Our old-new Main Street says that we love and nourish our community.

Now WPAG-AM 41050 AM) has become a part of that proud revitalization. Located at Main and Liberty in the Hutzel Building, Ann Arbor's first radio station celebrated' Christmas by initiating a new format of innovative country music and streamlined features. After some years of decline, the station with a storied past has itself an exciting future.

In 1050 Country, as the station now calls itself, country music will be given a broad definition. You will hear a good deal of Waylon and Willie and even some of the more traditional Nashville cats, but you also may hear Bob Seger's “Understanding” or Crosby, Stills and Nash, singing “Wasted on the Way." Consultant Ed Buchanon, who runs a tremendously successful country station in Grand Rapids, emphasizes "We won't get scared by artists' names or cater to a small, hard-core audience." And morning man John Struthers adds, “This is country music for Ann Arbor, a sophisticated city. It's mass-appeal radio."

Struthers, a Grand Rapids radio veteran as well, is a very professional-sounding addition to the station, big-voiced and frequently humorous without stretching for gags. Program Director Dean Erskine handles mid-days with Randi Richardson following at 2p.m.

What Struthers says about mass appeal is true: I'm no fervent fan of country music but I find the new 'PAG easy on the ears, a pleasant change (and not too much of a change) from my usual listening patterns. If enough of you agree with me, the recovery of WPAG could be the radio story of the new year. And there would be something happy, historically, about seeing that happen.

Edward Baughn established WPAG in 1945, when the Ann Arbor radio dial was empty and only four or five stations existed in Detroit. WPAG soon became our own WJR, a station with a special hometown sound, even when challenged by WHRV (later WAAM, 1600 AM), WPAG remained the conscience of the community. At one point, too, Baughn brought television to Ann Arbor as well, operating Channel 20 and offering programs from the ill-fated Dumont Network in the early '50s.

The TV station faded, but WPAG continued to prosper, becoming a family concern when son Jim joined his dad at the station in 1962. Jim still runs the place now that Ed is semi-retired and living in Florida. He is a genial man who speaks frankly of his station's highs and lows. "Our greatest time was probably in the late 1960s,” he recalls. “The student radicals had stirred up the town, and Ted Heusel's talk program presented every shade of opinion. We were an ongoing public forum."

Baughn dates the beginning of truly hard times for WPAG at 1978. "The Michigan recession hurt us most, that and the Detroit FM stations. We lost regional and national business. Our equipment was getting old and affecting the quality of our on-air sound. We had to slim our staff.” Heusel, the station's mainstay, a community institution, finally departed for WAAM, where he remains.

WPAG did enjoy one boomlet, as a nostalgia-big band format attracted a large, new audience. “But it was not a youthful audience,” says Baughn, “and a format like that is a novelty whose appeal burns out quickly. What saved us was our news, our farm shows, our community standing, and our FM.” (WPAG-FM, 107.5, presents automated beautiful music.)

Other radio men in town will tell you that what saved WPAG was Jim Baughn, the affection and trust many of his clients felt for their fellow citizen. But Baughn knew that the audience for the old WPAG was literally dying off; and when the station failed to appear in the ratings last spring, he became convinced that the station's more upbeat pop-music format would not be sufficient in impact to gain a new audience.

Baughn knew that Detroit's WWWW-FM (106.7) has done gangbusters in Ann Arbor for several years with a modern country format. He knew too that his own station's farm programming, and especially the noon farm show, which the new format retains, had kept the station popular with rural Washtenaw County. An urban country format, he reasoned, would be dandy with his present. listeners and could make a real impact in the city as well. Instead of acceding to any of several offers to buy the station, he recommitted to it, hiring consultant Buchanon, strengthening' an already solid news team, and buying a good deal of new equipment to take the station's technical sound out of the '50s.

Talk to owner Baughn and morning man Struthers and you hear real excitement. "Radio is spatial, not just aural,” theorizes Struthers. "Our consultant has helped us to make everything sound like it's moving forward on the air.” More concretely, the station plans plenty of promotions as the format is established: remote broadcasts, a wide range of free gifts to listeners like station t-shirts, bumper stickers and, on air next Tuesday, a Elvis Presley special in which any listener who can stump the visiting Elvis expert by requesting an Elvis song he can't play will win an automobile.

This is WPAG? It is now, and I like hearing Jim Baughn say, "WPAG used to represent this city, used to be this city. We're going to get it back."