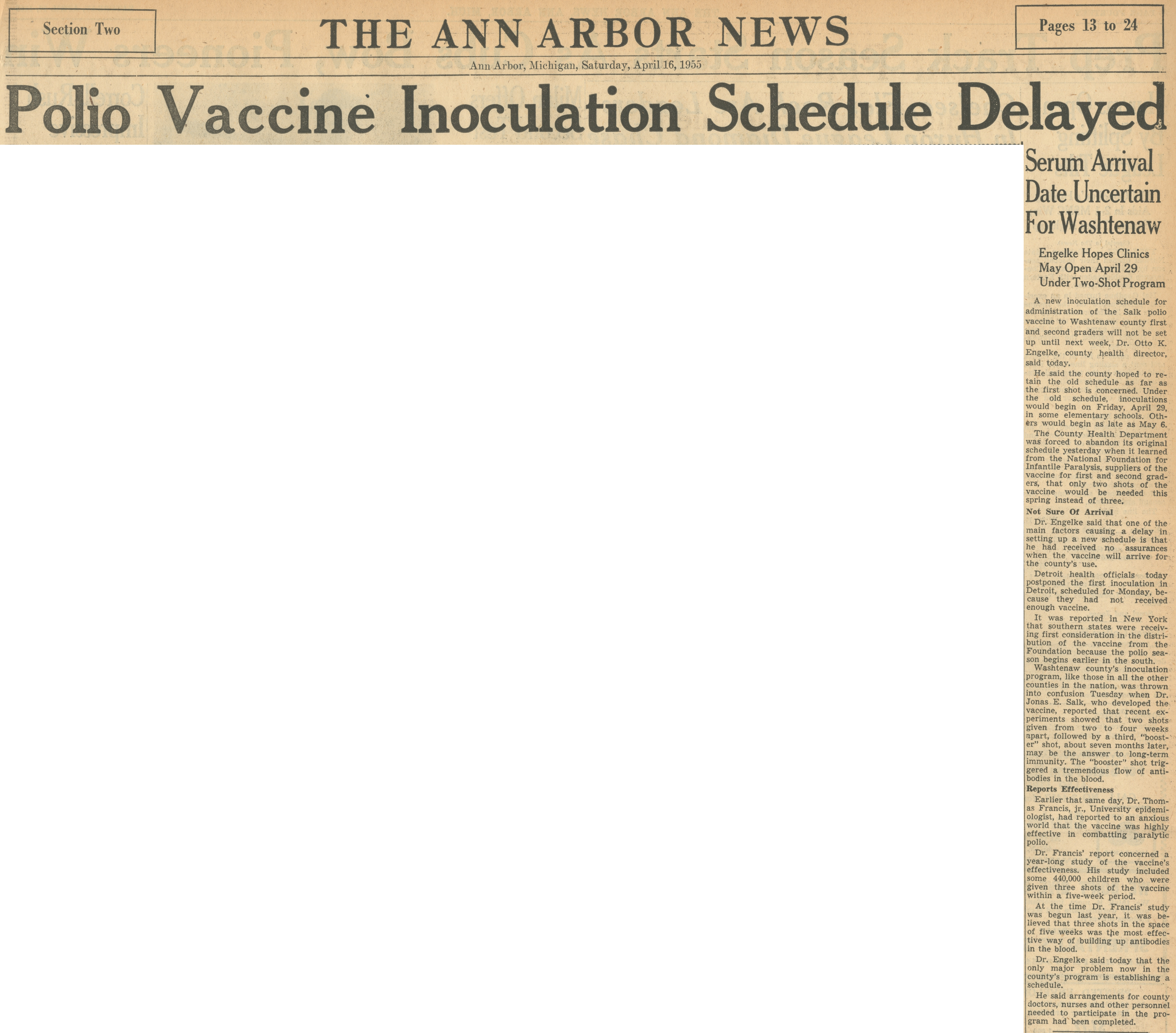 ﻿THE ANN ARBOR NEWS<br><br>Ann Arbor, Michigan, Saturday, April 16,1955<br><br>Polio Vaccine Inoculation Schedule Delayed<br><br>Serum Arrival Date Uncertain For Washtenaw<br><br>Engelke Hopes Clinics May Open April 29 Under Two-Shot Program<br><br>A new inoculation schedule for administration of the Salk polio vaccine to Washtenaw county first and second graders will not be set up until next week, Dr. Otto K. Engelke, county health director, said today.<br><br>He said the county hoped to retain the old schedule as far as the first shot is concerned. Under the old schedule, inoculations would begin on Friday, April 29, in some elementary schools. Others would begin as late as May 6.<br><br>The County Health Department was forced to abandon its original schedule yesterday when it learned from the National Foundation for Infantile Paralysis, suppliers of the vaccine for first and second graders, that only two shots of the vaccine would be needed this spring instead of three.<br><br>Not Sure Of Arrival<br><br>Dr. Engelke said that one of the main factors causing a delay in setting up a new schedule is that he had received no assurances when the vaccine will arrive for the county’s use.<br><br>Detroit health officials today postponed the first inoculation in Detroit, scheduled for Monday, because they had not received enough vaccine.<br><br>It was reported in New York that southern states were receiving first consideration in the distribution of the vaccine from the Foundation because the polio season begins earlier in the south.<br><br>Washtenaw county’s inoculation program, like those in all the other counties in the nation, was thrown into confusion Tuesday when Dr. Jonas E. Salk, who developed the vaccine, reported that recent experiments showed that two shots given from two to four weeks apart, followed by a third, “booster" shot, about seven months later, may be the answer to long-term immunity. The "booster” shot triggered a tremendous flow of antibodies in the blood.<br><br>Reports Effectiveness<br><br>Earlier that same day, Dr. Thomas Francis, jr., University epidemiologist, had reported to an anxious world that the vaccine was highly effective in combatting paralytic polio.<br><br>Dr. Francis’ report concerned a year-long study of the vaccine’s effectiveness. His study included some 440,000 children who were given three shots of the vaccine within a five-week period.<br><br>At the time Dr. Francis’ study was begun last year, it was believed that three shots in the space of five weeks was tjie most effective way of building up antibodies in the blood.<br><br>Dr. Engelke said today that the only major problem now in the county’s program is establishing a schedule.<br><br>He said arrangements for county doctors, nurses and other personnel needed to participate in the program had' been completed.<br><br>Section Two<br><br>Pages 13 to 24