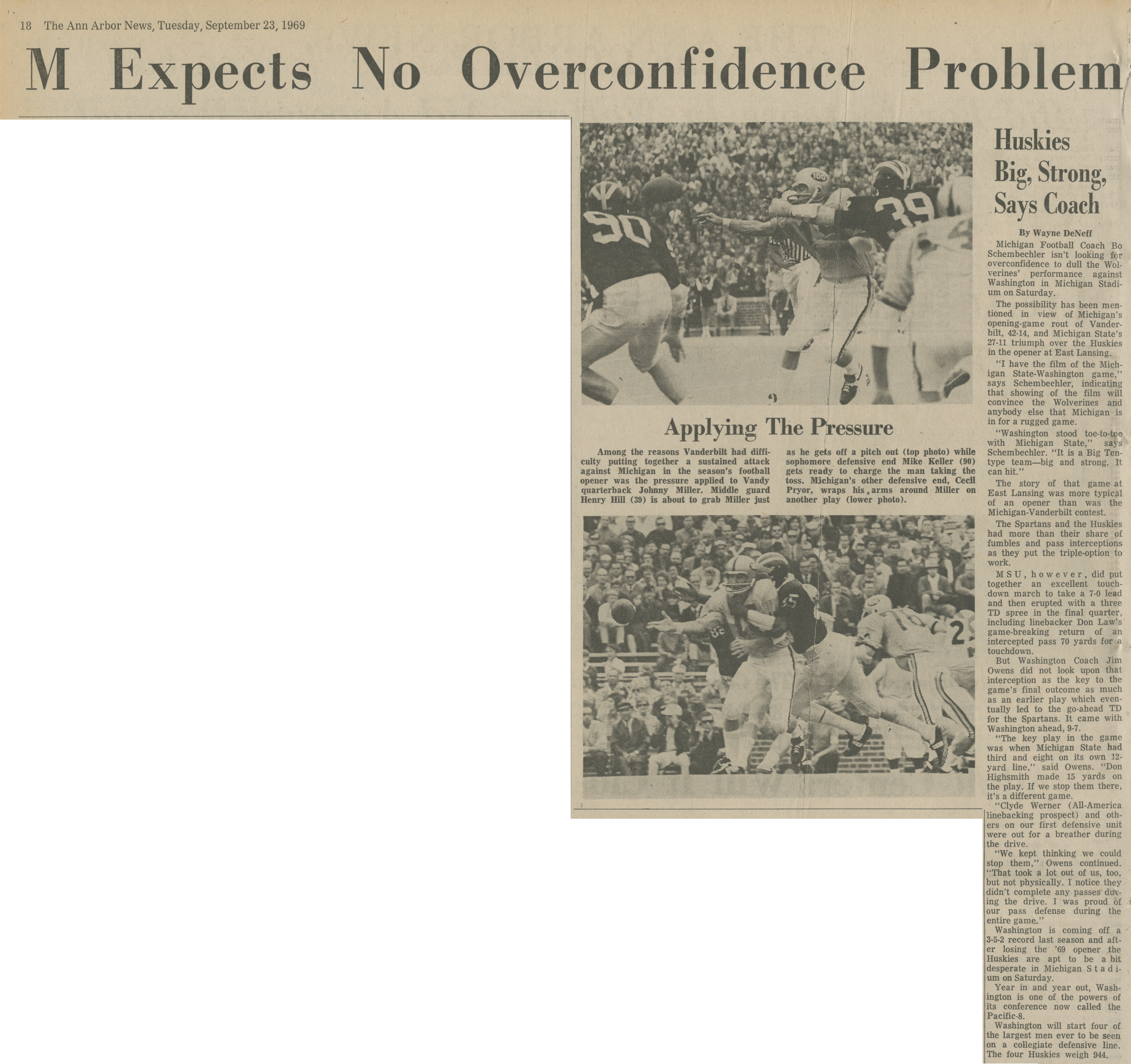 The possibility has been mentioned in view of Michigan’s opening-game rout of Vanderbilt, 42-14, and Michigan State’s 27-11 triumph over the Huskies in the opener at East Lansing.

“I have the film of the Michigan State-Washington game,” says Schembechler, indicating that showing of the film will convince the Wolverines and anybody else that Michigan is in for a rugged game.

“Washington stood toe-to-toe with Michigan State,” says Schembechler. “It is a Big Ten-type team—big and strong. It can hit.”

The story of that game at East Lansing was more typical of an opener than was the Michigan-Vanderbilt contest.

The Spartans and the Huskies had more than their share of fumbles and pass interceptions as they put the triple-option to work.

MSU, however, did put together an excellent touchdown march to take a 7-0 lead and then erupted with a three TD spree in the final quarter, including linebacker Don Law’s game-breaking return of an intercepted pass 70 yards for a touchdown.

But Washington Coach Jim Owens did not look upon that interception as the key to the game’s final outcome as much as an earlier play which eventually led to the go-ahead TD for the Spartans. It came with Washington ahead, 9-7.

“The key play in the game was when Michigan State had third and eight on its own 12-yard line,” said Owens. “Don Highsmith made 15 yards on the play. If we stop them there, it’s a different game.

“Clyde Werner (All-America linebacking prospect) and others on our first defensive unit were out for a breather during the drive.

“We kept thinking we could stop them,” Owens continued. “That took a lot out of us, too, but not physically. I notice they didn’t complete any passes during the drive. I was proud of our pass defense during the entire game.”

Washington is coming off a 3-5-2 record last season and after losing the ’69 opener the Huskies are apt to be a bit desperate in Michigan Stadium on Saturday.

Year in and year out, Washington is one of the powers of its conference now called the Pacific-8.

Washington will start four of the largest men ever to be seen on a collegiate defensive line. The four Huskies weigh 944.

PHOTO CAPTION: Applying The Pressure: Among the reasons Vanderbilt had difficulty putting together a sustained attack against Michigan in the season’s football opener was the pressure applied to Vandy quarterback Johnny Miller. Middle guard Henry Hill (39) is about to grab Miller just as he gets off a pitch out (top photo) while sophomore defensive end Mike Keller (90) gets ready to charge the man taking the toss. Michigan’s other defensive end, Cecil Pryor, wraps his arms around Miller on another play (lower photo).