Injured Wolverines Soon Will Be Ready 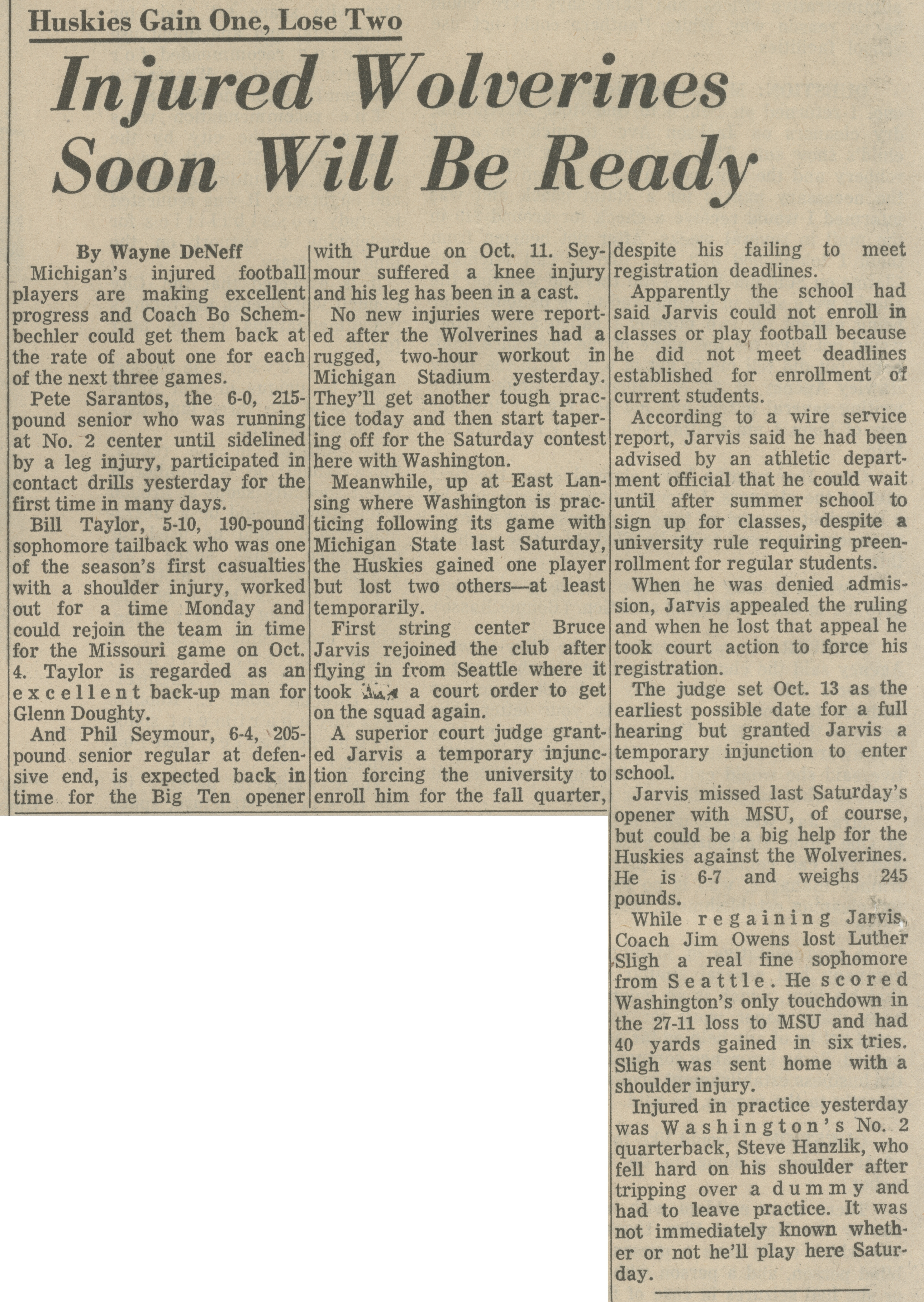 Michigan’s injured football players are making excellent progress and Coach Bo Schembechler could get them back at the rate of about one for each of the next three games.
Pete Sarantos, the 6-0, 215-pound senior who was running at No. 2 center until sidelined by a leg injury, participated in contact drills yesterday for the first time in many days.
Bill Taylor, 5-10, 190-pound sophomore tailback who was one of the season’s first casualties with a shoulder injury, worked out for a long time Monday and could rejoin the team in time for the Missouri game on Oct. 4. Taylor is regarded as an excellent back-up man for Glenn Doughty.
And Phil Seymour, 6-4, 205-pound senior regular at defensive end, is expected back in time for the Big Ten opener with Purdue on Oct. 11. Seymour suffered a knee injury and his leg has been in a cast.
No new injuries were reported after the Wolverines had a rugged, two-hour workout in Michigan Stadium yesterday. They’ll get another tough practice today and then start tapering off for the Saturday contest here with Washington.
Meanwhile, up at East Lansing where Washington is practicing following its game with Michigan State last Saturday, the Huskies gained one player but lost two others—at least temporarily.
First string center Bruce Jarvis rejoined the club after flying in from Seattle where it took him a court order to get on the squad again.
A superior court judge granted Jarvis a temporary injunction forcing the university to enroll him for the fall quarter, despite his failing to meet registration deadlines.
Apparently the school had said Jarvis could not enroll in classes or play football because he did not meet deadlines established for enrollment of current students.
According to a wire service report, Jarvis said he had been advised by an athletic department official that he could wait until after summer school to sign up for classes, despite a university rule requiring pre-enrollment for regular students.
When he was denied admission, Jarvis appealed the ruling and when he lost that appeal he took court action to force his registration.
The judge set Oct. 13 as the earliest possible date for a full hearing but granted Jarvis a temporary injunction to enter school.
Jarvis miss last Saturday's opener with MSU, of course, but could be a big help for the Huskies against the Wolverines. He is 6-7 and weighs 245 pounds.
While regaining Jarvis, Coach Jim Owens lost Luther Sligh a real fine sophomore from Seattle. He scored Washington's only touchdown in the 27-11 loss to MSU and had 40 yards gained in six tries. Sligh was sent home with a shoulder injury.
Injured in practice yesterday was Washington's No. 2 quarterback, Steve Hanzlik, who fell hard on his shoulder after tripping over a dummy and had to leave practice. It was not immediately known whether or not he'll play here Saturday.