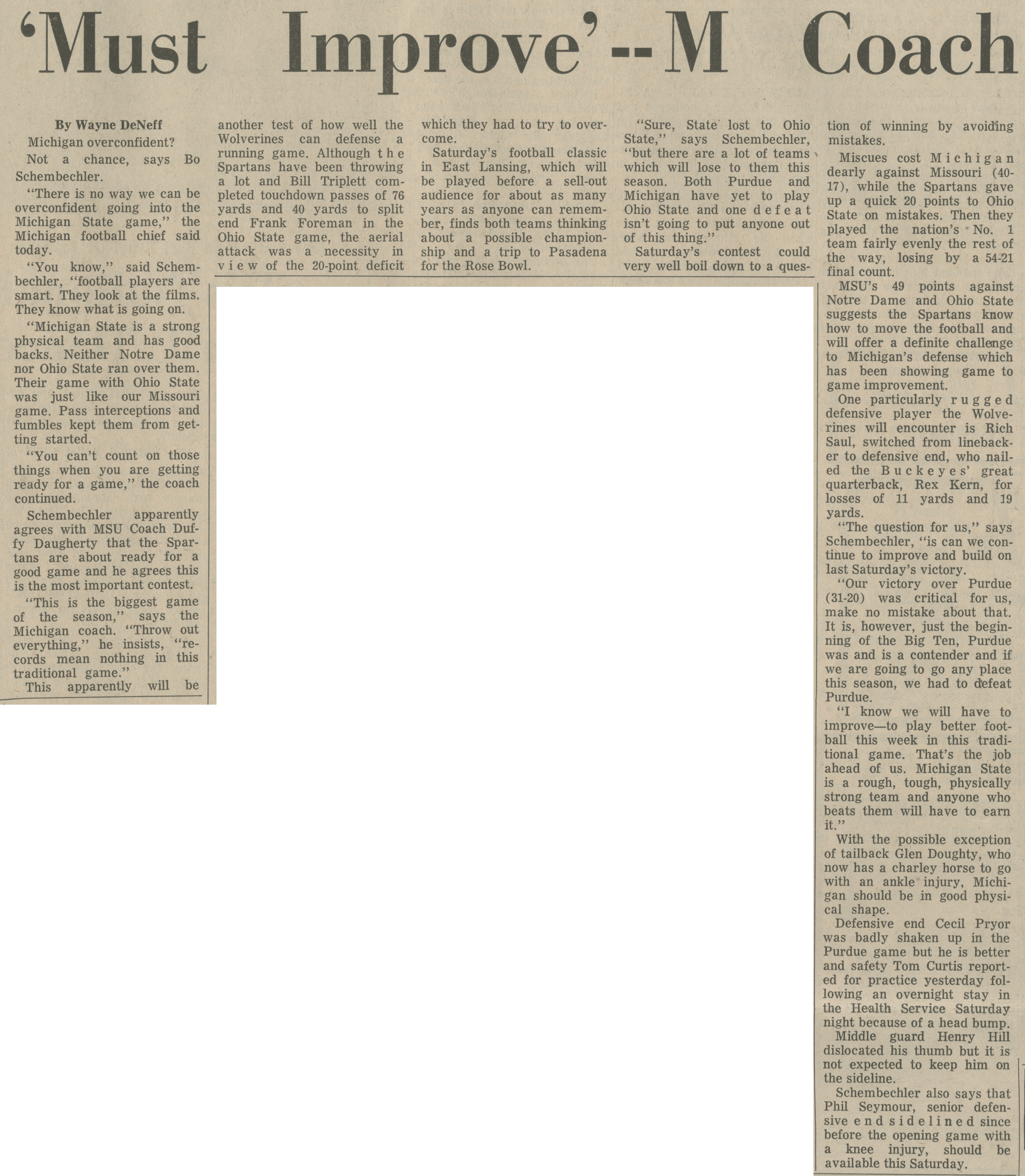 ‘MUST IMPROVE’—M COACH
By Wayne DeNeff

Michigan overconfident?
Not a chance, says Bo Schembechler.
“There is no way we can be overconfident going into the Michigan State game,” the Michigan football chief said today.
“You know,” said Schembechler, “football players are smart. They look at the films. They know what is going on.
“Michigan State is a strong physical team and has good backs. Neither Notre Dame nor Ohio State ran over them. Their game with Ohio State was just like our Missouri game. Pass interceptions and fumbles kept them from getting started.
“You can’t count on those things when you are getting ready for a game,” the coach continued.
Schembechler apparently agrees with MSU Coach Duffy Daugherty that the Spartans are about ready for a good game and he agrees this is the most important contest.
“This is the biggest game of the season,” says the Michigan coach. “Throw out everything,” he insists, “records mean nothing in this traditional game.”
This apparently will be another test of how well the Wolverines can defense a running game. Although the Spartans have been throwing a lot and Bill Triplett completed touchdown passes of 76 yards and 40 yards to split end Frank Foreman in the Ohio State game, the aerial attack was a necessity in view of the 20-point deficit which they had to try to overcome.
Saturday’s football classic in East Lansing, which will be played before a sell-out audience for about as many years as anyone can remember, finds both teams thinking about a possible championship and a trip to Pasadena for the Rose Bowl.
“Sure, State lost to Ohio State,” says Schembechler, “but there are a lot of teams which will lose to them this season. Both Purdue and Michigan have yet to play Ohio State and one defeat isn’t going to put anyone out of this thing.”
Saturday’s contest could very well boil down to a question of winning by avoiding mistakes.
Miscues cost Michigan dearly against Missouri (40-17), while the Spartans gave up a quick 20 points to Ohio State on mistakes. Then they played the nation’s No. 1 team fairly evenly the rest of the way, losing by a 54-21 final count.
MSU’s 49 points against Notre Dame and Ohio State suggests the Spartans know how to move the football and will offer a definite challenge to Michigan’s defense which has been showing game to game improvement.
One particularly rugged defensive player the Wolverines will encounter is Rich Saul, switched from linebacker to defensive end, who nailed the Buckeyes’ great quarterback, Rex Kern, for losses of 11 yards and 19 yards.
“The question for us,” says Schembechler, “is can we continue to improve and build on last Saturday’s victory.
“Our victory over Purdue (31-20) was critical for us, make no mistake about that. It is, however, just the beginning of the Big Ten, Purdue was and is a contender and if we are going to go any place this season, we had to defeat Purdue.
“I know we will have to improve—to play better football this week in this traditional game. That’s the job ahead of us. Michigan State is a rough, tough, physically strong team and anyone who beats them will have to earn it.”
With the possible exception of tailback Glenn Doughty, who now has a charley horse to go with an ankle injury, Michigan should be in good physical shape.
Defensive end Cecil Pryor was badly shaken up in the Purdue game but he is better and safety Tom Curtis reported for practice yesterday following an overnight stay in the Health Service Saturday night because of a head bump.
Middle guard Henry Hill dislocated his thumb but it is not expected to keep him on the sideline.
Schembechler also says that Phil Seymour, senior defensive end sidelined since before the opening game with a knee injury, should be available this Saturday.