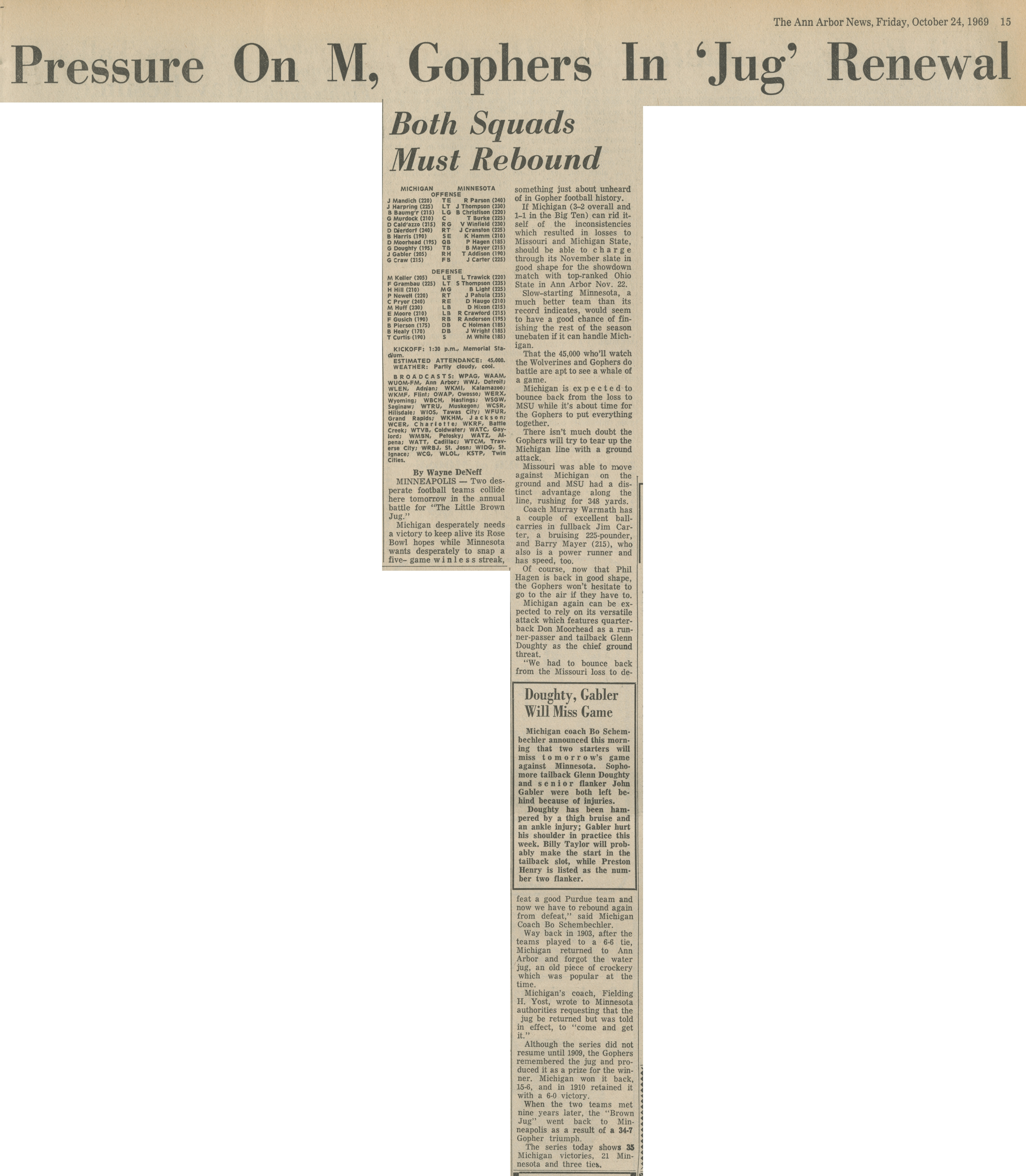 Both Squads Must Rebound

Michigan desperately needs a victory to keep alive its Rose Bowl hopes while Minnesota wants desperately to snap a five-game winless streak, something just about unheard of in Gopher football history.

If Michigan (3-2 overalland 1-1 in the Big Ten) can ride itself of the inconsistencies which resulted in losses to Missouri and Michigan State, should be able to charge through its November slate in good shape for the showdown match with top-ranked Ohio State in Ann Arbor Nov. 22.

Slow-starting Minnesota, a much better team than its record indicates, would seem to have a good chance of finishing the rest of the season unbeaten if it can handle Michigan.

That the 45,000 who’ll watch the Wolverines and Gophers do battle are apt to see a whale of a game.

Michigan is expected to bounce back from the loss to MSU while it’s about time for the Gophers to put everything together.

There isn’t much doubt the Gophers will try to tear up the Michigan line with a ground attack.

Missouri was able to move against Michigan on the ground and MSU had a distinct advantage along the line, rushing for 348 yards.

Coach Murray Warmath has a couple of excellent ballcarries in fullback Jim Carter, a bruising 225-pounder, and Barry Mayer (215), who also is a power runner and has speed, too.

OF course, now that Phil Hagen is back in good shape, the Gophers won’t hesitate to go to the air if they have to.

Michigan again can be expected to rely on its versatile attack which features quarterback Don Moorhead as a runner-passer and tailback Glenn Doughty as the chief ground threat.

“We had to bounce back from the Missouri loss to defeat a good Purdue team and now we have to rebound again from defeat,” said Michigan Coach Bo Schembechler.

Way back in 1903, after the teams played to a 6-6 tie, Michigan returned to Ann Arbor and forgot the water jug, an old piece of crockery which was popular at the time.

Michigan’s coach, Fielding H. Yost, wrote to Minnesota authorities requesting that the old jug be returned but was told in effect, to “come and get it.”

Although the series did not resume until 1909, the Gophers remembered the jug and produced it is as prize for the winner. Michigan won it back, 15-6, and in 1910 retained it with a 6-0 victory.

When the two teams met nine years later, the “Brown Jug” went back to Minneapolis as a result of a 34-7 Gopher triumph.

Doughty has been hampered by a thigh bruise and an ankle injury; Gabler hurt his shoulder in practice this week. Billy Taylor will probably make the start in the tailback slot, while Preston Henry is listed as the number two flanker.