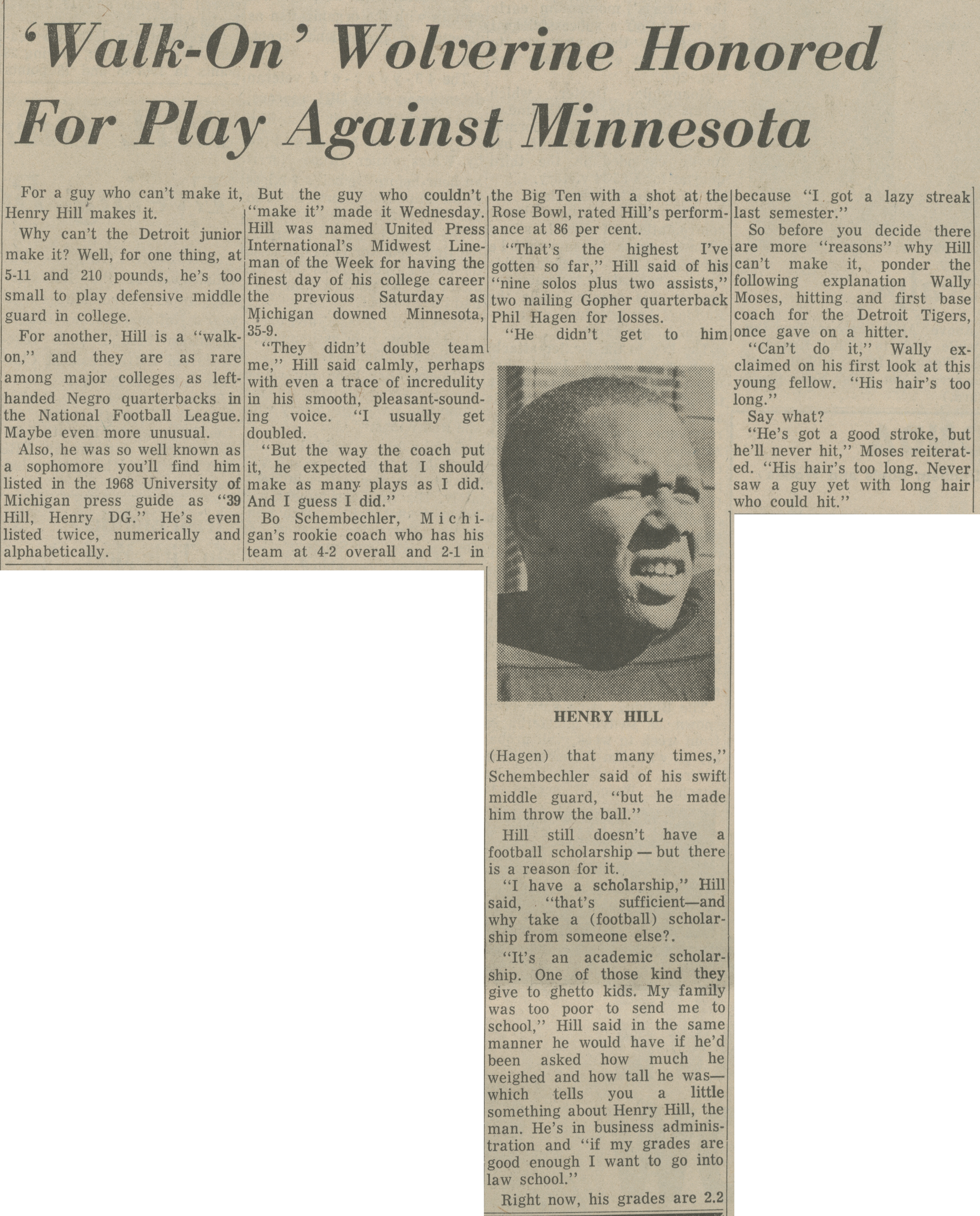 For a guy who can’t make it, Henry Hill makes it.

Why can’t the Detroit junior make it? Well, for one thing, at 5-11 and 210 pounds, he’s too small to play defensive middle guard in college.

For another, Hill is a “walk-on,” and they are as rare among major colleges as left-handed Negro quarterbacks in the National Football League. Maybe even more unusual.

Also, he was so well known as a sophomore you’ll find him listed in the 1968 University of Michigan press guide as “39 Hill, Henry DG.” He’s even listed twice, numerically and alphabetically.

But they guy who couldn’t “make it” made it Wednesday. Hill was named United Press International’s Midwest Lineman of the Week for having the finest day of his college career the previous Saturday as Michigan downed Minnesota, 35-9.

“They didn’t double team me,” Hill said calmly, perhaps with even a trace of incredulity in his smooth, pleasant-sounding voice. “I usually get doubled.

“But the way the coach put it, he expected that I should make as many plays as I did. And I guess I did.”

Bo Schembechler, Michigan’s rookie coach who has his team at 4-2 overall and 2-1 in the Big Ten with a shot at the Rose Bowl, rated Hill’s performance at 86 per cent.

“He didn’t get to him (Hagen) that many times,” Schembechler said of his swift middle guard, “but he made him throw the ball.”

Hill still doesn’t have a football scholarship—but there is a reason for it.

“I have a scholarship,” Hill said, “that’s sufficient—and why take a (football) scholarship from someone else?

“It’s an academic scholarship. One of those kind they give to ghetto kids. My family was too poor to send me to school,” Hill said in the same manner he would have if he’d been asked how much he weighed and how tall he was—which tells you a little something about Henry Hill, the man. He’s in business administration and “if my grades are good enough I want to go into law school.”

Right now, hos grades are 2.2 because “I got a lazy streak last semester.”

So, before you decide there are more “reasons” why Hill can’t make it, ponder the following explanation Wally Moses, hitting and first base coach for the Detroit Tigers, once gave on a hitter.

“Can’t do it,” Wally exclaimed on his first look at this young fellow. “His hair’s too long.”

“He’s got a good stroke, but he’ll never hit,” Moses reiterated. “His hair’s too long. Never saw a guy yet with long hair who could hit.”