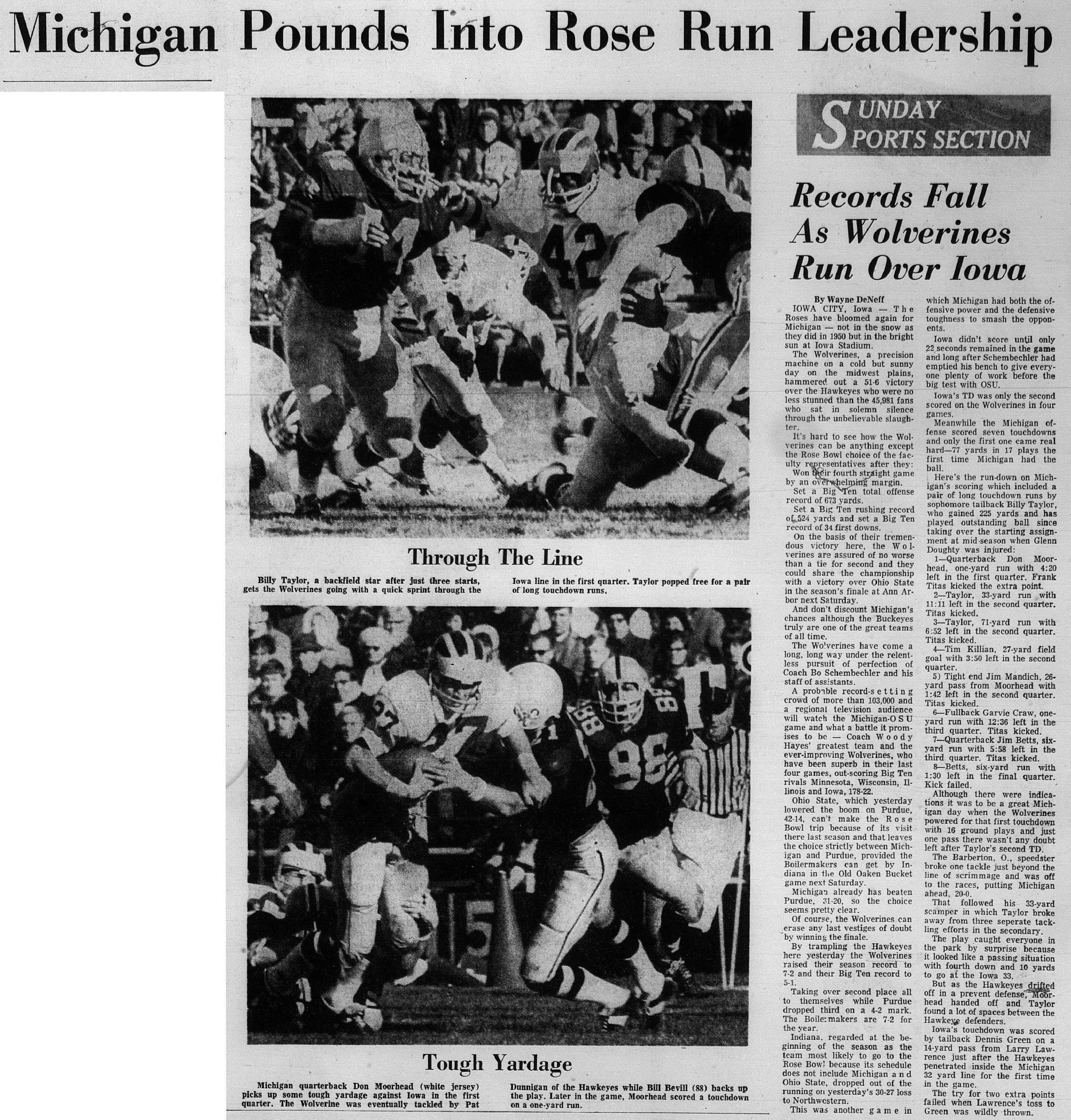 IOWA CITY, Iowa—The Roses have bloomed again for Michigan—not in the snow as they did in 1950 but in the bright sun at Iowa Stadium.
The Wolverines, a precision machine on a cold but sunny day on the Midwest plains, hammed out a 51-6 victory over the Hawkeyes who were no less stunned than the 45,981 fans who sat in solemn silence through the unbelievable slaughter.
It’s hard to see how the Wolverines can be anything except the Rose Bowl choice of the faculty representatives after they:
Won their fourth straight game by an overwhelming margin.
Set a Big Ten total offense record of 673 yards.
Set a Big Ten rushing record of 524 yards and set a Big Ten record of 34 first downs.
On the basis of their tremendous victory here, the Wolverines are assured of no worse than a tie for second and they could share the championship with a victory over Ohio State in the season’s finale at Ann Arbor next Saturday.
And don’t discount Michigan’s chances although the Buckeyes truly are one of the great teams of all time.
The Wolverines have come a long, long way under the relentless pursuit of perfection of Coach Bo Schembechler and his staff of assistants.
A probable record-setting crowd of more than 103,000 and a regional television audience will watch the Michigan-OSU game and what a battle it promises to be—Coach Woody Hayes’ greatest team and the ever-improving Wolverines, who have been superb in their last four games, out-scoring Big Ten rivals Minnesota, Wisconsin, Illinois and Iowa, 178-22.
Ohio State, which yesterday lowered the boom on Purdue, 42-14, can’t make the Rose Bowl trip because of its visit there last season and that leaves the choice strictly between Michigan and Purdue, provided the Boilermakers can get by Indiana in the Old Oaken Bucket game next Saturday.
Michigan already has beaten Purdue, 31-20, so the choice seems pretty clear.
Of course, the Wolverines can erase any last vestiges of doubt by winning the finale.
By trampling the Hawkeyes here yesterday the Wolverines raised their season record to 7-2 and their Big Ten record to 5-1.
Taking over second place all to themselves while Purdue dropped third on a 4-2 mark. The Boilermakers are 7-2 for the year.
Indiana, regarded at the beginning of the season as the team most likely to go to the Rose Bowl because its schedule does not include Michigan and Ohio State, dropped out of the running on yesterday’s 30-27 loss to Northwestern.
This was another game in which Michigan had both the offensive power and the defensive toughness to smash the opponents.
Iowa didn’t score until only 22 seconds remained in the game and long after Schembechler had emptied his bench to give everyone plenty of work before the big test with OSU.
Iowa’s TD was only the second scored on the Wolverines in four games.
Meanwhile the Michigan offense scored seven touchdowns and only the first one came real hard—77 yards in 17 plays the first time Michigan had the ball.
Here’s the run-down on Michigan’s scoring which included a pair of long touchdown runs by sophomore tailback Billy Taylor, who gained 225 yards and has played outstanding ball since taking over the starting assignment at mid-season when Glenn Doughty was injured:
1—Quarterback Don Moorhead, one-yard run with 4:20 left in the first quarter. Frank Titas kicked the extra point.
2—Taylor, 33-yard run with 11:11 left in the second quarter. Titas kicked.
3—Taylor, 71-yard run with 6:52 left in the second quarter. Titas kicked.
4—Tim Killian, 27-yard field goal with 3:50 left in the second quarter.
5—Tight end Jim Mandich, 26-yard pass from Moorhead with 1:42 left in the second quarter. Titas kicked.
6—Fullback Garvie Craw, one-yard run with 12:36 left in the third quarter. Titas kicked.
7—Quarterback Jim Betts, six-yard run with 5:58 left in the third quarter. Titas kicked.
8—Betts, six-yard run with 1:30 left in the final quarter. Kick failed.
Although there were indications it was to be a great Michigan day when the Wolverines powered for that first touchdown with 16 ground plays and just one pass there wasn’t any doubt left after Taylor’s second TD.
The Barberton, O., speedster broke one tackle just beyond the line of scrimmage and was off to the races, putting Michigan ahead, 20-0.
That followed his 33-yard scamper in which Taylor broke away from three separate tackling efforts in the secondary.
The play caught everyone in the park by surprise because it looked like a passing situation with fourth down and 10 yards to go at the Iowa 33.
But as the Hawkeyes drifted off in a prevent defense, Moorhead handed off and Taylor found a lot of spaces between the Hawkeye defenders.
Iowa’s touchdown was scored by tailback Dennis Green on a 14-yard pass from Larry Lawrence just after the Hawkeyes penetrated inside the Michigan 32 yard line for the first time in the game.
The try for two extra points failed when Lawrence’s toss to Green was wildly thrown.

PHOTO CAPTION 1: Through The Line: Billy Taylor, a backfield star after just three starts, gets the Wolverines going with a quick sprint through the Iowa line in the first quarter. Taylor popped free for a pair of long touchdown runs.

PHOTO CAPTION 2: Tough Yardage: Michigan quarterback Don Moorhead (white jersey) picks up some tough yardage against Iowa in the first quarter. The Wolverine was eventually tackled by Pat Dunnigan of the Hawkeyes while Bill Bevill (88) backs up the play. Later in the game, Moorhead scored a touchdown on a one-yard run.