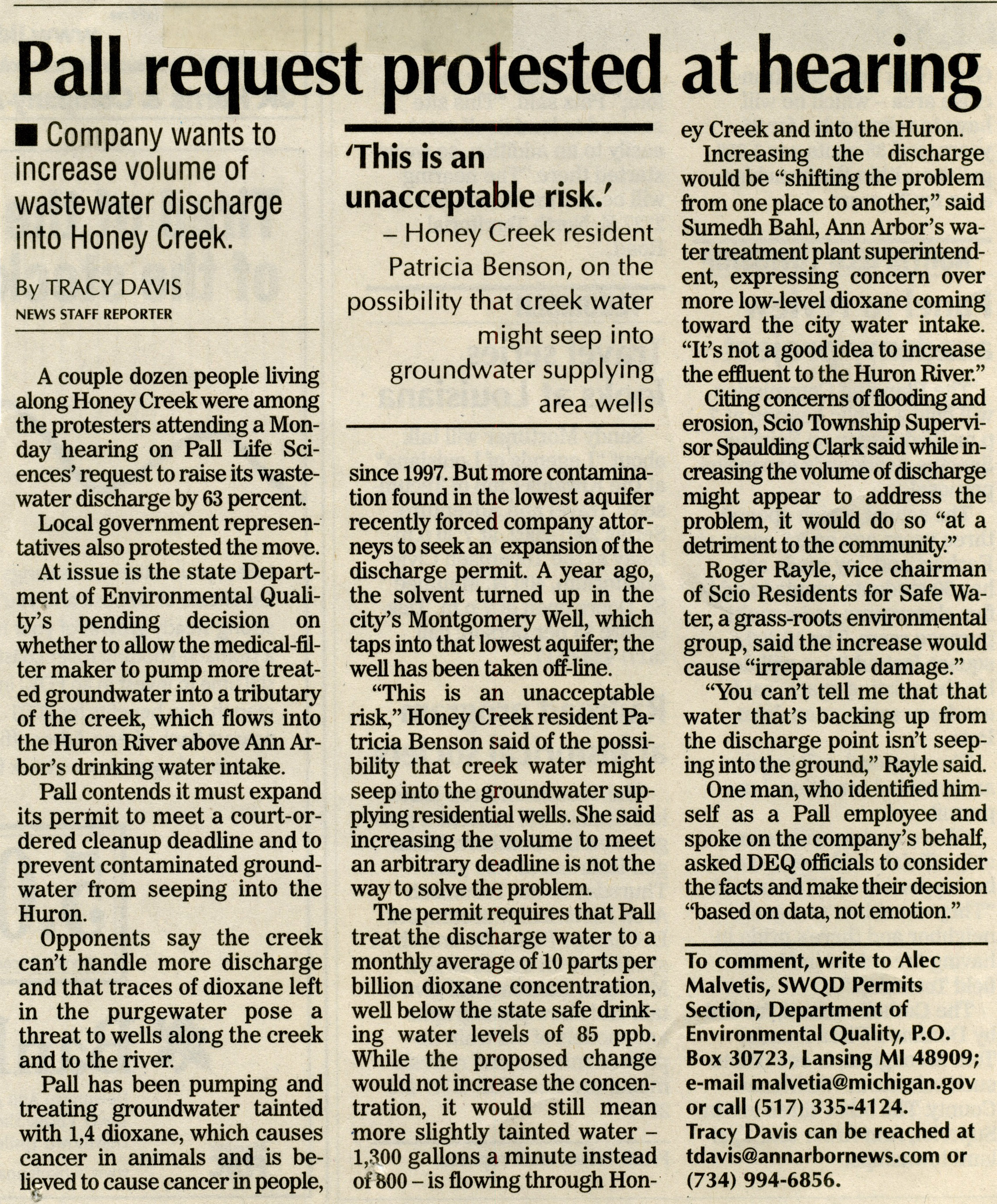 A couple dozen people living along Honey Creek were among the protesters attending a Monday hearing on Pall Life Sciences’ request to raise its waste-water discharge by 63 percent.

At issue is the state Department of Environmental Quality’s pending decision on whether to allow the medical-filter maker to pump more treated groundwater into a tributary of the creek, which flows into the Huron River above Ann Arbor’s drinking water intake.

Pall contends it must expand its permit to meet a court-ordered cleanup deadline and to prevent contaminated ground-water from seeping into the Huron.

Opponents say the creek can’t handle more discharge and that traces of dioxane left in the purgewater pose a threat to wells along the creek and to the river.

Pall has been pumping and treating groundwater tainted with 1,4 dioxane, which causes cancer in animals and is believed to cause cancer in people,

'This is an unacceptable risk.'

since 1997. But more contamination found in the lowest aquifer recently forced company attorneys to seek an expansion of the discharge permit. A year ago, the solvent turned up in the city’s Montgomery Well, which taps into that lowest aquifer; the well has been taken off-line.

“This is an unacceptable risk,” Honey Creek resident Patricia Benson said of the possibility that creek water might seep into the groundwater supplying residential wells. She said increasing the volume to meet an arbitrary deadline is not the way to solve the problem.

The permit requires that Pall treat the discharge water to a monthly average of 10 parts per billion dioxane concentration, well below the state safe drinking water levels of 85 ppb. While the proposed change would not increase the concentration, it would still mean more slightly tainted water -1,300 gallons a minute instead of 800 - is flowing through Honey Creek and into the Huron.

Increasing the discharge would be “shifting the problem from one place to another,” said Sumedh Bahl, Ann Arbor’s water treatment plant superintendent, expressing concern over more low-level dioxane coming toward the city water intake. “It’s not a good idea to increase the effluent to the Huron River.” Citing concerns of flooding and erosion, Scio Township Supervisor Spaulding Clark said while increasing the volume of discharge might appear to address the problem, it would do so “at a detriment to the community.” Roger Rayle, vice chairman of Scio Residents for Safe Water, a grass-roots environmental group, said the increase would cause “irreparable damage.” “You can’t tell me that that water that’s backing up from the discharge point isn’t seeping into the ground,” Rayle said.

One man, who identified himself as a Pall employee and spoke on the company’s behalf, asked DEQ officials to consider the facts and make their decision “based on data, not emotion.”