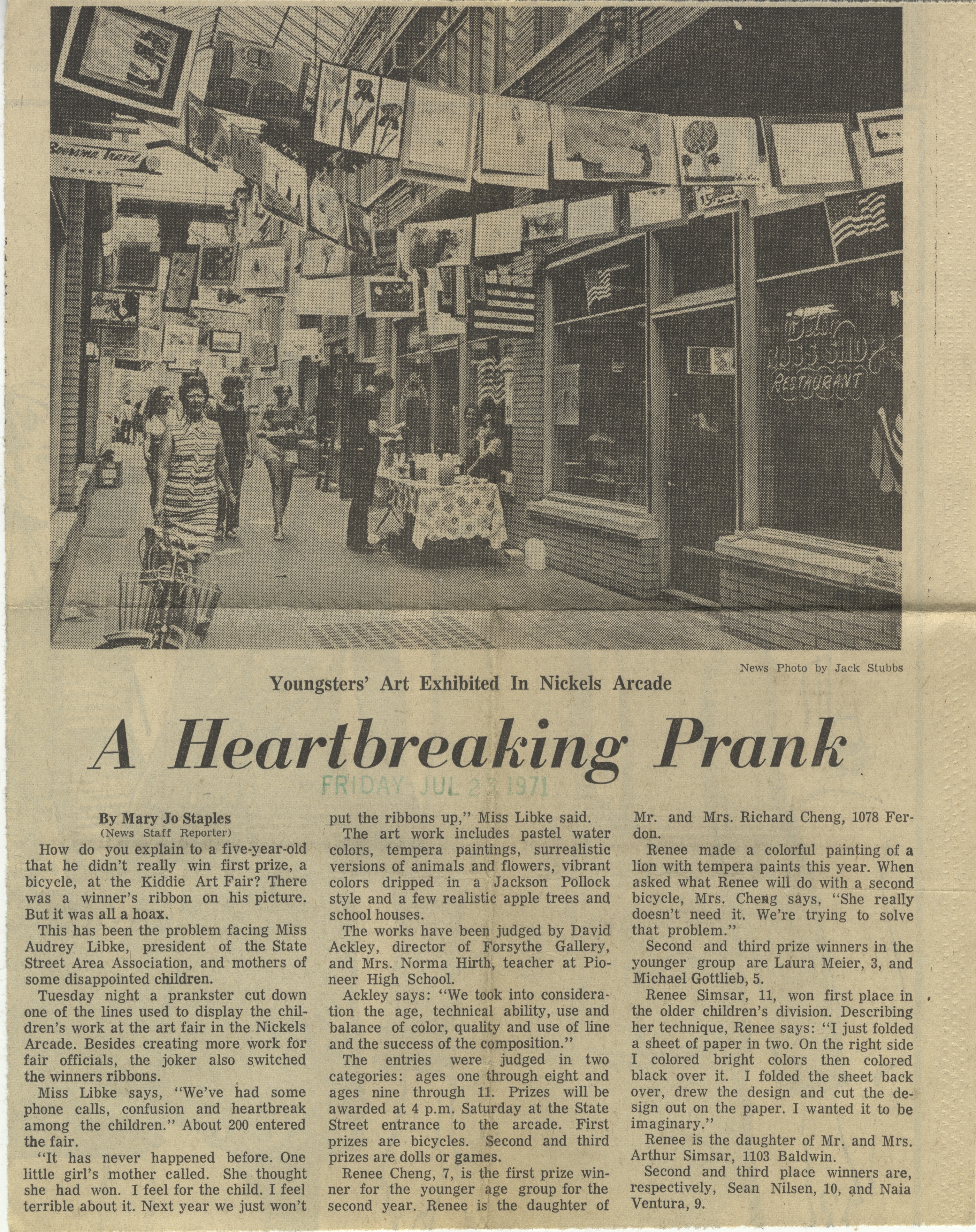 How do you explain to a five-year-old that he didn’t really win first prize, a bicycle, at the Kiddie Art Fair? There was a winner’s ribbon on his picture. But it was all a hoax.

This has been the problem facing Miss Audrey Libke, president of the State Street Area Association, and mothers of some disappointed children.

Tuesday night a prankster cut down one of the lines used to display the children’s work at the art fair in the Nickels Arcade. Besides creating more work for fair officials, the joker also switched the winners ribbons.

Miss Libke says, “We’ve had some phone calls, confusion and heartbreak among the children.” About 200 entered the fair.

“It has never happened before. One little girl’s mother called. She thought she had won. I feel for the child. I feel terrible about it. Next year we just won’t

The works have been judged by David Ackley, director of Forsythe Gallery, and Mrs. Norma Hirth, teacher at Pioneer High School.

Ackley says: “We took into consideration the age, technical ability, use and balance of color, quality and use of line and the success of the composition.”

The entries were judged in two categories: ages one through eight and ages nine through 11. Prizes will be awarded at 4 p.m. Saturday at the State Street entrance to the arcade. First prizes are bicycles. Second and third prizes are dolls or games.

Renee Cheng, 7, is the first prize winner for the younger age group for the second year. Renee is the daughter of

Renee made a colorful painting of a lion with tempera paints this year. When asked what Renee will do with a second bicycle, Mrs. Cheng says, “She really doesn’t need it. We’re trying to solve that problem.”

Second and third prize winners in the younger group are Laura Meier, 3, and Michael Gottlieb, 5.

Renee Simsar, 11, won first place in the older children’s division. Describing her technique, Renee says: “I just folded a sheet of paper in two. On the right side I colored bright colors then colored black over it. I folded the sheet back over, drew the design and cut the design out on the paper. I wanted it to be imaginary.”

Renee is the daughter of Mr. and Mrs. Arthur Simsar, 1103 Baldwin.