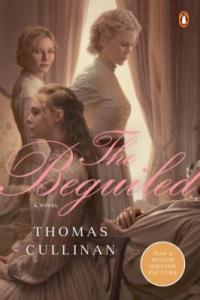 The Beguiled is a Southern Gothic novel set in 1864 Virginia. Three years into the civil war, an all-girls boarding school houses two teachers and five young girls. They find themselves caught in a situation of morality and deception when a wounded Yankee soldier is found in the woods outside their manor. The plot slowly unfolds as each chapter is told from the point of view of a different character, and more of their motivation is revealed. This novel will draw you in and have you anxiously awaiting to see who is really charming who under the hot Southern sun.

The book was published in 1966, but went out of print. It was recently put into reprint for the release of the 2017 movie remake by Sofia Coppola, starring Nicole Kidman, Kirsten Dunst, and Colin Farrell. The original movie adaptation from 1971 stars Clint Eastwood.