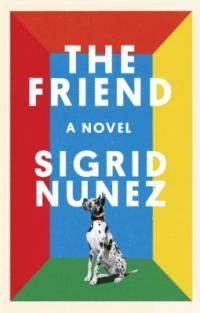 The unnamed narrator of Sigrid Nunez’s new novel, The Friend, is in mourning for her best friend. He has left her an unexpected inheritance in the form of his elderly great dane, Apollo, who is also deeply bereft. What follows is a unusual tale of a new friendship, an exploration of grief, and an examination of the writing life. Though the novel looks closely at the pain of loss, it is not without humor, as might be elicited by life with a giant dog and his daily habits. As Nunez’s narrator and the narrator’s late friend are both writers, her book is as much about this as it is a pet tale. By my count, there are at least 58 writers in these 212 pages, novelists, poets, playwrights, philosophers, whose mention adds to the depth of thought and the richness of the story. This is not a book of action, but of reflection, the narrator speaking mostly to the friend she has lost and occasionally to the dog she has gained. The Friend is a beautiful, deeply moving novel, Nunez’s 7th, but the first of her’s that I’ve read. I have some catching up to do!