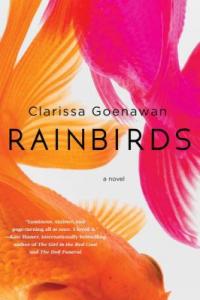 Rainbirds * by Clarissa Goenawan is an unusual murder mystery, set in 1990s Japan; and a young man’s ruminations about family and loss as he searches for answers about his sister he thought he knew.

When news of his elder sister Keiko’s murder reached him in Tokyo, graduate student Ren Ishida was at a loss.  The siblings were close growing up but eleven years ago, Keiko then 22, abruptly abandoned the family for the small town of Akakawa. As the grieving Ren tried to find closure as to why Keiko was viciously stabbed on a dark secluded road, he began to retrace Keiko’s steps, picking up where she left off. He took over her teaching position at a cram school, and the bizarre arrangement of free rent at a wealthy politician's house. Against his better judgement, Ren was drawn to a beautiful and troubled student he nicknamed "Seven Stars". Things got decidedly thorny when he realized she might be connected to his sister’s murder.