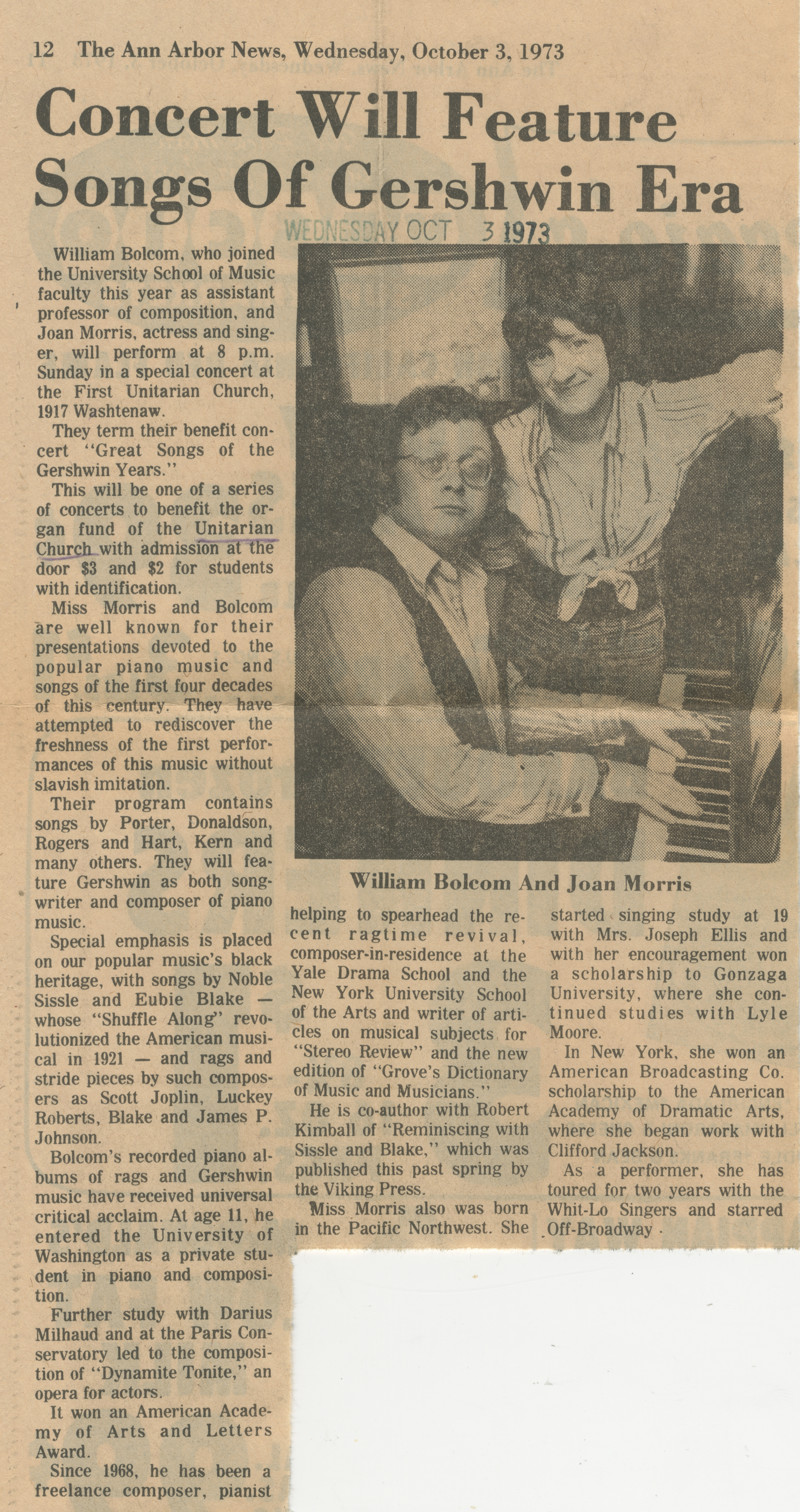 William Bolcom, who joined the University School of Music faculty this year as assistant professor of composition, and Joan Morris, actress and singer, will perform at 8 p.m. Sunday in a special concert at the First Unitarian Church, 1917 Washtenaw.

They term their benefit concert “Great Songs of the Gershwin Years.”

This will be one of a series of concerts to benefit the organ fund of the Unitarian Church with admission at the door $3 and $2 for students with identification.

Miss Morris and Bolcom are well known for their presentations devoted to the popular piano music and songs of the first four decades of this century. They have attempted to rediscover the freshness of the first performances of this music without slavish imitation.

Their program contains songs by Porter, Donaldson, Rogers and Hart, Kern and many others. They will feature Gershwin as both songwriter and composer of piano music.

Special emphasis is placed on our popular music’s black heritage, with songs by Noble Sissle and Eubie Blake — whose “Shuffle Along” revolutionized the American musical in 1921 — and rags and stride pieces by such composers as Scott Joplin, Luckey Roberts, Blake and James P. Johnson.

Bolcom’s recorded piano albums of rags and Gershwin music have received universal critical acclaim. At age 11, he entered the University of Washington as a private student in piano and composition.

Further study with Darius Milhaud and at the Paris Conservatory led to the composition of “Dynamite Tonite,” an opera for actors.

It won an American Academy of Arts and Letters Award.

Since 1968, he has been a freelance composer, pianist helping to spearhead the recent ragtime revival, composer-in-residence at the Yale Drama School and the New York University School of the Arts and writer of articles on musical subjects for “Stereo Review” and the new edition of “Grove’s Dictionary of Music and Musicians."

He is co-author with Robert Kimball of “Reminiscing with Sissle and Blake,” which was published this past spring by the Viking Press.

Miss Morris also was born in the Pacific Northwest. She started singing study at 19 with Mrs. Joseph Ellis and with her encouragement won a scholarship to Gonzaga University, where she continued studies with Lyle Moore.

In New York, she won an American Broadcasting Co. scholarship to the American Academy of Dramatic Arts, where she began work with Clifford Jackson.

As a performer, she has toured for two years with the Whit-Lo Singers and starred Off-Broadway.