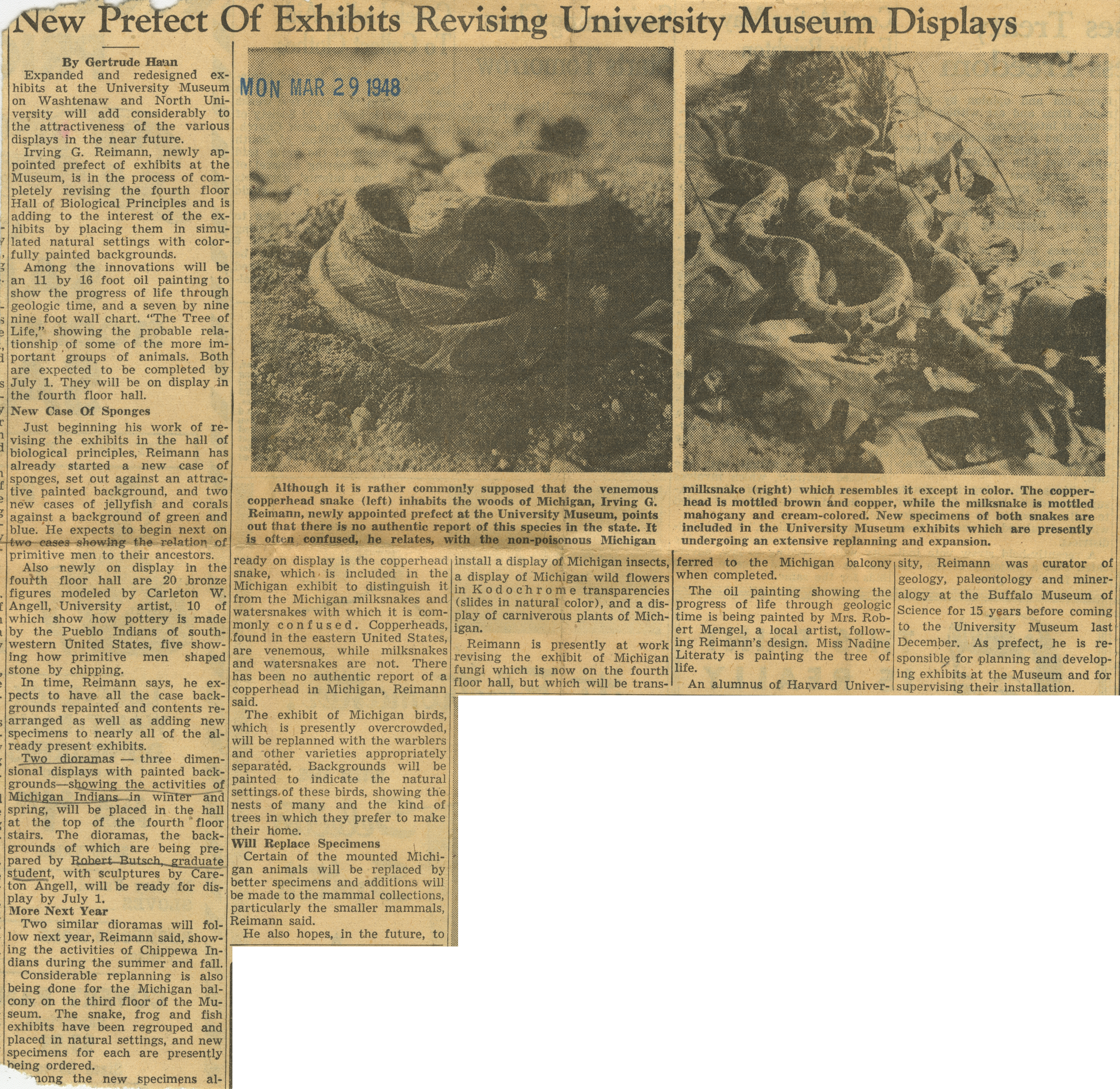 Expanded and redesigned exhibits at the University Museum on Washtenaw and North University will add considerably to the attractiveness of the various displays in the near future.

Irving G. Reimann, newly appointed prefect of exhibits at the Museum, is in the process of completely revising the fourth floor Hall of Biological Principles and is adding to the interest of the exhibits by placing them in simulated natural settings with colorfully painted backgrounds.

Among the innovations will be an 11 by 16 foot oil painting to show the progress of life through geologic time, and a seven by nine nine foot wall chart. “The Tree of Life,” showing the probable relationship of some of the more important groups of animals. Both are expected to be completed by July 1. They will be on display in the fourth floor hall.

Just beginning his work of revising the exhibits in the hall of biological principles, Reimann has already started a new case of sponges, set out against an attractive painted background, and two new cases of jellyfish and corals against a background of green and blue. He expects to begin next on two cases showing the relation of primitive men to their ancestors.

Also newly on display in the fourth floor hall are 20 bronze figures modeled by Carleton W. Angell, University artist, 10 of which show how pottery is made by the Pueblo Indians of southwestern United States, five showing how primitive men shaped stone by chipping.

In time, Reimann says, he expects to have all the case backgrounds repainted and contents rearranged as well as adding new specimens to nearly all of the already present exhibits.

Two dioramas—three dimensional displays with painted backgrounds—showing the activities of Michigan Indians in winter and spring, will be placed in the hall at the top of the fourth floor stairs. The dioramas, the backgrounds of which are being prepared by Robert Butsch, graduate student, with sculptures by Carleton Angell, will be ready for display by July 1.

Two similar dioramas will follow next year, Reimann said, showing the activities of Chippewa Indians during the summer and fall.

Considerable replanning is also being done for the Michigan balcony on the third floor of the Museum. The snake, frog and fish exhibits have been regrouped and placed in natural settings, and new specimens for each are presently being ordered.

Among the new specimens already on display is the copperhead snake, which is included in the Michigan exhibit to distinguish it from the Michigan milksnakes and watersnakes with which it is commonly confused. Copperheads, found in the eastern United States, are venomous, while milksnakes and watersnakes are not. There has been no authentic report of a copperhead in Michigan, Reimann said.

The exhibit of Michigan birds, which is presently overcrowded, will be replanned with the warblers and other varieties appropriately separated. Backgrounds will be painted to indicate the natural settings, of these birds, showing the nests of many and the kind of trees in which they prefer to make their home.

Certain of the mounted Michigan animals will be replaced by better specimens and additions will be made to the mammal collections, particularly the smaller mammals, Reimann said.

Reimann is presently at work revising the exhibit of Michigan fungi which is now on the fourth floor hall, but which will be transferred to the Michigan balcony when completed.

The oil painting showing the progress of life through geologic time is being painted by Mrs. Robert Mengel, a local artist, following Reimann’s design. Miss Nadine Literaty is painting the tree of life.

An alumnus of Harvard University, Reimann was curator of geology, paleontology and mineralogy at the Buffalo Museum of Science for 15 years before coming to the University Museum last December. As prefect, he is responsibly for planning and developing exhibits at the Museum and for supervising their installation.

Although it is rather commonly supposed that the venomous copperhead snake (left) inhabits the woods of Michigan, Irving G. Reimann, newly appointed prefect at the University Museum, points out that there is no authentic report of this species in the state. It is often confused, he relates, with the non-poisonous Michigan milksnake (right) which resembles it except in color. The copperhead is mottled brown and copper, while the milksnake is mottled mahogany and cream-colored. New specimens of both snakes are included in the University Museum exhibits which are presently undergoing an extensive replanning and expansion.