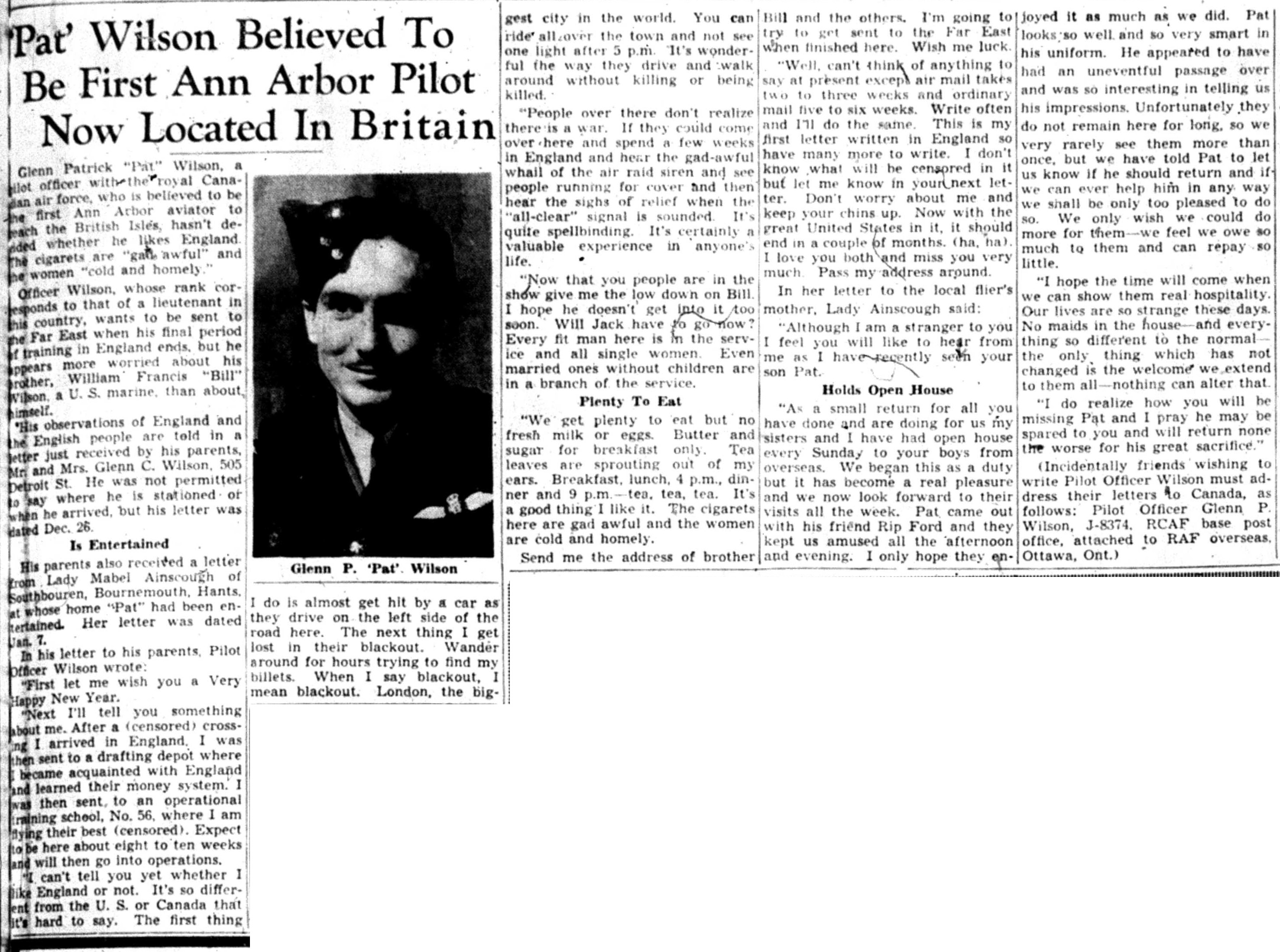 Glenn Patrick "Pat" Wilson, a pilot officer with the royal Canadian air force, who is believed to be the first Ann Arbor aviator to reach the British Isles, hasn't decided whether he like England. The cigarets are "gad awful" and the women "cold and homely."

Officer Wilson, whose rank corresponds to that of a lieutenant in this country, wants to be sent to the Far East when his final period of training in England ends, but he appears more owrried about his brother, William Francis "Bill" Wilson, a U.S. marine, than about himself.

His observations of England and the English people are told in a letter just received by his parents, Mr. and Mrs. Glenn C. Wilson, 505 Detroit St. He was not permitted to say where he is stationed or when he arrived, but his letter was dated Dec. 26.

His parents also received a letter from Lady Mabel Ainscough of Southbouren, Bournemouth, Hants, at whose home "Pat" had been entertained. Her letter was dated Jan. 7.

In his letter to his parents, Pilot Officer Wilson wrote:

"First let me wish you a Very Happy New Year.

"Next I'll tell you something about me. After a (censored) crossing I arrived in England. I was then sent to a drafting depot where I became acquainted with England and their money system. I was then sent to an operational training school, No. 56, where I am flying their best (censored). Expect to be here about eight to ten weeks and will then go into operations.

"I can't tell you yet whether I like England or not. It's so different from the U.S. or Canada that it's hard to say. The first thing I do is almost get hit by a car as they drive on the left side of the road here. The next thing I get lost in their blackout. Wander around for hours trying to find my billets. When I say blackout, I mean blackout. London, the biggest city In the world. You can ride all over the town and not see one light after 5 p.m. It's wonderful the way they drive and walk around without killing or being killed.

''People over there don't realize there is a war. If they could come over-here and spend a few weeks in England and hear the gad-awful whail of the air raid siren and see people running for cover and then hear the sighs of relief when the "all-clear" signal is sounded. It's quite spellbinding. It's certainly a valuable experience In anyone's life.

"Now that you people are in the show give me the low down on Bill. I hope he doesn't get into it too soon. Will Jack have to go now? Every fit man here is in the service and all single women. Even married ones without children are in a branch of the service.

“We get plenty to eat but no fresh milk or eggs. Butter and sugar for breakfast only. Tea leaves are sprouting out of my ears. Breakfast, lunch, 4 p.m., dinner and 9 p.m.--tea, tea, tea. It's a good thing I like it. The cigarets here are gad awful and the women are cold and homely.

Send me the address of brother Bill and the others. I'm going to try to get sent to the Ear East when finished here. Wish me luck.

"Well, can't think of any thing to say at present except air mall takes two to three weeks and ordinary mail five to six weeks. Write often and I'll do the same. This Is my first letter written in England so have many more to write. I don't know what will be censored in it but let me know in your next letter. Don't worry about me and keep your chins up. Now with the great United States in it, it should end in a couple of months. (ha, ha). I love you and miss you very much. Pass my address around.

In her letter to the local flier’s mother, Lady Ainscough said:

"Although I am a stranger to you I feel you will like to hear from me as I have recently seen your son Pat.

"As a small return for all you have done and are doing for us my sisters and I have had open house every Sunday to your boys from overseas. We began this as a duty but it has become a real pleasure and we now look forward to their visits all the week. Pat came out with his friend Rip Ford and they kept us amused all the afternoon and evening. I only hope they enjoyed it as much as we did. Pat looks so well and so very smart in his uniform. He appeared to have had an uneventful passage over and was so interesting In telling us his impressions. Unfortunately they do not remain here for long, so we very rarely see them more than once, but we have told Pat to let us know If he should return and if we can ever help him in any way we shall be only too pleased to do so. We only wish we could do more for them--we feel we owe so much to them and can repay so little.

"I hope the time will come when we can show them real hospitality. Our lives are so strange these days. No maids in the house--and everything so different to the normal--the only thing which has not changed is the welcome we extend to them all--nothing can alter that.

"I do realize how you will be missing Pat and I pray he may be spared to you and will return none the worse for his great sacrifice."