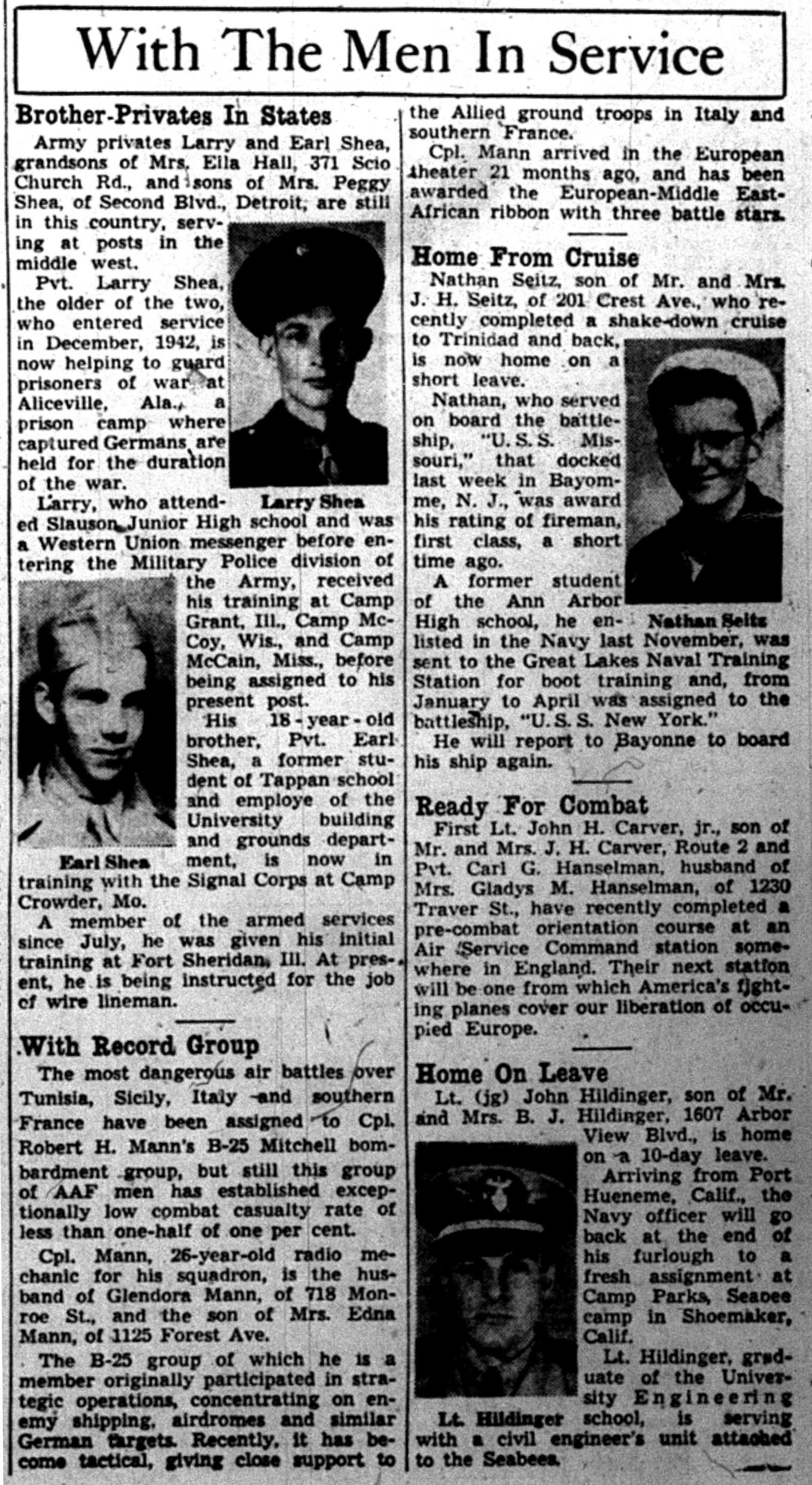 ﻿With the Men In Service

Army privates Larry and Earl Shea, grandsons of Mrs. Ella Hall, 371 Scio Church Rd., and sons of Mrs. Peggy Shea, of Second Blvd., Detroit, are still in this country, serving at posts in the middle west.

Pvt. Larry Shea, the older of the two, who entered service in December, 1942, is now helping to guard prisoners of war at Aliceville, Ala., a prison camp where captured Germans are held for the duration of the war.

Larry, who attended Slauson Junior High school and was a Western Union messenger before entering the Military Police division of the Army, received his training at Camp Grant, Ill., Camp McCoy, Wis., and Camp McCain, Miss., before being assigned to his present post.

His 18-year old brother, Pvt. Earl Shea, a former student of Tappan school and employee of the University building and grounds department, is now in training with the Signal Corps at Camp Crowder, Mo.

A member of the armed services since July, he was given his initial training at Fort Sheridan, Ill. At present, he Is being instructed for the job of wire lineman.

The most dangerous air battles over Tunisia, Sicily, Italy and southern France have been assigned 'to Cpl. Robert H. Mann’s B-25 Mitchell bombardment group, but still this group of AAF men has established exceptionally low combat casualty rate of less than one-half of one per cent.

The B-25 group of which he is a member originally participated in strategic operations, concentrating on enemy shipping, airdromes and similar German targets. Recently, it has become tactical, giving close support to the Allied ground troops in Italy and southern France.

Cpl. Mann arrived in the European theater 21 months ago, and has been awarded the European-Middle East-African ribbon with three battle stars.

Nathan Seitz, son of Mr, and Mrs. J. H. Seitz, of 201 Crest Ave., who recently completed a shake-down cruise to Trinidad and back, is now home on a short leave.

Nathan, who served on board the battleship, “U.S.S. Missouri," that docked last week in Bayonne, N. J., was award his rating of fireman, first class, a short time ago.

A former student of the Ann Arbor High school, he enlisted in the Navy last November, was sent to the Great Lakes Naval Training Station for boot training and, from January to April was assigned to the battleship, "U.S.S. New York.”

He will report to Bayonne to board his ship again.

First Lt. John H. Carver, jr., son of Mr. and Mrs. J. H. Carver, Route 2 and Pvt. Carl G. Hanselman. husband of Mrs. Gladys M. Hanselman, of 1230 Traver St., have recently completed a pre-combat orientation course at an Air Service Command station somewhere in England. Their next station will be one from which America’s fighting planes cover our liberation of occupied Europe.

Arriving from Port Hueneme, Calif., the Navy officer will go back at the end of his furlough to a fresh assignment at Camp Parks, Seabee camp in Shoemaker, Calif.

Lt. Hildinger, graduate of the University Engineering school, is serving with a civil engineer’s unit attached to the Seabees.