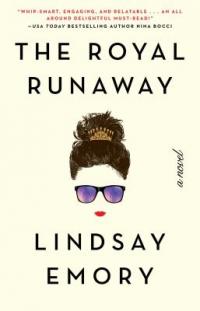 If you never tire of watching Roman Holiday (1953), Audrey Hepburn’s first American film, then you would not want to miss The Royal Runaway * by Lindsay Emory.

Princess Theodora Isabella Victoria of Drieden has a habit of sneaking out of the palace. After being jilted at the altar and sent into exile by her grandmother the Queen, she is back and ready to assume her royal duties as the next in line for the throne. A steamy kiss in a local bar with the sexy Scotsman Nick Cameron seems like a harmless rebound until she learns his true identity. Before she could walk away, he blackmails her into helping him find his missing brother Christian - Thea’s ex-fiancé.

As the pair digs into Christian’s work as a lawyer, they discover a secret that could destroy the monarchy, and the conspirators will stop at nothing to gain the information. “The progressive princess proves to be as resilient as she is rebellious. Even when her throne is threatened, she insists that “human lives are more important than our culture!” Under her reign, “happily ever after” gets a refreshing update. This imaginative, absorbing, and empowering story is a must-read.” (Kirkus Reviews)

"Fans of Heather Cocks and Jessica Morgan's The Royal We (2016), Meg Cabot's Princess Diaries series, and Alyssa Cole's  A Princess in Theory (2018) will enjoy this breezy read."(Booklist)