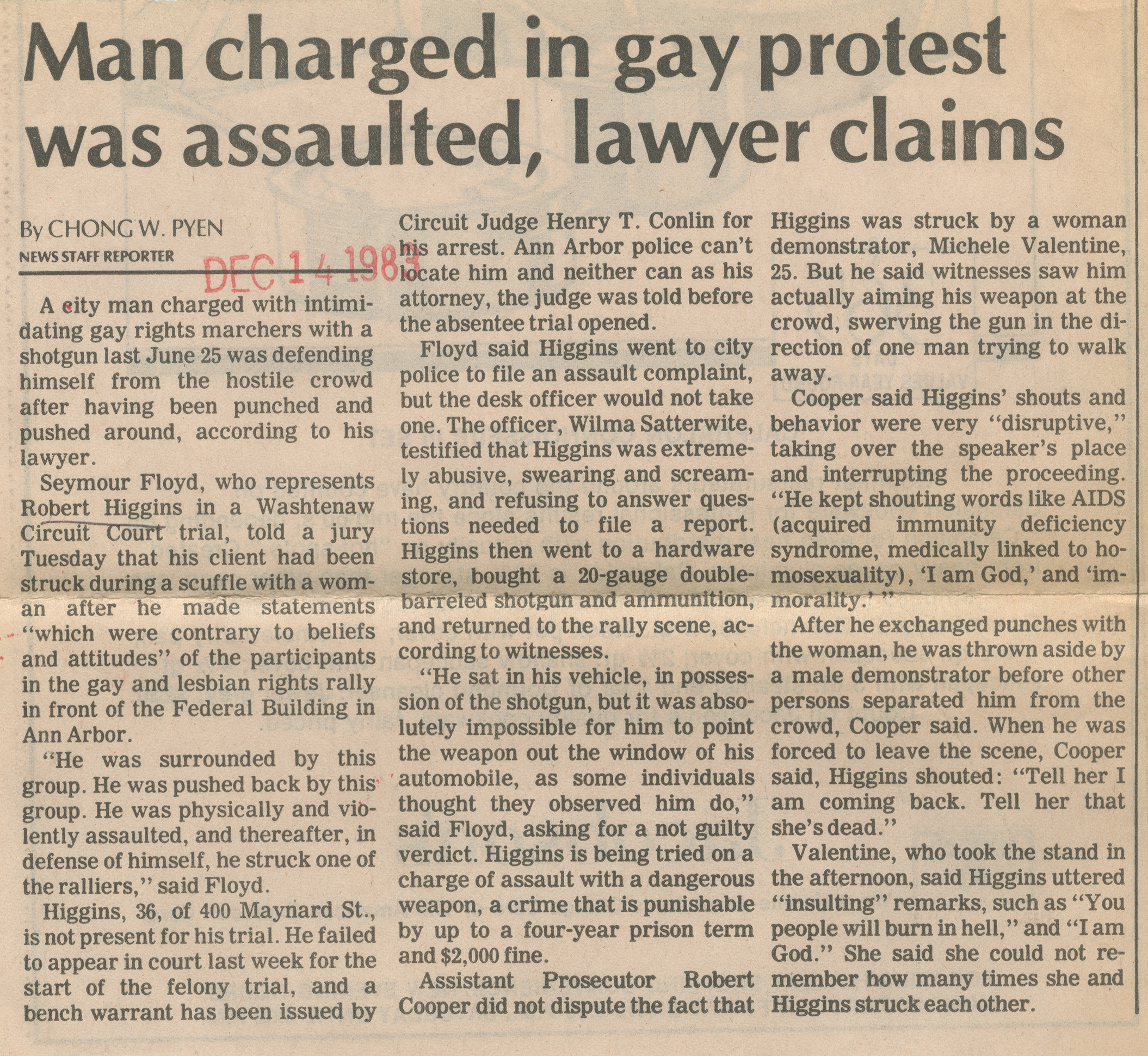 A city man charged with intimidating gay rights marchers with a shotgun last June 25 was defending himself from the hostile crowd after having been punched and pushed around, according to his lawyer.

Seymour Floyd, who represents Robert Higgins in a Washtenaw Circuit Court trial, told a jury Tuesday that his client had been struck during a scuffle with a woman after he made statements” "which were contrary to beliefs and attitudes” of the participants in the gay and lesbian rights rally in front of the Federal Building in Ann Arbor.

Higgins, 36, of 400 Maynard St., is not present for his tria I. He failed to appear in court last week for the start of the felony trial, and a bench warrant has been issued by Circuit Judge Henry T. Conlin for his arrest. Ann Arbor Police can't locate him and neither can his attorney, the judge was told before the absentee trial opened.

Floyd said Higgins went to city police to file an assault complaint, but the desk officer would not take one. The officer, Wilma Satterwite, testified that Higgins was extremely abusive, swearing and screaming, and refusing to answer questions needed to file a report. Higgins then went to a hardware store, bought a 20-gauge double-barreled shotgun and ammunition, and returned to the rally scene, according to witnesses.

“He sat in his vehicle, in possession of the shotgun, but it was absolutely impossible for him to point the weapon out the window of his automobile, as some individuals thought they observed him do,” said Floyd, asking for a not guilty verdict. Higgins is being tried on a charge of assault with a dangerous weapon, a crime that is punishable by up to a four-year prison term and $2,000 fine.

Assistant Prosecutor Robert Cooper did not dispute the fact that Higgins was struck by a woman demonstrator, Michele Valentine, 25. But he said witnesses saw him actually aiming his weapon at the crowd, swerving the gun in the direction of one man trying to walk away.

Cooper said Higgins' shouts and behavior were very “disruptive,” taking over the speaker’s place and interrupting the proceeding. “He kept shouting words like AIDS (acquired immunity deficiency syndrome, medically linked to homosexuality), ‘I am God,’ and ‘immorality.'"

After he exchanged punches with the woman, he was thrown aside by a male demonstrator before other persons separated him from the crowd, Cooper said. When he was forced to leave the scene, Cooper said, Higgins shouted: “Tell her I am coming back. Tell her that she’s dead.”

Valentine, who took the stand in the afternoon, said Higgins uttered “insulting” remarks, such as “You people will burn in hell,” and “I am God." She said she could not remember how many times she and Higgins struck each other.